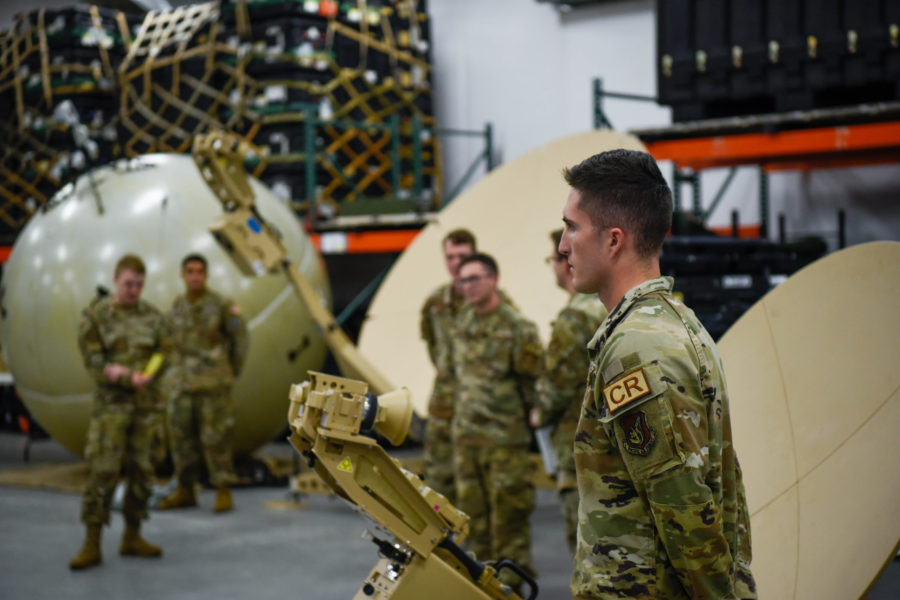 Often referred to as a “flying computer,” the F-35 has sophisticated technological capabilities, but it also requires datalink connections to use and share vast quantities of information at high speed. When the F-35 lands at U.S. Air Force bases, it unloads its data to a server known as the Air Force Network, or AFNet. Maintainers and operators can then study that information to service the jet and record mission data for future planning.

Access to such servers does not exist on remote Pacific islands where the fifth-generation fighter would have to operate to exercise the concept of agile combat employment, or ACE.

But leaders of the 644th Combat Communications Squadron at Andersen Air Force Base, Guam, heard Air Force Chief of Staff Gen. Charles Q. Brown Jr.’s call to take risks, and to not be afraid to fail, and they proposed a unique test and evaluation to address the problem.

“When Gen. Brown says, ‘Accelerate change or lose’—when he says, ‘Hey, get rid of bureaucracy’—to me, that is like carte blanche,” 644th CBCS commander Lt. Col. Anthony Butler told Air Force Magazine in a June interview at Andersen.

“We are empowered to get after these problems that have been problems for a long time,” he added.

Butler knew that the kind of network a combat communications squadron sets up in an expeditionary environment is limited in bandwidth and the applications it can perform.

“The F-35 is essentially a flying data center,” he said.

“There are a lot of network dependencies that we [need] to allow that F-35 to function at its peak level,” he added. “That was one of the challenges when I came to this job that I saw: ‘Hey, advanced technologies, advanced applications, being put in an austere location,’ and me, as an expeditionary communicator, enabling that capability.”

Butler started a working group to approach the problem. With PACAF funding, a team of five spent 30 days at Eielson for a test and evaluation of existing expeditionary capabilities with the F-35.

We Just Have to Ask, ‘Pretty Please’

The 644th comms personnel got together and talked about what the requirements would be and what limiting factors they faced. They reached out to several units, including the Defense Information Systems Agency, the 26th Network Operations Squadron (26th NOS), the 83rd NOS, the 690th NOS, the 561st NOS, and Lockheed Martin contractors to explain to them how the F-35 information systems work and the data flows and timelines required to achieve the mission.

“We were tasked by PACAF … to come up with a solution that would enable the F-35s to operate solely off our technical communication networks,” Capt. Antonio Payne, who served as the team leader, said in a July telephone interview.

“What’s different about this AOR [area of responsibility] is there’s a bunch of islands where a bunch of jets and a bunch of people go to,” said Tech. Sgt. Austin Jeanneret, explaining how the model they sought to design needed to work for the ACE hub-and-spoke concept. That meant setting up a deployed base location with several sites, all remote, all using the same expeditionary network.

The jets would not be co-located with the combat communications systems at the hub.

Jeanneret has spent nine years of the dozen in his Air Force career setting up expeditionary communications networks with nothing more than the 560 pounds of equipment in the kit. He was after a solution that would work for F-35s from the Air Force, Navy, Marine Corps, and some foreign nations.

“If they forward deployed out, no matter where that be, they can still reach back into that location that we’re primarily at,” he said of the hub.

First the team looked at the requirements.

“What are your data timelines?” he said was the first question asked of the Lockheed Martin contacts. “You need to get information from Point A to Point B in what amount of time with what amount of speed, and you need to have all that available in what time?”

“We just have to ask, ‘Pretty please, can we get access?’ Then you run into a lot of bureaucracy, and then at the end of it, you get access,” he said of the steps taken to request more satellite bandwidth to run the operation.

Tech. Sgt. Michael Lopez, a radio frequency transmission systems operator, was charged with setting up satellite communications terminals at Eielson, simulating a deployed environment. The hub had an 8-foot inflatable GATR satellite antenna while the spokes had smaller satellite dishes.

Then, Eielson switched its data transmission to the combat communications network.

“It was a lot of data, but I don’t think it’s something that we’ve ever looked at before,” he said. “We kind of had to see how much data was going through it to see if we needed to increase that with our service provider.”

The team gathered the data, ran tests, monitored the timing and data flows being pushed, and assured that those were available back to the warfighters.

“We needed to kind of know and kind of stretch to see how much the F-35 on our system, how much data they were using up,” said Payne. “And if they were using it, would we also be able to provide services to other people that will be operating on our network?”

In all, the technical communications networks pushed through roughly 50 gigabytes of data from about 100 F-35 sorties over seven days.

“You talk about folks at the lowest levels being enabled? Yeah, like I said, this was led by a captain, three tech sergeants, and a civilian,” he added. “I’ve seen the benefit of leaders empowering their folks. Giving left limits, giving right limits, and giving them commander’s intent. And watching the amazing things they did.”

With a small adjustment to the kits, the 644th Comms team created a solution for PACAF’s F-35 operations wherever they may fly globally.

Butler said PACAF employed the lessons learned in planning for the Valiant Shield exercise in June, which used F-35s in hub-and-spoke operations on the island of Palau in the South Pacific.

“You know about certain bases if you are an adversary,” Jeanneret said. “What this enables us to do is drop an F-35 anywhere around the globe at any time.”