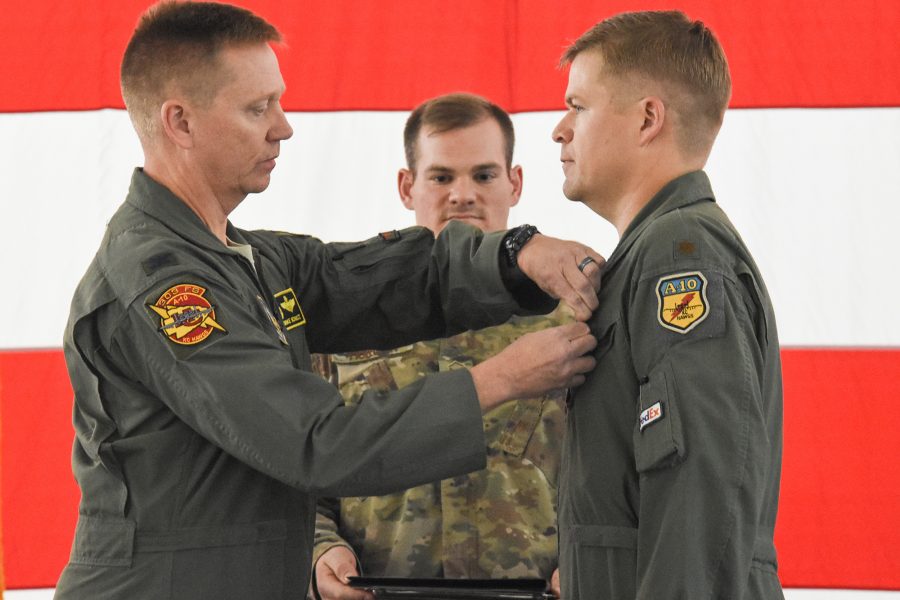 Two A-10 pilots with the 303rd Fighter Squadron earlier this month received Distinguished Flying Crosses with Valor for saving US forces and eliminating dozens of Taliban fighters in 2008 and 2010 battles in Afghanistan.

The pilots, Maj. John Tice and Lt. Col. Anthony Roe, received the awards after a long nomination process that required additional information be submitted for consideration.

On Dec. 2, 2010, Tice was flying alongside another A-10 out of Kandahar Airfield when they were tasked with helping two US Army Special Forces teams that were watching over Army engineers building a bridge in the Helmand River Valley, the release states. While flying armed overwatch, Tice saw a Taliban scout and alerted a joint terminal attack controller on the ground. The Special Forces team neutralized the scout, and then a Taliban group nearby ambushed the US forces with rocket-propelled grenades, heavy machine guns, and small arms fire.

Roe received his award for his actions on June 5, 2008, when he flew out of Bagram Airfield to support a resupply convoy.

During the flight, he and his wingman saw four vehicles on a north-south road, and another four further up the same road. Using the aircraft’s FM radio, Roe contacted the commander of the platoon on the ground and learned that the first four vehicles were disabled after being hit by rocket-propelled grenades. Over the radio, Roe asks the platoon to mark a target for him with a smoke grenade on the ridgeline.

Ensuring that friendlies weren’t in the way, Roe declared Emergency Close Air Support—a declaration that made him fully responsible for any attack, according to the release.

Roe flew in close to the ridgeline, firing the GAU-8, which impacted too high. This, Roe discovered, was because of a critical targeting elevation system error. He then manually entered the elevation, returned to the target, and fired seven rockets at the enemy position, which was about 40 meters away from the friendlies, the release states.

The firefight lasted about an hour, and Roe’s close air support helped save 16 soldiers. The soldiers, part of the 201st Engineering Brigade of the Kentucky Army National Guard, said they were down to their last clip of ammunition when the A-10s arrived, according to the release.

The award presented to Roe this month is his third DFC, according to his wing.