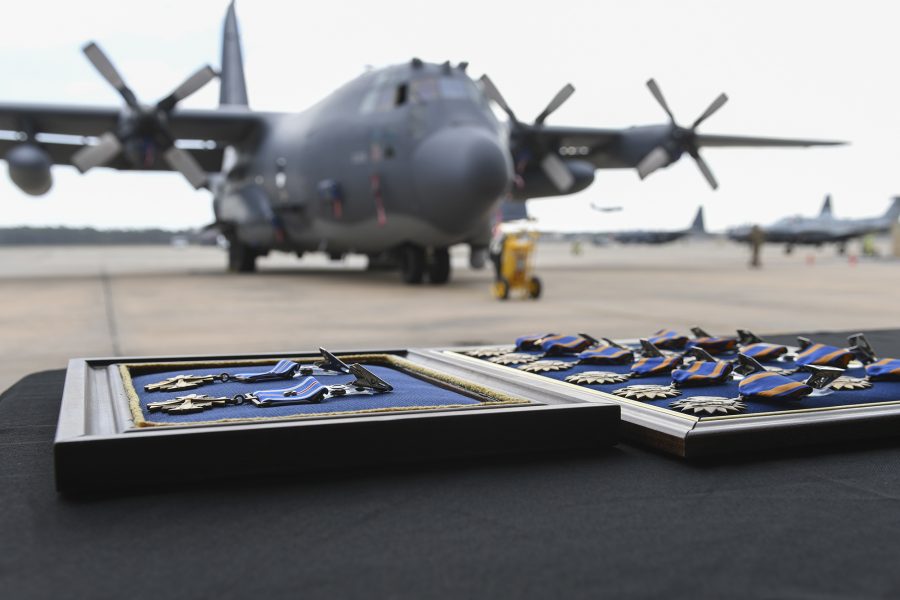 An AC-130U Spooky crew provided more than nine hours of air support to special operations forces, enabling the rescue of 15 patients during a mass casualty evacuation as part of an April 2019 mission in Afghanistan.

During a March 2 ceremony at Hurlburt Field, Fla., the aircrew from the 4th Special Operations Squadron received 14 medals for their role in the mission: two Distinguished Flying Crosses with the “C” device, and 12 Single Event Air Medals with the “C” device. The “C” device denotes the award is for actions in combat.

On April 3-4, 2019, the AC-130U “Spooky 41” responded to a call for help from special tactics operators on the ground in Nangarhar Province, a hotbed for ISIS-Khorasan fighters. Special operations forces were taking heavy fire and casualties following an improvised explosive device attack, according to an AFSOC release.

The gunship began firing on the enemy fighters, with rounds impacting less than 140 meters from friendly forces on the ground, as three medical-evacuation helicopters hovered for about an hour, waiting to rescue 15 personnel, according to AFSOC. Thanks to the AC-130U, enemy fighters did not fire one shot at the helicopters.

The air support, in addition to enabling the evacuation, also helped clear ISIS-K fighters from the region and protect the special operations forces. Some of the team on the ground attended the March 2 ceremony.

“Though most will never hear your stories of service and sacrifice, I will always know what you did for my men and I will never forget it,” said U.S. Army Maj. Jared Tomberlin, a Special Forces member who was on the ground that day, according to the release. “When every second mattered, and lives were on the line, everybody was on top of their game in that aircraft—100 percent and then some.”

Army Capt. Benjamin Carnell, a SOF member who was injured in the attack, added, “From the regiment, from the assault force, and more specifically from my wife and my son and my daughter—I want to thank you for your professionalism and for rising to the occasion. Without any of that, I would not have been hoisted out of there and I wouldn’t be standing here in front of you today, so I am indebted to you in a way that I can’t describe.”

The full list of medal recipients and their roles on the mission is: