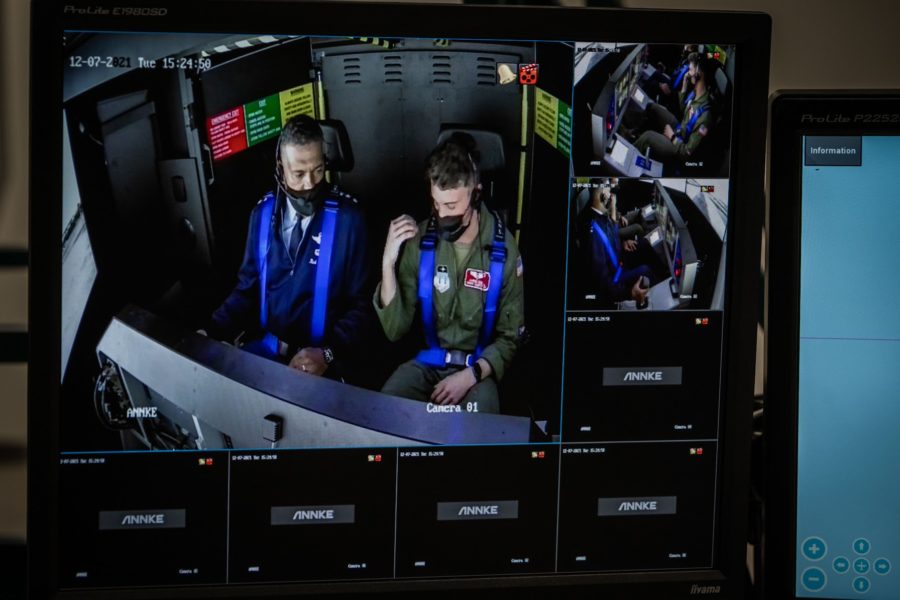 Cadets at the Air Force Academy can now practice flying everything from fighters to blimps while doing more real-world research into aircraft design for the military.

The Academy’s Aeronautics Laboratory unveiled $8 million worth of equipment Dec. 7, including two full-motion flight simulators and a chambered tube for ramming liquid fuels with bursts of air to the point of combustion.

Cadets 1st Class Shane Lindsay, Weston Lusinski, and Joseph McCaffrey addressed a stubborn problem in the development of hypersonic vehicles after the lab received its combustion shock tube: that of low-pressure pockets forming in the vehicles’ combustion chambers at hypersonic speeds, contributing to irregular combustion and “fuel spraying out the back, not igniting,” as Lindsay put it.

Hypersonic engines such as the scramjet in the Hypersonic Air-breathing Weapon Concept pressurize air by ramming into it as they fly.

The Air Force Office of Scientific Research, or AFSOR, gave the Academy $2 million for the combustion shock tube to study the problem. The three Cadets cranked the air pressure down low in one chamber of the tube and added in the fuel ingredient ethylene then cranked the pressure up high in a chamber at the opposite end until the pressure broke a seal and pressurized air traveling down the tube shocked the fuel into combusting.

The Cadets recorded the times until combustion occurred, a puzzle piece that could help confront the challenge of keeping hypersonic vehicles in the sky. They’re aware that military researchers are “expecting good data,” McCaffrey said.

Asked if they planned to apply to MIT for advanced degrees, McCaffrey and Lusinski said they were becoming pilots while Lindsay plans to join the Space Force—and that dynamic makes the Academy’s research enterprise unique, said Col. Christopher K. McClernon, the Academy’s associate dean of research.

Research at the Academy exposes future officers to the real work that happens in science and technology development while giving back to the military in terms of their findings. It’s a “recent direction we’ve been going,” McLernon said, recalling his own time as a Cadet graduating in 1999 when “we didn’t have this laser-focused military customer direction we do now.”

McClernon said AFSOR contributes smaller amounts every year to seed research projects, but it may then back those projects with more money later as the research advances, such as in the case of the combustion project. The Air Force Research Laboratory, DARPA, the National Science Foundation, the Army, and the Navy have all funded research at the Academy, which extends well beyond aeronautics.

The Aeronautics Laboratory is one of the Academy’s 24 research centers and institutes that study the likes of humanities, social sciences, biology, chemistry, and physics.

The Academy invested it own money into two full-motion flight simulators, both two-seaters, worth a total of $6 million and only about a month old. Unlike typical simulators that reproduce the experience of flying one type of aircraft, these can simulate any aircraft as long as Cadets input the mathematical equations representing the characteristics, such as weight, inertia, and aerodynamics.

Senior-year Cadets completing capstone engineering design courses will even get to fly their own designs in the simulators before heading out to the flight line with their scaled-down models. Aeronautics Laboratory Director Lt. Col. Judson Babcock suspects fewer “fix” phases will be needed in the course’s “fly-fix-fly” scheme.

All Cadets should get a chance to work with the simulators as part of core aeronautics courses.

Babcock said no one had flown an F-35 in one of the simulators yet but that to experience the controls and the movements of any aircraft is theoretically possible, “from fixed-wing, to vertical lift, to aerostats and blimps.”