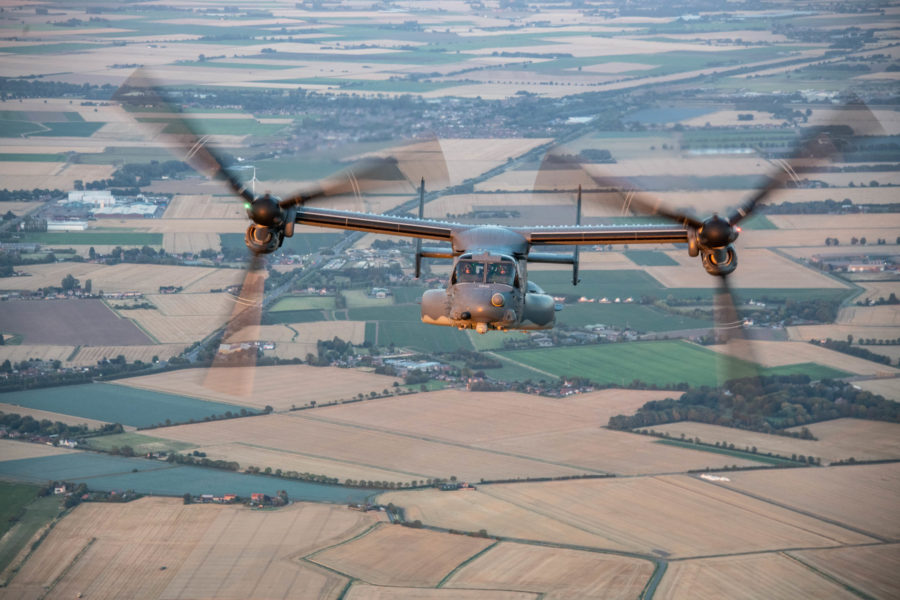 Air Force Special Operations Command grounded its CV-22 Osprey fleet Aug. 16 as part of a safety stand down, with no timeline set for the aircraft to begin flying again, the command confirmed to Air Force Magazine.

News of the stand down was first reported by Breaking Defense.

Hard clutch engagement involves the clutch connecting the rotor gear box to the engine slipping, then catching hard, causing the aircraft to lurch.

The two incidents in the past six weeks came after two in the previous five years, Heyse said. No injuries have been reported as a result of the incidents, “due in large part to the skill and professionalism of our Air Commandos who operate the CV-22,” Heyse said.

AFSOC hadn’t yet gathered enough engineering data analysis to identify the cause of the issue, “so it’s unknown if it’s mechanical, design, software or some combination of any of those,” Heyse said.

And until a root cause is determined and risk control measures are put in place, “no AFSOC CV-22s will fly,” she said. Ultimately, “the goal is to determine a viable long term materiel solution,” she added.

The Marine Corps and Navy both operate their own versions of the Osprey, and AFSOC has been in contact with Naval Air Systems Command about the issue, Heyse said, deferring comment on any stand down of those aircraft to the respective services.

AFSOC has more than 50 Ospreys in its fleet, based out of Cannon Air Force Base, N.M., Hurlburt Field, Fla., Kirtland Air Force Base, N.M., RAF Mildenhall, U.K., and Yokota Air Base, Japan. The CV-22’s tiltrotor design allows it to take off and land vertically but pivot its engines forward for higher-speed and longer-range horizontal flight.

The aircraft has generated controversy with its safety record, however. Within the past six months, nine Marines have died in two separate crashes on board the MV-22 Osprey.

The CV-22’s stand down marks the second such grounding of Air Force planes in recent weeks, as Air Combat Command just recently cleared its F-35As to begin flying again after conducting inspections for a faulty ejection seat part.