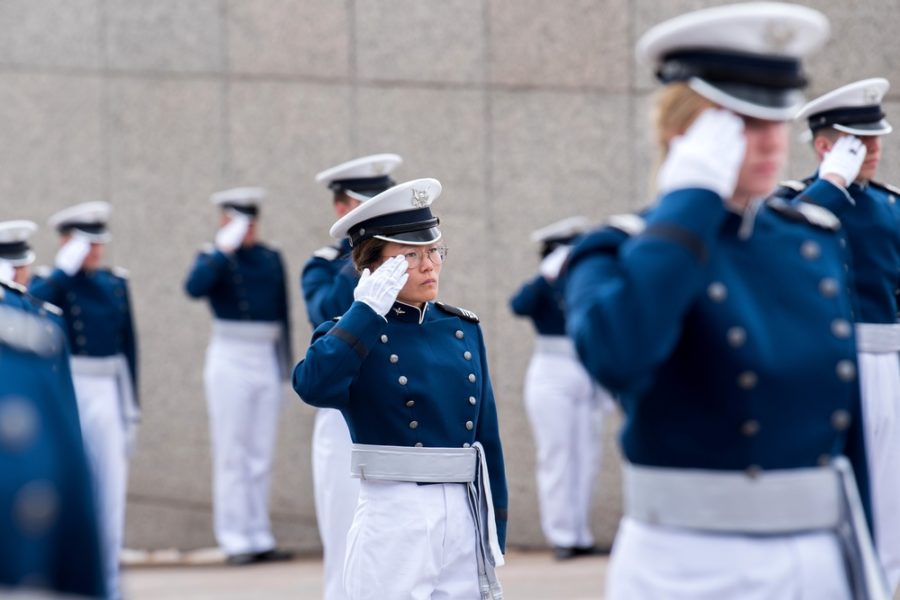 Yet “Azimuth” would go beyond just evaluating prospective Guardians by also helping to inform and motivate cadets—in part, with unique opportunities that would only become available in real life to future astronauts.

Pending approval of a three-week pilot by senior Academy leaders, Azimuth would kick off in the summer of 2022 with 20-30 cadets, delivered in weekly segments each intended to “motivate, inform, and evaluate,” Space Force liaison to the Academy Col. Jeffrey Greenwood told Air Force Magazine.

“We would do things that are getting cadets excited about space in general,” Greenwood said.

Ideas for Week 1, considered the motivational week, include experiences simulating what it’s like to go to space, such as a “zero-G” free-fall, virtual reality, or scuba training—“very much like what the NASA pre-astronaut program would be,” Greenwood said. “A lot of this, the fun motivational stuff, came from, ‘What are astronauts going through?’”

Critics have told Greenwood that astronaut training has no relationship to the jobs Guardians are now doing, but he counters that it may in the future.

“We also don’t jump out of airplanes as Air Force members, but that is one of our airmanship programs here at the Air Force Academy,” he said. “The reasoning or rationale behind doing things [is] eventually, someday, we might have a human spaceflight mission. So not only is it very motivational for cadets to get them excited about space in general, but it may have applicability in the long term.”

Greenwood is working with the head of the astronautics department at the Academy, Col. Luke Sauter, who counts among his students’ activities controlling an active satellite in orbit.

“Azimuth is the summer program that we’re coming up with to really give more cadets exposure,” Sauter explained during a visit to his classroom, which is encircled by models of past Academy satellites and situated near a clean room where cadets build the next Academy satellite to place in orbit.

“It’s a chance to get motivated, excited, informed about space—but also evaluate them to see if they’re the kind of people we want in the Space Force,” he added.

Week 2, conceived as the informative week, might involve visiting some of the military space facilities near Colorado Springs, current home to U.S. Space Command and two of the Space Force’s field commands, Space Operations Command and Space Training and Readiness Command. Cadets would have the opportunity to speak to Guardians and learn what they do.

Week 2 also might include aspects of their curriculum, such as orbitology and warfighting in the space domain.

“At the end of that week, we would have some type of wargames where they’re starting to use the strategy piece of everything that they learned in that week,” Greenwood said, describing how cadets could compete against each other as red teams and blue teams.

Week 3 is the evaluation week. It could include teamwork training, tests such as leadership reaction and high ropes courses, a maze, and possibly sensory deprivation training.

“We just want to understand their propensity for being able to understand and do well in our environment, as space Guardians,” Greenwood said.

Another difference between Leatherneck and Azimuth is when in their academic careers students decide which service to pursue. Leatherneck takes place between a student’s junior and senior year, with students deciding if they want to become a Marine during their senior year. Air Force Academy cadets must decide in their junior year, meaning the program must take place the summer after their sophomore year.

“The problem with that is it’s really still very early in their time here,” Greenwood said. “They’ve had two years’ worth of academics under them. They haven’t even taken their core astro course yet. It’s somewhat difficult to have to make them have to step up and say, ‘Yep, I want to go Space Force.’”

“He is just standing by ready to support with whatever we need to get this rolling,” Greenwood said.

The program would culminate in an ROTC-like interview experience.

“So, rolling into their junior year, we’ve got their record, we’ve got how they did during Azimuth, and we’ve got an interview under their belt,” Greenwood said. “We kind of have a pretty decent pool that we’re now looking at to make our selections during that junior year.”

With the formal paperwork to be filed in September, Greenwood expects approval for the pilot program in the next couple of months. Once approval is granted, the Academy will reach back out to students who have expressed interest in Space Force and have been taking part in mentorship programs during their first two years.

“Azimuth would be a screening program. You would know that you were a candidate for the Space Force by entering the Azimuth program,” Greenwood said.

Greenwood said the Pentagon is still evaluating how to divvy up high-scoring candidates between the Space Force and Air Force. Internal debates are taking place between Air Force and Space Force personnel chiefs and the Department of the Air Force assistant secretary for manpower and reserve affairs, he said.

“We’re still working out at the Pentagon level between the A1 and S1 and MR, really how we make the selections,” he said. “There’s some inner fighting right now that we’ve got to work through, in terms of, you know, ensuring that the Air Force and the Space Force get their fair share of talent.”

Ultimately, someone 150 cadets of a class of 1,000 may be invited to participate in Azimuth, a number large enough for the Academy to whittle down selections to the available 96 Space Force slots it has to fill.

The program will add to the spectrum of summer opportunities designed to prepare cadets for careers in the Space Force, Sauter said.

“We are helping to inform cadets about what these careers look like,” he said. “We have many opportunities where we send cadets to Space Force jobs, to Air Force research jobs, to contractors that are working for the Space Force, to give them a feel of, ‘What does real life look like?’ And so, we get them excited and informed during the summer, and then they’ll come back here even more jazzed.”