Skip to content
Air Force Basic Military Training graduates parade in front of friends and families July 22, 2021, the first graduation with guests since the start of the COVID-19 pandemic. Screenshot photo.
Expand Photo 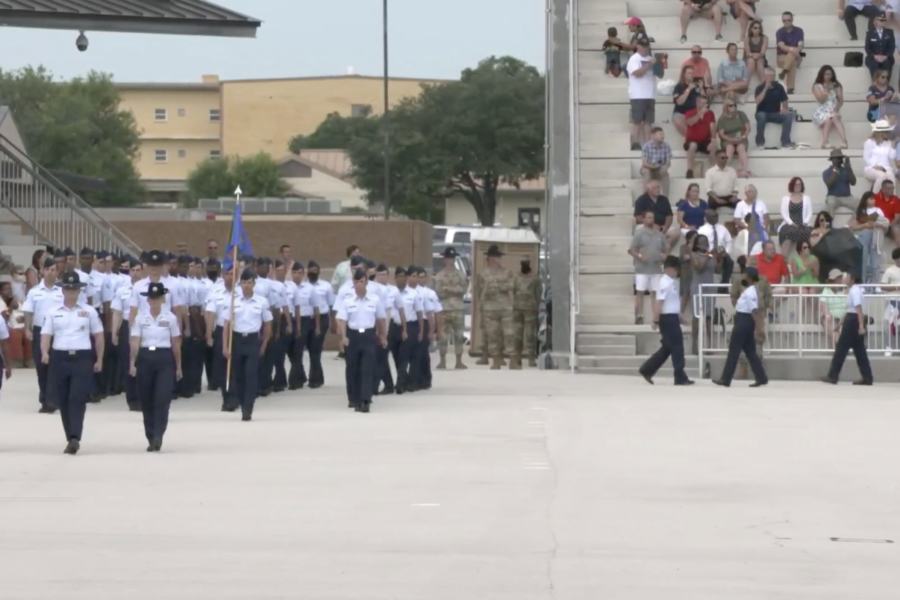 For the first time in more than a year, family and friends were able to gather in person July 22 to watch as loved ones graduated from Air Force Basic Military Training.

Restrictions were still in place at Joint Base San Antonio-Lackland, Texas, to prevent the spread of COVID-19, but the inclusion of several hundred guests in the stands still made for a celebratory atmosphere and a stark change after 16 months of ceremonies without crowds. The last ceremony with guests was March 13, 2020.

Each graduate was limited to two invited guests, and all guests had to show proof of COVID-19 vaccination, with their last shot coming at least 14 days before the ceremony. Fully vaccinated graduates were also allowed off-installation liberty to celebrate with family and friends.

“This day has been a long time coming,” Maj. Gen. William A. Spangenthal, deputy commander of Air Education and Training Command, told the July 22 attendees. “And I’m perfectly fine if y’all want to show some enthusiasm—get a little undignified, if you will. …

“The reason that we’ve been able to get here is because we’ve had this unbelievable partnership and fantastic leadership between three wings—the 502nd Air Base Wing, the 59th Medical Wing, and the 37th Training Wing. These young Airmen, just seven and a half weeks ago, our nation’s treasure, your sons and daughters, your brothers and sisters, and your friends: You entrusted us to keep them safe during this extraordinary time.”

“After nearly 16 months without an in-person graduation, we are beyond excited to welcome you all back,” Wilson said just before administering the oath. “While the timeframe of 16 months weighs heavily on this ceremony, the most important timeframe, and the reason that we are here today, is the last seven-and-a-half weeks of training these men and women have just gone through to make them not only Airmen, but also better, stronger, and more resilient Americans.”

The festivities come roughly two months after the Air Force Academy hosted guests for its spring graduation ceremony, its first time allowing outside guests, with eight permitted per graduate.

The gradual return to normalcy comes as nearly 300,000 members of the Air Force and Space Force, including the Air National Guard and Air Force Reserve, have received at least one dose of a COVID-19 vaccine, according to the latest data from the Defense Department. Back on June 30, DOD announced that the Air Force’s vaccination rate was 61 percent, behind the Army and Navy but ahead of the Marine Corps.