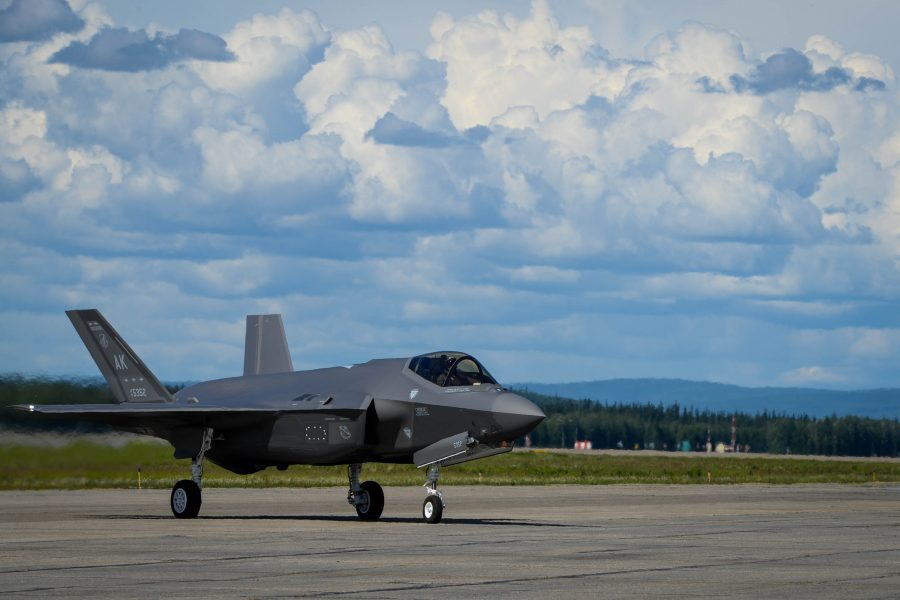 The Air Force will likely receive its 250th F-35A at the end of August, having already become the third-largest fighter fleet in the Air Force inventory, according to new numbers from the Joint Program Office.

The service accounts for nearly half of all the F-35s of all variants delivered worldwide, so far.

As of June 11, the Air Force had taken delivery of 241 F-35As, which are deployed in training, testing, and operational squadrons, according to a July 1 statement from the Joint Program Office. At a delivery rate to the Air Force of about five per month, the service should expect to accept its 250th jet before September. The most recent examples have been delivered to Eielson Air Force Base, Alaska. The Air Force’s program of record is to eventually buy 1,763 F-35As. It has requested 48 of the jets in the last three budgets, and Congress has increased the purchase in recent funding cycles.

USAF’s F-35A total now makes it a larger fleet than that of the F-15C/D Eagle, of which USAF has 234 still in service. The F-16C/D Falcon remains the largest fighter force with 938 aircraft in USAF service, followed by the A-10 Thunderbolt with 281. The F-15E Strike Eagle inventory is fourth, with 218 aircraft, and the F-22 Raptor fleet numbers about 180 aircraft. If it remains on pace, the F-35 will surpass the A-10 fleet in size before next spring.

The Marine Corps is world’s second-largest operator of F-35s, fielding 93 F-35B short takeoff and landing models and 13 F-35C carrier-capable airplanes. The Navy has accepted 28 F-35C models. All told, there are 375 F-35s of all types in U.S. service, not counting those delivered in the last month. The Navy and Marine Corps together plan to buy 693 aircraft of the B and C models combined.

Five of the original non-U.S. partners still in the program have accepted F-35s so far. Australia has 26 F-35As and Norway has 25. The U.K. has 18 F-35Bs and the Netherlands has 10 F-35As. Italy is buying both A and B versions with 12 and three delivered, respectively.

Turkey, which is no longer in the program due to its controversial purchase of Russian air defense systems, had six aircraft built in the U.S. Those will not be delivered to Turkey, and their disposition is still being discussed. A proposal in the Senate’s 2021 defense bill calls for the aircraft to be turned over to the U.S. Air Force.

A Pentagon spokeswoman confirmed on July 2 that Turkey will continue to deliver on contracts for 139 parts through 2022. This decision was made “to avoid costly, disruptive and wasteful contract terminations.” She said the Pentagon has made “substantial progress in the stand-up of alternate sources” for F-35 parts and sub-assemblies made by Turkey. The biggest of these is the center fuselage, which will equip aircraft through Lot 14. Other Turkish components that will be made into 2022 include electronic wiring harnesses and the brackets that hold them, as well as compressor rotor hubs for the F135 engine and seals for the air turbine.

The U.S. government does not release the specific numbers of F-35 deliveries to Foreign Military Sales countries, but 59 overall have been delivered to FMS customers so far. Those countries include Belgium, Israel, Japan, Poland, and the Republic of Korea. Japan’s order is the largest, planned at 105 A models and 35 B versions. Israel plans 50, Belgium expects 34, and Poland plans to buy 32. South Korea expects to buy 40, though additional air frames are being considered.