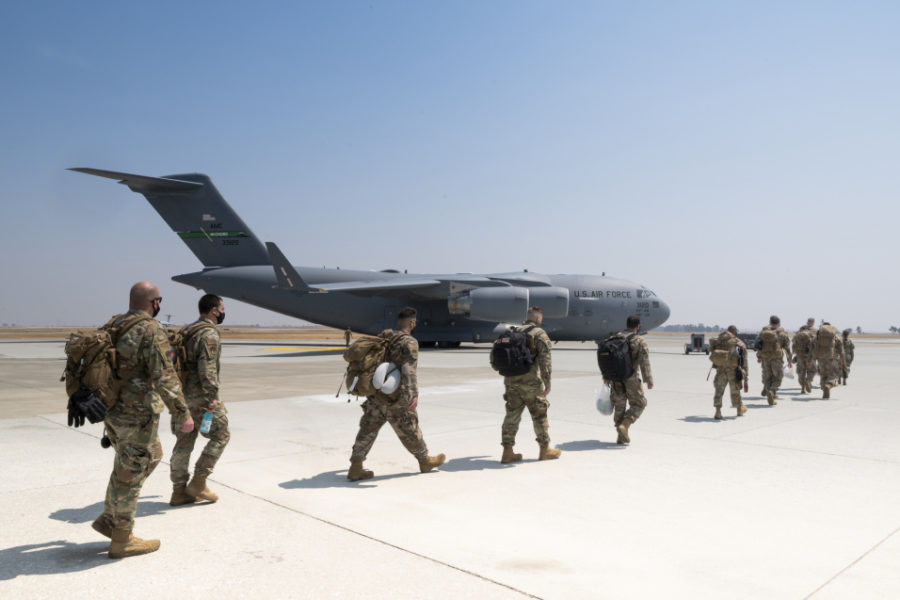 These Airmen Closed Down Bases in Afghanistan. Now They’re Back to Run the Evacuation

A specialized emergency response team, which was called upon months ago to close down bases in Afghanistan, is back in the country to help bring Americans and partners out as the Taliban surrounds the last remaining U.S.-controlled airfield.

The Pentagon announced Aug. 18 that Airmen with the 621st Contingency Response Group at Joint Base McGuire-Dix-Lakehurst, N.J., are deploying back to Afghanistan, just weeks after returning home, to help run air operations at Hamid Karzai International Airport, where U.S. and coalition airlifters are racing to fly out U.S. citizens and Afghans who have helped with the American cause. Defense Department photographs show Airmen with the 821st Contingency Response Group from Travis Air Force Base, Calif., also deploying. They, too, recently returned home from Afghanistan.

“This is a dynamic Air Force unit highly specialized in the rapid deployment of personnel to quickly open airfields and establish, expand, sustain, and coordinate air mobility operations,” Pentagon spokesman John F. Kirby said Aug. 18. “So, this is a group that knows how to run airfields and can help with the actual air operations on the ground.”

A CRG comprises on-call teams of Airmen who deploy on short notice to analyze an airfield and set up operations. It includes air mobility liaison officers, who coordinate with ground forces, and multi-capable Airmen who can coordinate air operations, provide security, on and offload aircraft, and conduct other missions.

At Hamid Karzai International Airport, they will run a constant flow of C-17s, C-130s, and international airlifters at the one-runway airstrip in a city now surrounded by Taliban.

Air Force Magazine spoke exclusively with some Airmen who served in this mission before the Taliban’s advance.

Col. Daniel Mollis, Task Force 74 commander and deputy commander of the 621st Contingency Response Group, called the drawdown the unit’s “Super Bowl,” saying in an early August interview that everything the community does was “coming together in terms of our capabilities.”

Contingency response Airmen got orders to quickly deploy to Afghanistan as President Joe Biden announced the withdrawal plan in April. The group built its teams and orders within 72 hours of the President’s announcement and was on the ground in Afghanistan in just 10 days—most of those in a restriction of movement due to COVID-19.

“It’s not hard to fill our requirements. This was something that everyone was ready to go do—and ready to drop everything, no notice, and go execute this mission,” he said.

The task force sent teams to airfields and forward operating bases across the country to bring out sensitive equipment and people, while also repairing airfields for operations and providing security. The teams dispersed to locations with very limited communications, operating on “mission-type orders” to bring out equipment, personnel, and themselves without regular command and control.

“[On a] tight timeline, with limited personnel, we have limited capability and equipment … and you have a constant airflow that we have to maintain in order to continue that timeline,” Mollis said. “So when things like that happen, where a runway needs repair and we don’t have the [civil engineer] capabilities on hand, that’s when that mindset steps in that, well, we’re going to figure out how to do it safely, but we’re going to get it done.”

The small numbers of Airmen have to do everything to conduct those operations and to scale based on the size of the installation—from a FOB to Bagram. “Because, eventually we had to get ourselves out the door,” he said. “So, you’re slowly decreasing your scale while conducting the retrograde. So, to me, it’s almost like taking apart the aircraft as you’re still flying.”

The task force did not have the “clearest definition of requirements, or what we had to go do,” just a timeline from the joint force commander. “And that happens often with our mission … When there’s a gap, we’re called. We are a good force to be called upon to go execute and fill those gaps and seams.”

For Mollis, that initial withdrawal was the “culmination” of his career.

“It was the opportunity to do something that really made the entire, multiple decades, matter, and that’s what carried me through what was also the hardest thing I’ve ever done in my life. But it was truly an honor to see what these Airmen accomplished,” he said. “I feel that I asked way too much on a daily basis, and they exceeded it every day.”