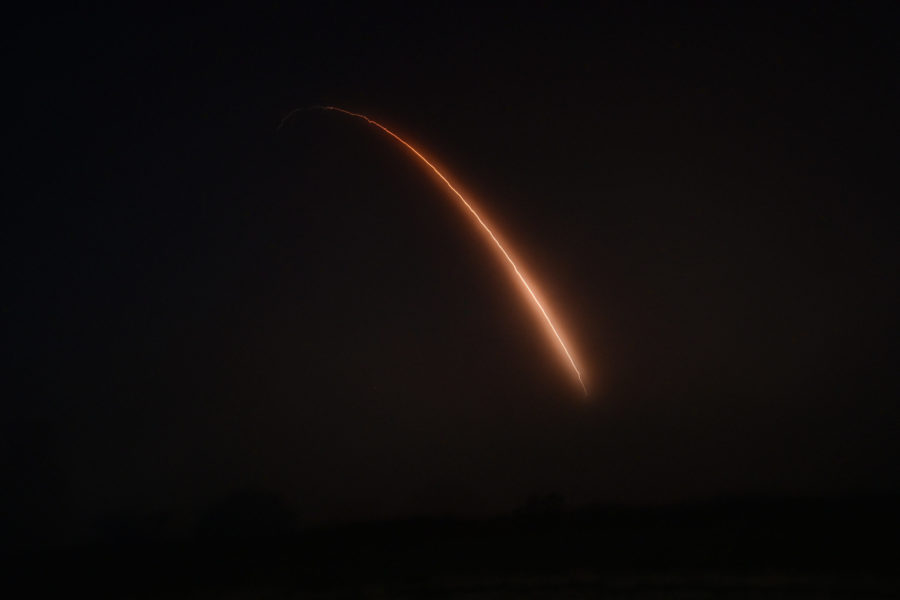 The launch from Vandenberg Space Force Base, Calif., took place at 12:49 a.m. Pacific time. The ICBM reentry vehicle traveled approximately 4,200 miles to the Kwajalein Atoll in the Marshall Islands, AFGSC announced in a press release.

Airmen from the 625th Strategic Operations Squadron at Offutt Air Force Base, Neb., and Sailors from the Navy’s Strategic Communications Wing executed the launch on board a Navy E-6B Mercury aircraft using the Airborne Launch Control System.

“This scheduled test launch is demonstrative of how our nation’s ICBM fleet illustrates our readiness and reliability of the weapon system. It is also a great platform to show the skill sets and expertise of our strategic weapons maintenance personnel and of our missile crews who maintain an unwavering vigilance to defend the homeland,” Col. Chris Cruise, 576th Flight Test Squadron Commander, said in a statement.

AFGSC emphasized in its release that the test launch “is not the result of current world events,” and in a separate release, Space Launch Delta 30 indicated that the launch had been scheduled years in advance.

That schedule shifted slightly, however, when Speaker of the House of Representatives, Rep. Nancy Pelosi (D-Calif.), led a Congressional delegation on a visit to Taiwan in early August.

That visit, the first by a Speaker to the island in 25 years, drew a fiery response from China, which considers Taiwan a rogue province and rightfully its territory. The Chinese launched military exercises all around the island. U.S. President Joe Biden, seeking to avoid escalating tensions, announced Aug. 4 that the Minuteman III test would be delayed.

China is still conducting military exercises around Taiwan after another U.S. congressional delegation visited the island, but the Minuteman III test took place 12 days after the initial postponement.

That stands in contrast to earlier this year, when the Pentagon first delayed, then canceled, an ICBM test entirely to avoid potential miscommunication and escalation. In March, the Defense Department postponed a test in the early days of Russia’s invasion of Ukraine, as Russian President Vladimir Putin raised tensions by putting his nuclear forces on high alert. In April, the Air Force announced that the test had been canceled.

The last publicly announced test launch was in August 2021.