Skip to content
Will Roper, the Air Force's assistant secretary for acquisition, technology, and logistics speaks with Col. Nathan Diller, the team lead for Agility Prime, on April 27, 2020, during the kick off of the week-long Agility Prime virtual conference. YouTube screenshot.
Expand Photo 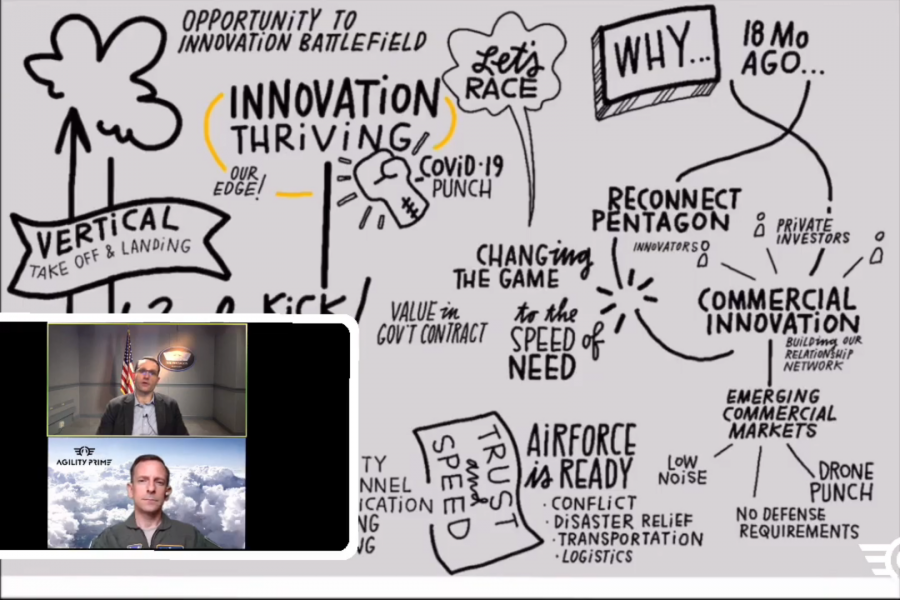 Air Force Kicks Off Its Search for a Flying Car

The Air Force on April 27 kicked off Agility Prime, a new effort to help industry create a “flying car” for both commercial and military.

The goal of Agility Prime is to avoid the “cautionary tale” of a previous transformative technology: small unmanned aerial systems, said Will Roper, the assistant secretary of the Air Force for acquisition, during the virtual event. Early in the development of the personal drones, the Pentagon sat on the sideline without engaging with the companies building the systems. As a result, the supply chain went overseas to China, which now dominates the drone market, and “those foreign systems represent a security risk to us,” Roper said.

With Agility Prime, the Air Force is working directly with companies of all sizes to start the development of an electric or hybrid vertical take-off and landing aircraft, which the Air Force can use for mobility missions and that can eventually be adopted by the broader American public for transportation.

“There is a path for the military market to accelerate domestic use,” Roper said. “We’re putting that out with the launch of Agility Prime.”

This new type of aircraft “represent[s] a truly transformative leap ahead in transportation,” he said. For the Air Force, small commercially produced aircraft can help with special operations missions, search and rescue, point-to-point logistics, and defense support to civil authorities missions.

The first solicitation for the process calls for vehicles with the capability to carry three to eight people at speeds greater than 100 mph, at a range of more than 100 miles, and with an endurance of more than one hour. The service wants first full-scale flights by Dec. 17, with the goal of a small, operational fleet by 2023.

As opposed to traditional procurement processes, where much of the interaction between the service and a contractor comes solely from the transfer of money and requirements, the Air Force wants to be more active in development through the use of its testing ranges and by having engineers actively help with safety issues. Development and regular use of the new technology within the Air Force will in turn build public confidence in the systems, Roper said.

The Air Force has deep history in training and flight certification, and “there’s no better place in the world to think through these different issues,” said Brig. Gen. Clinton Hinote, the deputy director of Air Force Warfighting Integration Capability.

During the weeklong Agility Prime virtual conference speakers from the U.S. Air Force, the Department of Transportation, the Federal Aviation Administration, Defense Innovation Unit, individual companies, and lawmakers will discuss their goals with the development of eVTOL systems and the expected acquisition process.

“Agility Prime will change the game on future battlefields and supply chains,” Air Force Secretary Barbara Barrett said. “The sky is not the limit, it is just the beginning.”

The event will culminate with “the first-ever flying car virtual trade show” and the unveiling of new aircraft on May 1. The service has not yet named the companies that will participate in that event or what designs they will display. Sabrewing Aircraft Company, Inc., which received a $3.25 million contract through the Air Force’s Agility Prime program, however, has said it will unveil its Rhaegal-A on May 1.

The production version of Rhaegal will have “a capacity of a 5,400 pounds (2,450 kg) of payload to and from locations without any runway, bringing tons of cargo to the remotest parts of the world. It has a range of 1,000 nautical miles at altitudes of 22,000 feet (6,700 meters) at speeds of up to 200 knots (370 kph),” according to a company release. “In addition, the Rhaegal can fly like a conventional aircraft, taking off from one airport and landing at another with a payload of over 10,000 pounds (4,500 kg). The aircraft uses electric motors to turn fans within ducts that provide lift during takeoff and landing, but uses a main wing to provide lift during cruise flight.”