Skip to content
Maj. Jacob Rohrbach, a pilot assigned to the 40th Flight Test Squadron at Eglin Air Force Base, Fla., releases the first Joint Air-to-Surface Standoff Missile- Extended Range from an F-16 over the Gulf of Mexico on Sept. 19, 2018. The Stand-off Attack Weapon will complement or succeed the JASSMs. Air Force photo by Master Sgt. Michael Jackson.
Expand Photo 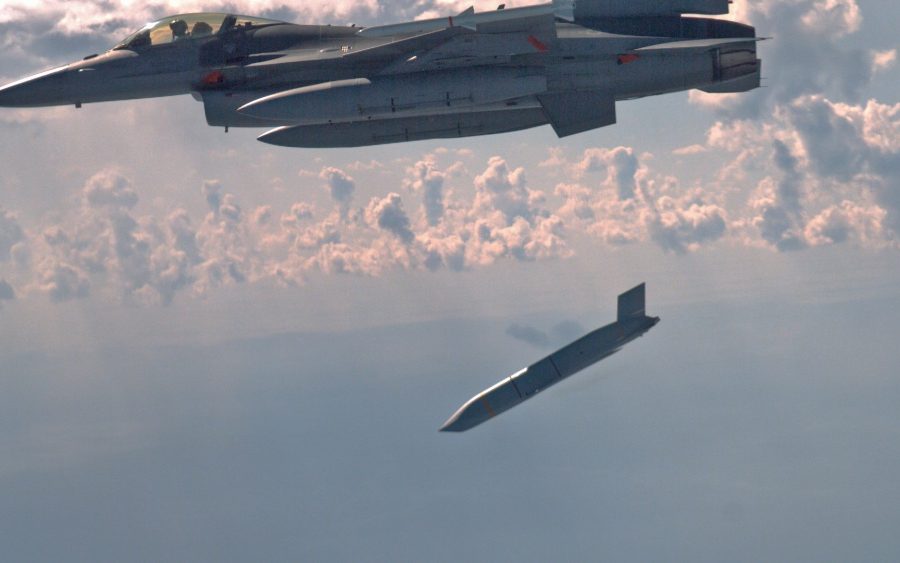 The Air Force is looking for a new, generic weapon, produced by multiple vendors, to affordably attack targets at standoff ranges, with a capability as soon as 2030, according to a service solicitation to the defense industry.

The sam.gov announcement from the Air Force Life Cycle Management Center said the Armament Directorate’s “Disruptive Futures” division is conducting market research for a Stand-off Attack Weapon (SoAW) analysis of alternatives. The Air Force wants to assess the industrial base’s ability to “produce a material solution to this operational objective” with the idea of establishing “a single design for all concepts, with appropriate data rights for the government to potentially distribute the digital design to multiple vendors for production.”

Under the Aug. 23 solicitation, the Air Force wants vendors to submit their ideas in time to discuss the program at an industry day to be held Sept. 27 at Eglin Air Force Base, Fla., where the AFLCMC’s armament division is headquartered.

Prototyping and demonstration activities will likely start in fiscal 2025, with initial fielding “by FY 2030 or FY 2033, as applicable, depending on the associated tech maturity,” USAF said.

Potential vendors are to submit a notional schedule for development and testing, platform integration, and flight testing. The Air Force also wants respondents to quote a notional average unit production price for the weapon, “assuming a production quantity of 500, 1,000 and 1,500 units.”

Responses should include all the particulars of the proposed solution, including  the physical size of the proposed weapon, along with sensors, propulsion type, warhead, controls and actuators, maneuverability, datalink, frequencies used by the sensors, interfaces with aircraft, and how much work has been done already and how much is yet to be done “to support a full scale operational concept.” The weapon will have to be designed using digital methods and have an open architecture permitting any offeror to design software and hardware upgrades.

The service said that if companies don’t respond to this request for information, they won’t be disqualified from competing for the work later.

The solicitation did not disclose a minimum or maximum range for the weapon. The Air Force already fields the AGM-158 Joint Air-to-Surface Standoff Missile-Extended Range (JASSM-ER) and a variant called the Long-Range Anti-Ship Missile, both made by Lockheed Martin, which have a range of nearly 600 miles. The stealthy JASSM is expensive, however, and various studies have pointed out that for a Pacific campaign with thousands of aimpoints, individual standoff munitions with multimillion-dollar price tags will be unaffordable and unsustainable. Standoff weapons offer the advantage of striking key targets without entering the lethal range of the enemy’s air defenses.

The Air Force has in the last two decades pursued a strategy of addressing heavily defended targets with a mixture of single-use standoff weapons and inexpensive, stand-in weapons delivered by survivable/stealthy aircraft that can re-attack many times.

The solicitation follows the Air Force’s award of exploration contracts for a Stand-in Attack Weapon (SiAW) to L3 Harris, Lockheed Martin, and Northrop Grumman in late May. Those contracts were for 90 days, but USAF didn’t say how that program would advance after that period, which expired Aug. 25.

Mark Gunzinger, a fellow with AFA’s Mitchell Institute for Aerospace Studies, has written on the importance of munitions affordability and the right mix of stand-in and stand-off weapons. (See, “Stand-In, Stand-Off,” Air Force Magazine, July, 2020). Gunzinger said the new program is a bit mysterious “but I suspect it could be a mid-range weapon in the SiAW class” for penetrating strikes.

Gunzinger noted that “The need for these mid-range weapons that are survivable and can be carried in greater numbers internally by stealthy aircraft was one insight developed during the Air Force’s ‘operational imperative’ work.”

Air Force Secretary Frank Kendall has set seven “operational imperatives” of systems the Air Force must develop to stay ahead of China. They range from elaborate sensor-to-shooter networks to space capabilities to uncrewed combat aircraft.

The SoAW may also be aimed at something “more affordable than a JASSM-ER,” Gunzinger speculated. “The Air Force needs precision strike ‘affordable mass.’”

At the industry day, USAF said it will conduct “an open forum presentation and question and answer session on SoAW requirements, initial trade space analysis planning, and notional considerations for a follow-on acquisition program.” This will be followed by one-on-one sessions with individual contractors “desiring further clarification and to address any specific questions relevant to their proposed concepts/ approach.” Those answers will be “shared with all contractors,” USAF said.