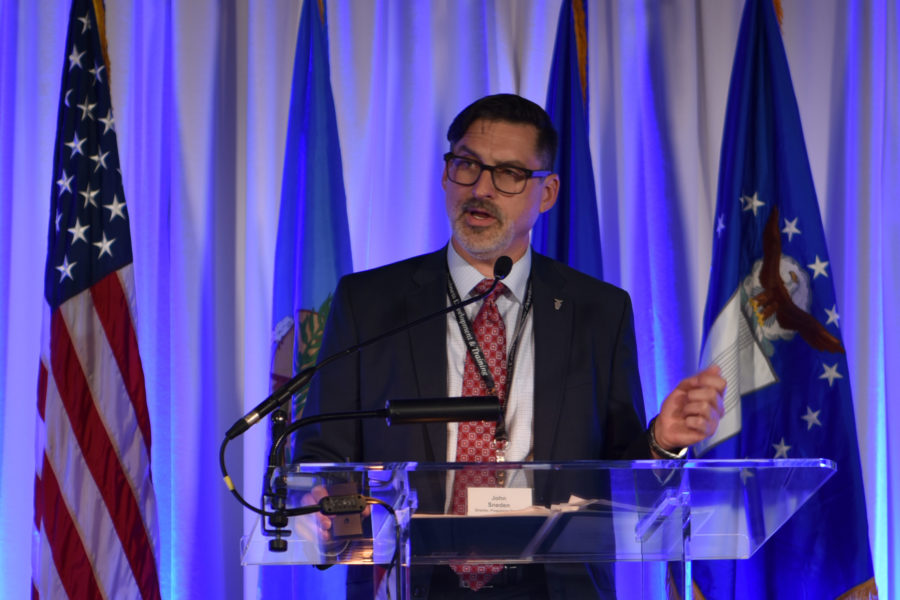 DAYTON, Ohio—Reduced competition, over-reliance on legacy systems, and falling funding are all contributing to a “critical inflection point” in propulsion for the Pentagon and industry members—and things are headed in the wrong direction, the director of the Air Force Life Cycle Management Center’s propulsion directorate warned.

Speaking with reporters at the Life Cycle Industry Days conference, John Sneden said there is a significant gap between how the U.S. propulsion enterprise is viewed publicly and how it is actually performing at the moment.

“I think there is a perception, and I think there’s a reality dynamic that’s out there. And we’re usually pretty keen on talking about the dichotomy between the two,” Sneden said. “The perception, I think, that’s out there is that we’re maintaining, if not advancing, our military advantage in propulsion. And that’s always been because we’ve always had the world’s greatest advantage in propulsion. But the reality is that our lead is starting to—we’re essentially stagnating, and we’re starting to lose our lead.”

Part of the problem, Sneden claimed, is a relative lack of propulsion projects being pushed by the Air Force. The Adaptive Engine Transition Program, aimed at developing next-generation propulsion technologies, launched in 2016, but other science and technology programs have yet to follow.

“We’ve had no large combat engine science and technology program in our labs since 2018. AETP was the last big program that came out of that,” Sneden said.

From an operational perspective, “we haven’t done a new fighter engine, transitioned it to the field, since essentially the F135 in the early 2000s timeframe,” Sneden said.

For more than a decade, Congress, the Pentagon, and industry members had considered the idea of an alternate engine for the F-35 fleet, with proponents saying it was necessary to increase competition and drive down costs.

That idea never came to fruition, however. And with no other major fighter engine programs transitioning to production since, “from an industrial base perspective, you start to get some atrophying of it, if you don’t continue to push the marketplace forward to drive those outcomes,” Sneden said.

Instead, the Air Force has turned to legacy engines to power new programs such as the F-15EX and T-7A—the F-15EX will use the the F110-GE-129, while the T-7 will have the F404-103. And while industry officials have promised that these new engines will provide upgraded performance, “inserting brand new technology into our legacy propulsion systems … means that you’re not … really exercising that advanced propulsion side with the industrial base,” Sneden said.

That issue could become even more urgent in the near future, as the Air Force, the F-35 Joint Program Office, and the Office of the Secretary of Defense consider the future of F-35 propulsion. The fighter has endured engine issues that have kept jets grounded and sent sustainment costs soaring.

There’s a consensus that something must be done, but Pratt & Whitney, which makes the F135, is pushing for what it calls the F135 Enhanced Engine Package, an update of the existing system, while GE Aviation is advocating for its AETP engine, the XA-100.

Should leaders decide to stick with the F135, Sneden warned that the future of AETP would be murky at best. Beyond that, only one other advanced propulsion program is in the works, the Next Generation Adaptive Propulsion program, and Sneden said the Air Force, constrained by a lack of resources, will have to commit to a vendor for that program by late 2024.

“If we end up with one vendor there and we don’t move forward with AETP, that vendor could actually get us into a place where we have essentially a reduced advanced propulsion industrial base,” Sneden said. “So we are concerned about it.”

Lack of competition isn’t the only concern. Sneden also pointed to declining funds for the propulsion directorate’s Component Improvement Program, which is focused on safety and reliability. In 2021, the initiative got $121 million in the Air Force’s budget. The Future Years Defense Plan submitted with the 2023 budget included just $34 million combined from 2024 to 2026, before ticking back up to $90 million in 2027.

Less funding will only exacerbate other issues, Sneden said.

“If you really want to win in the battle against China, who is catching up to us, who is spending the dollars, putting the emphasis … to obtain parity with the U.S., you have to invest in propulsion to be able to move yourself forward,” Sneden said. “So the message here really is a simple one. If we want to hold on to our propulsion advantage, we have to invest. We have to move our propulsion technologies forward. And we have to get them in the hands of the warfighter. Otherwise, China will have parity with us and eventually will exceed where we’re at.”