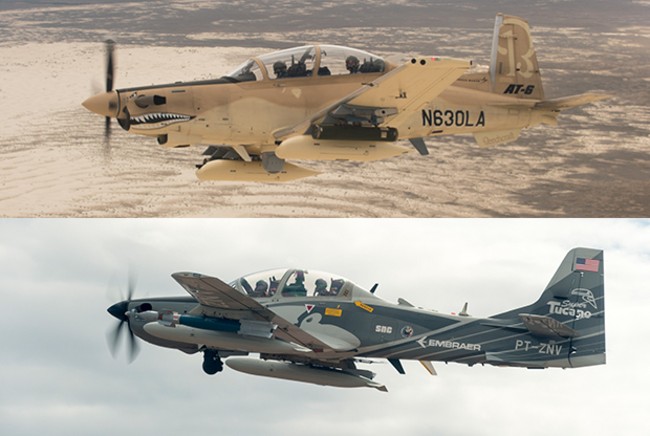 DAYTON, OHIO—Just over two years ago, the Air Force announced it was buying limited quantities of Textron’s AT-6s and Sierra Nevada Corp.’s A-29s. Now, the service is seemingly set to get rid of the aircraft, most likely in the form of a foreign military sale.

Should such a sale occur, it would mark the end of a prolonged back-and-forth. At the moment, Air Force Special Operations Command and Air Combat Command operate three A-29s and two AT-6s, respectively.

“Right now those will end up being probably declared excess defense articles, and we’ll look for other mission partners that may want to pick those up,” Edward Stanhouse, deputy program executive officer for intelligence, surveillance, reconnaissance, and special operations forces, told reporters at the Life Cycle Industry Days conference.

Both aircraft were initially proposed as part of the Air Force’s Light Attack/Armed Reconnaissance (LAAR) program that started in 2009. The program eventually fell prey to budget cuts but was revived in 2017 as the Light Attack Experiment program.

The A-29 and AT-6 were both re-entered into the competition and named finalists. In 2020, the Air Force announced it was buying two each of the airframes, followed by the purchase of a third A-29 a few months later.

The AT-6 was used for additional light-attack experiments with the Marine Corps and partner countries, while the A-29 was used as part of Air Force Special Operations Command’s foreign advisory mission. All told, the five planes cost more than $200 million.

Those limited purchases, however, fell short of the large-scale procurement program that some wanted, and the Armed Overwatch program, launched by U.S. Special Operations Command, was tasked with identifying a similar light attack/ISR platform. SOCOM selected both the AT-6 and A-29 among the five finalists for the program, but eventually chose the AT-802U Sky Warden.

The last of the three A-29s ordered by the Air Force was delivered in March, while the AT-6s were delivered in 2021. Now, Stanhouse said, they’ll likely be declared “excess defense articles,” a Defense Security Cooperation Agency term for equipment or platforms that are “in excess of the Approved Force Acquisition Objective and Approved Force Retention Stock of all Department of Defense Components.”

As excess defense articles, the aircraft could then be transferred to a foreign government, through either the approval of Congress or the usual Foreign Military Sale process.

“I think the probability is potentially FMS, because we currently have FMS partners who are flying both the AT-6 and A-29. So I think there’s quite a bit of foreign interest,” Stanhouse said.

Indeed, Brazil, Chile, Colombia, Ecuador, Nigeria, Indonesia, and the Philippines, among others, all have A-29s in their fleets. Thailand has also ordered the AT-6.