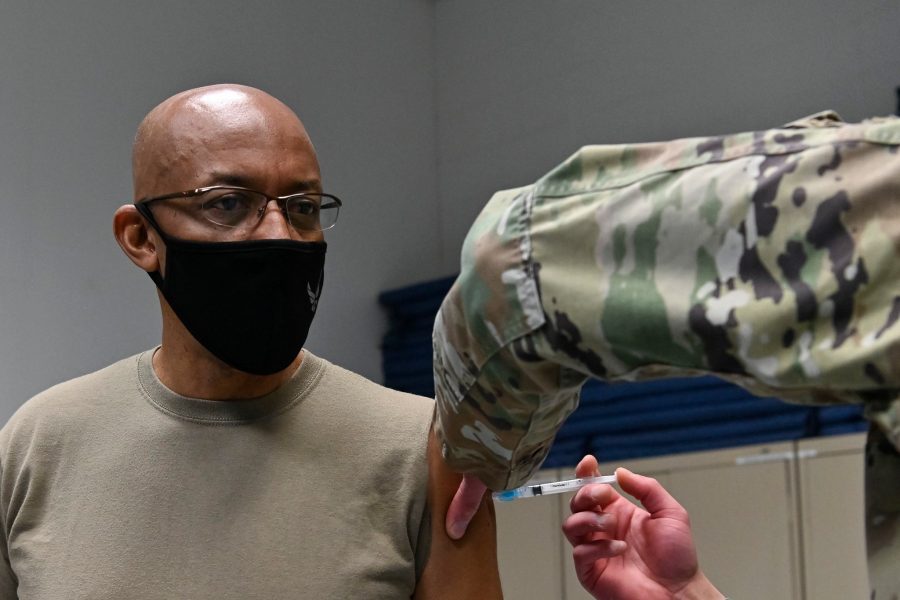 The top three leaders in the Department of the Air Force have received their first coronavirus vaccinations, as the shot rolls out across U.S. military bases worldwide.

Chief Master Sergeant of the Air Force JoAnne S. Bass is also vaccinated, according to a Jan. 12 Facebook post. “Didn’t even feel it,” she said.

The department declined to answer whether other senior officials, like the Air Force and Space Force’s vice chiefs or the Space Force’s top enlisted leader, have been vaccinated as well. “We don’t plan to release medical data on individuals beyond those leaders,” Stefanek said of Barrett, Brown, and Raymond. She didn’t say whether they have gotten both of the two-dose vaccines.

The Food and Drug Administration so far has approved two emergency vaccines developed by a Pfizer-BioNTech team and Moderna to fight COVID-19.

Airmen and Guardians began getting their two-part shots on Dec. 15. More than 139,400 Pentagon employees had received their first vaccines as of a Jan. 12 review of the Centers for Disease Control and Prevention’s tracking website. More than 376,000 vaccines have been distributed across the Department of Defense, in a pool separate from the supply available to the general public.

DOD is prioritizing its health care workforce, emergency services personnel, and public safety workers as the first vaccine recipients. That first phase “may include military, civilian, contractors, students, and other hospital non-clinical staff authorized to receive [the] vaccine from the DOD supporting patient care with a high risk of exposure or potential to interface with COVID-19 positive case,” according to the Pentagon’s phasing plan.

They are followed by people preparing to deploy overseas, high-risk populations, those involved in “critical national capabilities,” and other essential workers. Healthy employees will be the last to become eligible as vaccinations settle into a normal rhythm resembling that of annual flu shot distribution.

Air Force and Space Force installations around the world have cheered the arrival of COVID-19 vaccines in the past month. Military members are encouraged but not required to get the shots, which were vetted in months-long medical trials that included service members.

“I’m not getting vaccinated only for my own benefit,” said Col. Ryan Mihata, 86th Medical Group commander at Ramstein Air Base in Germany. “This is a way to help protect my daughter, my wife, my wingmen, and most importantly, our patients in high-risk categories.”

“I did have reservations,” added Airman 1st Class Douglas Moore, a medical worker at Vandenberg Air Force Base, Calif. “After reading the Pfizer study and doing a little research, I decided that the benefits outweigh any risks.”

Senior military officials dealt with multiple coronavirus incidents throughout 2020. Space Force Vice Chief of Space Operations Gen. David D. Thompson tested positive for the virus in late October, shortly after Raymond and Brown ended their own time in isolation after a COVID-19 scare among the Joint Chiefs of Staff left them potentially exposed to the virus.

Thompson returned to work at the Pentagon Nov. 9.