Skip to content
A KC-46 sits on the flightline at Joint Base Andrews, Md., on Feb. 23, 2021. Three KC-46s flew to Andrews to provide demonstration flights to Chief of Staff of the Air Force Gen. Charles Q. Brown Jr. and congressional leaders. Staff photo by Brian W. Everstine.
Expand Photo 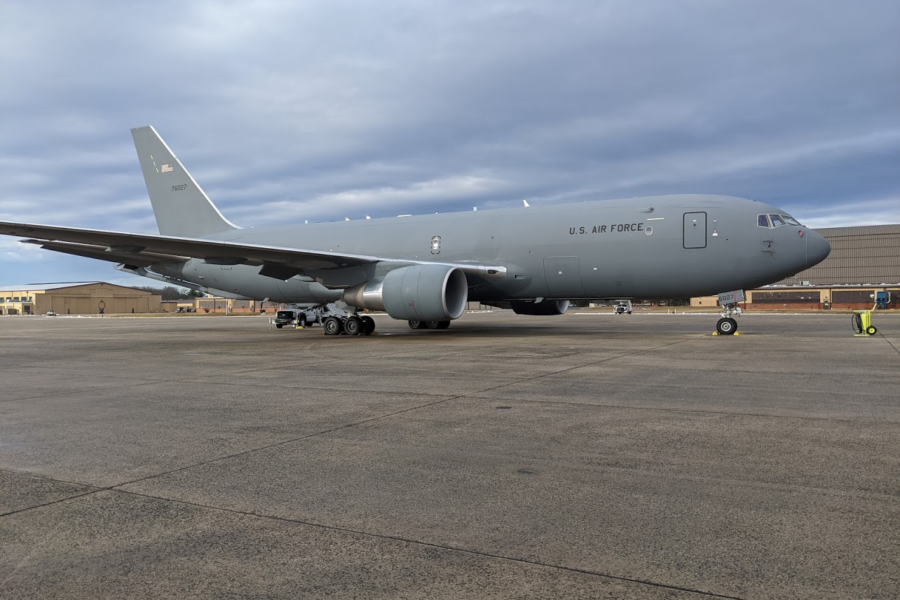 The Air Force’s next generation tanker is starting to go operational, but in a very limited way, with the goal of freeing up older planes for combat missions.

Air Mobility Command announced Feb. 24 it is phasing the KC-46 into operations, by making it available to U.S. Transportation Command for taskings that would otherwise be filled by KC-135s and KC-10s, based on what the Pegasus has been cleared to do. For example, this could be U.S.-based refueling of certain aircraft and possible overseas “coronet” missions to deploy fighters that use its centerline drogue system, such as F/A-18s.

AMC boss Gen. Jacqueline D. Van Ovost said during the Air Force Association’s virtual Aerospace Warfare Symposium that the goal is to relieve stress on the other tankers, which have been in high demand for overseas combat deployments and to support exercises and training at home.

“We will now commit the KC-46 to execute missions similar to the ones they’ve been conducting over the past few years in the Operational Test and Evaluation plan, but can now include operational taskings from U.S. Transportation Command,” Van Ovost told reporters. “For example, today the KC-46 may provide aerial refueling for F-16s participating in a U.S.-based training exercise. Under this new approach, if AMC is tasked to provide AR support for an operational coronet mission to move F-18s overseas or an operational B-52 mission, the KC-46 is on the table, which frees up KC-135s and KC-10s to execute other combatant command deployments that the KC-46A is presently unable to support with its existing deficiencies.”

There are strict limitations to the plan. For example, KC-46s will not go overseas for combat deployments. This is because AMC will not give a combatant commander an air frame that has limitations, said Brig. Gen. Ryan Samuelson, the KC-46 cross functional team lead. Instead, the goal is to free up more KC-135s and KC-10s for these deployments while also giving them more dwell time back home.

The decision to start operationalizing KC-46s came no more than 75 days ago, and is based on a few factors, Samuelson said. First, the Air Force and Boeing have made progress on the plan to fix the aircraft’s most serious and vexing problem, the aircraft’s remote vision system. The system of cameras and screens has been problematic for years, causing issues such as the receiving boom scraping receiving aircraft, and boom operators seeing warped or washed out images. The Air Force and Boeing agreed on a way ahead on this, with new systems expected to be delivered beginning in 2023.

Secondly, USAF crews have become more “seasoned” and confident in the jet.

“Our confidence level is gaining that we actually have operational capacity out there and we can provide for the joint force,” Samuelson said.

To demonstrate this, the Air Force sent three KC-46s to Joint Base Andrews, Md., earlier this week to show Chief of Staff Gen. Charles Q. Brown Jr. and a Congressional delegation the plan and refuelings with the aircraft. During flights on Feb. 22 and 23, the KC-46s refueled F-15s, F-16s, and each other to show their capability, Van Ovost said. These flights showed the key leaders that the jet is capable, but also revealed first-hand the issues with the existing RVS system that still hold it back.

The Air Force has been using the KC-46 for some limited activities outside training and test. For example, when there is a mission the KC-46 could handle that is tasked to a KC-135 or KC-10 unit, the command reaches out to a Pegasus wing to see if they are up for it. Under the new plan, AMC’s 618th Air Operations Center would receive a tasking from TRANSCOM and, if the KC-46 has already tested and proven its capability for the mission, it would be selected, Samuelson said.

The Air Force has so far received 44 KC-46s, at a pace of about two per month. The service has allotted some to training and test, and AMC is still crafting its plan for how many tankers would be available. The goal is for the taskings to begin this year, Samuelson said. It will be a “conditions-based” approach, and could open up to more receivers as the KC-46 proves itself. For now, however, it will be limited to certain receiving aircraft. For example, jets with low-observable coatings such as the B-2, F-22, and F-35 would not be open for the missions because of continued issues with the RVS system, Samuelson said.

“We want to build a plan that had high confidence,” Samuelson said. “We were not interested in building something that went off of some artificial number that stumbled when you realized other parts of the system are not ready to support this. We want a plan that TRANSCOM and the Air Force can count on, that it’s going to give you that scale in perpetuity, not that it’s an episodic start, stop, type.”