Skip to content
A C-130 Hercules aircraft lands at Camp Taji, Iraq, Aug. 22, 2019. The base was recently transferred to the Iraqi Security Forces Aug. 23, 2020, as Combined Joint Task Force-Operation Inherent Resolve continued the long-range plans of the Coalition and Government of Iraq to defeat the remnants of Daesh. (Courtesy photo)
Expand Photo 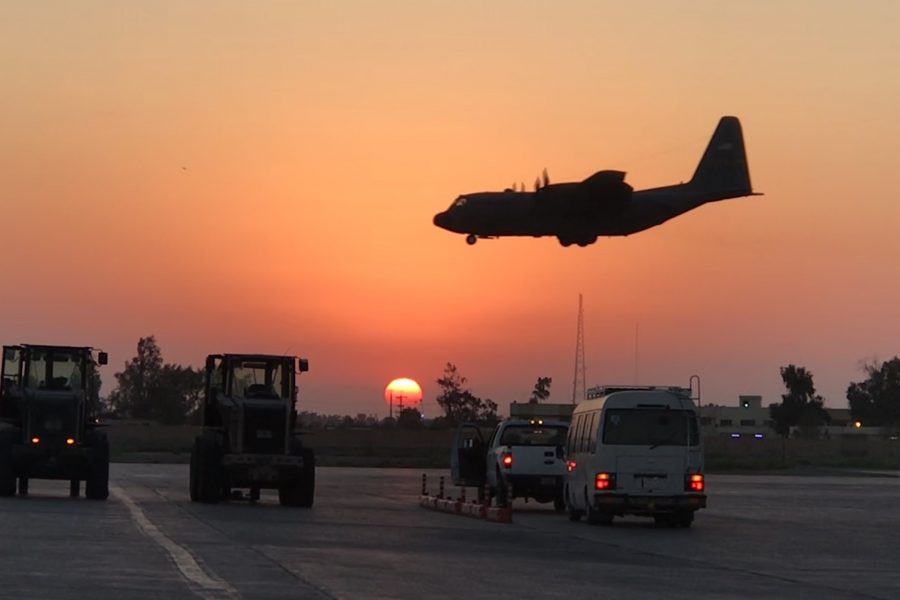 A C-130H crew landed too quickly, causing the aircraft to oscillate and then overrun the runway before crashing into a concrete barrier in June at Camp Taji, Iraq, destroying the Hercules, according to an Air Force investigation.

The C-130H, tail number 94-6706, assigned to the 165th Airlift Wing of the Georgia Air National Guard and flown by a crew from the Wyoming Air National Guard’s 153rd Airlift Wing, was flying a theater airlift sortie from Ali Al Salem, Kuwait, when the mishap occurred on June 8. All 26 aircrew and passengers survived, with four sustaining non-life-threatening injuries. The aircraft was a total loss valued at $35.9 million.

The C-130, callsign CROME60, took off without incident from Ali Al Salem and began its descent 59 minutes later into Camp Taji at about 10 p.m. local time for a night-vision landing, according to an Air Force Accident Investigation Board report released Nov. 18. During the descent, the aircrew turned earlier than its planned turn point and did not descend to the lower altitude as described in its flight plan.

GPS data showed that when the C-130 crossed the runway threshold at the base, it was flying 151 knots, with the recommended landing speed for a C-130 at its loaded weight being 105 knots.

Because of the excessive speed, and the fact the C-130 was at a nose-down attitude, the aircraft generated lift causing it to oscillate or “porpoise” down the runway—an up and down movement similar to how the sea mammal swims. By the time the aircraft’s engines engaged reverse thrust and allowed it to settle onto wheels so its brakes could engage, there was only about 1,000 feet of runway left. It overran the runway, and ultimately slammed into the concrete barrier 600 feet beyond the end of the tarmac.

In the impact, all propellers, still in reverse, and the front of their reduction gear boxes came off their engines. Two external fuel tanks hit the barrier, and debris from aircraft parts scattered across the aircraft and the ground around it. All 26 aircrew and passengers were able to escape through paratroop doors.

The report states the primary cause of the mishap was the excessive speed above the landing velocity, which caused the oscillation during landing. Additionally, the aircrew failed to adequately assess risk, follow proper procedures, and had poor communication throughout the incident, the report states.

Editor’s note: This story was updated at 9:47 p.m. on Nov. 19 to correct the affiliation of the unit flying the aircraft.