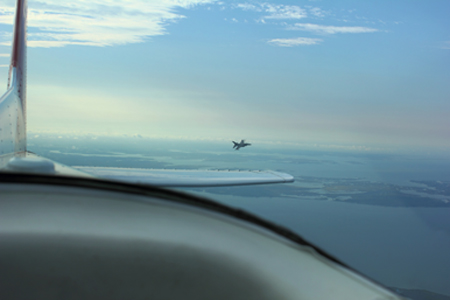 An F-16 of the District of Columbia Air National Guard's 121st Fighter Squadron maneuvers to intercept a Civil Air Patrol Cessna 172 during air defense exercise Fertile Keynote near Patuxent, Md., Aug. 28, 2012. F-16s on alert at JB Andrews, Md., home of the squadron, have scrambled more than 3,700 times for potential air threats to Washington, D.C., since 9/11, according to Air Guard officials. Training against CAP aircraft simulates the "low and slow" aircraft that most commonly stray into the restricted airspace of the nation's capital.