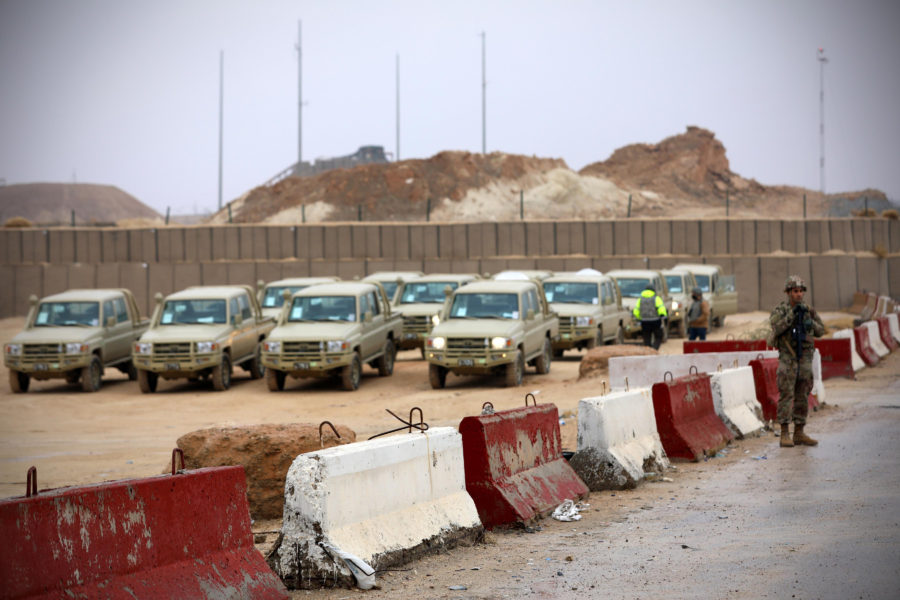 About 10 rockets attacked Al-Asad Air Base, Iraq, on the morning of March 3, just over a year after Iranian ballistic missiles ravaged base infrastructure and left more than a hundred U.S. troops with traumatic brain injuries, the Pentagon confirmed.

An American contractor suffered “a cardiac episode while sheltering” and died. All U.S. troops at the base are accounted for, and there are no other reports of injuries at this time, the Defense Department wrote in a statement following the incident.

“We extend our deepest condolences to the loved ones of the individual who died,” DOD wrote.

“Preliminary indications are that approximately 10 rockets were fired from points of origin east of the base,” DOD wrote.

Counter-Rocket, Artillery, Mortar (C-RAM) systems at the Iraqi base “engaged in defense of” American forces, but Kirby said the Pentagon can’t yet quantify how effective the C-RAM engagement was.

The Pentagon said it doesn’t yet have a full idea of the damage caused by the attack, and can’t yet say who perpetuated it. Iraqi security forces are playing point on the investigation, Marotto wrote, though the Pentagon is on deck “as needed” to back them up.

“I won’t speak for the Iraqis—I don’t know how long this investigation is gonna take them to complete,” Kirby said. “We’re gonna respect that process and let them do their work.”

However, he didn’t rule out the possibility of a U.S. military response.

“Again, I’m not going to speculate and get ahead of decisions that might or might not be made in terms of our response except to say that we will, if it is deemed that a response is necessary, and warranted, we’ll do that in our own way and in our own manner and, obviously, we’ll be mindful of the need to do that in a way that is as effective as possible,” he said.

Defense Secretary Lloyd J. Austin III’s team has briefed him on the situation, which he is watching closely, according to a DOD statement.

Congress is pushing back on Biden’s decision to order the strikes without its permission. Senators Tim Kaine (D-Va.) and Todd Young (R-Ind.) proposed legislation that, if approved, would revoke the Authorizations for the Use of Military Force that greenlighted the Gulf War and Iraq War, according to a March 3 release from Kaine’s office.

“Last week’s airstrikes in Syria show that the Executive Branch, regardless of party, will continue to stretch its war powers,” Kaine said in the release. “Congress has a responsibility to not only vote to authorize new military action, but to repeal old authorizations that are no longer necessary. The 1991 and 2002 AUMFs that underpinned the war against Iraq need to be taken off the books to prevent their future misuse. They serve no operational purpose, keep us on permanent war footing, and undermine the sovereignty of Iraq, a close partner. I call on Congress to promptly take up this measure, and for the Biden administration to support it, to finally show the American people that the Article I and II branches can work together on these issues.”

Kirby said the Pentagon believes the Feb. 25 strikes were “measured and proportionate,” and were intended to prevent Iranian-backed fighters from being able to use buildings that fighters used to transport weapons into Iraq and to deter future attacks on U.S. personnel in the region.

“Nobody wants to see the situation escalate,” Kirby told reporters.

While he said both the U.S. Constitution and the United Nations Charter support the legality of the Feb. 25 strikes, the Pentagon is open to dialoguing on the AUMF front.

“Legal justification clearly existed under Article 2 of the Constitution, the President’s role as Commander in Chief, and Article 51 of the UN Charter, which allows for nations for self-defense,” Kirby said. “And as the Congress debates and discusses the authorization to use military force, they’ll find a willing partner in that discussion here at the Defense Department,” Kirby said.

The Defense Department Office of Inspector General recently called off its own investigation into U.S. Central Command’s ability to safeguard its key assets from missiles and drones in the wake of last year’s attack at Al-Asad due to COVID-19 travel restrictions, Air Force Magazine previously reported.

Editor’s Note: This story was updated on March 3 at 5:33 p.m. EST to include new information from Pentagon Press Secretary John F. Kirby.