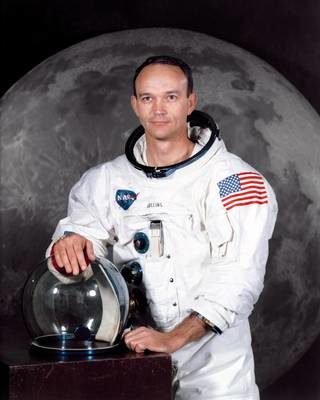 Retired Air Force Maj. Gen. Michael Collins, an astronaut who flew on the Apollo 11 first lunar landing mission, flew a Gemini mission, and was an aircraft test pilot, the first director of the Smithsonian’s National Air and Space Museum, an aerospace corporate officer, and an author, died April 28 at age 90.

Collins orbited above in the Columbia command module in July 1969 while Neil Armstrong and Buzz Aldrin landed on the moon in the Eagle lunar module. He was responsible for maneuvering the mothership to the moon, flying it alone to recover his crewmates when they ascended, and piloting it back to Earth.

In his autobiography, Carrying the Fire, Collins wrote that he felt “powerfully” how truly alone he was while orbiting around the far side of the moon, the first person to do this solo.

“I am it,” Collins wrote. “If a count were taken, the score would be three billion plus two over on the other side of the moon, and one plus God only knows what on this side.” But he did not feel loneliness; rather, “awareness, anticipation, satisfaction, confidence, almost exultation. I like the feeling.” His one “secret terror” of the mission was that somehow his crewmates would not return with him and he would be a “marked man” for failing them.

Collins was born in Rome, Italy, on Halloween, 1930, the son of Army officer James L. Collins, who was assigned there as a military attache, and who would later become a major general. After an “Army brat” life, young Collins attended the U.S. Military Academy at West Point, New York, and upon graduation in 1952, chose the Air Force. He did so both because of the lure of flight and to avoid accusations of nepotism, as his father, uncle, and older brother were already senior Army officials.

Collins won his wings in 1953 and was selected to fly the then-new F-86 fighter, performing squadron duties in California and France. After an aircraft maintenance course, Collins was part of a flying training roadshow that allowed him to accumulate more than 1,500 hours of fighter time, the minimum needed to apply to the test pilot school, to which he was accepted in 1960. During his test flying time, he flew the F-104, T-33, B-52, and B-57.

John Glenn’s 1962 orbital flight inspired Collins to apply for astronaut training, but he was not selected for the second group. Instead, he attended a new test pilot course in spaceflight, which gave him an opportunity to fly up to 90,000 feet in an F-104. He returned to fighter duties in 1963 but after a second application was accepted to astronaut duty late that year in the third group, which numbered 14 pilots.

Collins was appointed to develop a specialty in pressure suits and extravehicular activities. He was assigned to the two-man Gemini 10 mission and was the first person to perform two spacewalks on the same flight. The three-day mission was commanded by astronaut John Young and also involved multiple dockings with the Agena target vehicle.

After Gemini 10, Collins was picked for the backup crew for Apollo 8, then the prime crew, then the Apollo 9 crew, but a herniated cervical disc took him out of crew rotation for these flights. After recovery from surgery, he was chosen for Apollo 11.

Collins designed the patch for the mission, depicting an Eagle descending to the moon bearing an olive branch. It was the only American space mission patch not to feature the names of the astronauts, as Collins felt the crew was representing the nation and the world.

Even before Apollo 11, Collins was slated to command Apollo 17 and walk on the moon, but he declined because of the strain astronaut duties imposed on his family. If Apollo 11 was a success, Collins decided it would be his last space flight.

With the moon landing achieved, Collins, Armstrong, and Aldrin made a 38-day, 22-nation goodwill tour. Afterward, Collins served in the State Department as Assistant Secretary of State for Public Affairs. The job did not suit him, and he was appointed by President Richard Nixon to head the Smithsonian’s National Air and Space Museum, which was an excellent fit. Collins lobbied Congress for funds to build the downtown museum to replace a series of shacks and parking lots that held America’s growing collection of space artifacts.

Collins oversaw construction of the museum and hiring of museum staff and presided over the creation of its exhibits while at the same time completing a Harvard Business School program in management. He beat the July 4, 1976, deadline for the NASM’s opening—the U.S. bicentennial—by three days, and the facility quickly became, and remains, the most-visited museum in the world. The Columbia was placed in the museum’s “Milestones of Flight Gallery.”

Collins stayed with the museum until 1978, when he ascended to be undersecretary of the larger Smithsonian. He left the Smithsonian in 1980 to accept a position as vice president of LTV Aerospace.

During his post-NASA years, he remained in the Air Force Reserve, attaining the rank of major general. He retired from the service in 1982.

Collins wrote Carrying the Fire: an Astronaut’s Journeys, which was published in 1974; Liftoff: The Story of America’s Adventure in Space, a history of the U.S. space program published in 1988; and Mission to Mars, a nonfiction book about future human spaceflight, published in 1990.

Collins was also a watercolor artist who initially did not sign his paintings, fearing they would be valued for his signature.

Among Collins’ numerous awards and honors, he received the Presidential Medal of Freedom from President Nixon; the Collier Trophy, along with Armstrong and Aldrin;  the Harmon Trophy; and the Gen. Thomas D. White USAF Space Trophy.

He was a fellow of the Society of Experimental Test Pilots—from which he received the Iven C. Kincheloe award—a trustee and trustee emeritus of the National Geographic Society; and was elected to the International Space Hall of Fame, Aviation Hall of Fame, U.S. Astronaut Hall of Fame, and the Aerospace Walk of Honor in Lancaster, Calif. A lunar crater is named for him as is Asteroid 6471 Collins, and he is honored on the Hollywood Walk of Fame for contributions to the television industry.

Collins has been depicted in numerous fictional and nonfiction films about Apollo and was the subject of a Jethro Tull song, “For Michael Collins, Jeffrey and Me.”

Aldrin, now the sole living member of the Apollo 11 crew, issued a statement reading, “Dear Mike, wherever you have been or will be, you always have the Fire to Carry us deftly to new heights and to the future. We will miss you. May you rest in peace.”

The Collins family released a statement saying, in part, “We … know how lucky Mike felt to have lived the life he did … Please join us in fondly and joyfully remembering his sharp wit, his quiet sense of purpose, and his wise perspective; gained both from looking back at Earth from the vantage point of space and gazing across the calm waters from the deck of his fishing boat.”