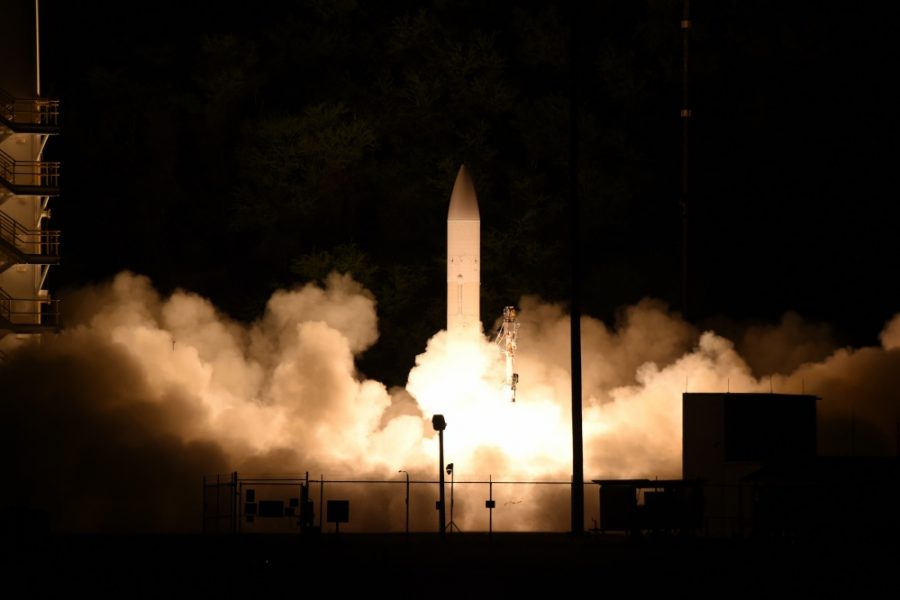 A joint Army/Navy test of a Common Hypersonic Glide Body demonstrated that the vehicle will work as expected, and the way is now clear for hypersonic weapon development in each service, the Pentagon reported March 20.

The test was conducted from the Pacific Missile Range Facility, Kauai, Hawaii, and the “jointly executed launch” occurred at 10:30 p.m. local time March 19, the Pentagon reported. The flight’s length, altitude, top speed, or intended aimpoint were not disclosed. Hypersonic vehicles are those that can fly in excess of Mach 5, or five times the speed of sound.

The Navy is the design lead on the C-HGB project, while the Army will lead production, and each service will devise its own variant missile tailored for ground or sea launch. The Air Force was to use a variant of the common glide body in its Hypersonic Conventional Strike Weapon, or HCSW, but it pulled out of the joint program last month and did not participate in the test, an Air Force spokeswoman said.

“This event is a major milestone toward the Department’s goal of fielding hypersonic warfighting capabilities in the early- to mid-2020s,” a Pentagon spokesman said in a statement.

The glide body was built by Dynetics Corp. under a $351 million Army contract from August 2019. The Army’s goal is to be operational with a Long Range Hypersonic Weapon (LRHW) in 2023. Lockheed Martin is to be the prototype system integrator, under a $347 million contract also let in August 2019. The vehicle design is based on work done by Sandia National Laboratories.

The test “builds on the success we had with Flight Experiment 1 in October 2017, in which our C-HGB achieved sustained hypersonic glide at our target distances,” said Vice Adm. Johnny Wolfe, director of the Navy’s Strategic Systems Programs, which is the lead designer for the C-HGB.

“In this test we put additional stresses on the system and it was able to handle them all,” Wolfe said, crediting the C-HGB team from “across government, industry and academia.” The test “validated our design and are now ready to move to the next phase towards fielding a hypersonic strike capability.”

The Missile Defense Agency took advantage of the test to monitor the flight and collect tracking data to inform its development of systems that will have to defend against adversary hypersonic weapons.

“This test was a critical step in rapidly delivering operational hypersonic capabilities to our warfighters in support of the National Defense Strategy,” said U.S. Army Lt. Gen. L. Neil Thurgood, director of Hypersonics, Directed Energy, Space, and Rapid Acquisition, whose office is leading the Army’s Long Range Hypersonic Weapon program and joint C-HGB production. The test was “consistent with how we can apply this capability in the future … We will continue to move aggressively to get prototypes to the field.”

When fielded, the C-HGB will comprise the weapon’s conventional warhead, guidance system, cabling, and thermal protection shield, the Pentagon said. Having common or similar elements for the land- and sea-launched variants “provide economies of scale for future production as we build the U.S. hypersonics industrial base,” the Pentagon spokesman said.

Hypersonics is a “transformational” capability, said Mike White, assistant director for hypersonics in the office of Defense Research and Engineering (Modernization).

“The glide body tested today is now ready for transition to Army and Navy weapon system development efforts and is one of several applications of hypersonic technology underway across the Department.  These capabilities help ensure that our warfighters will maintain the battlefield dominance necessary to deter, and if necessary, defeat any future adversary.”