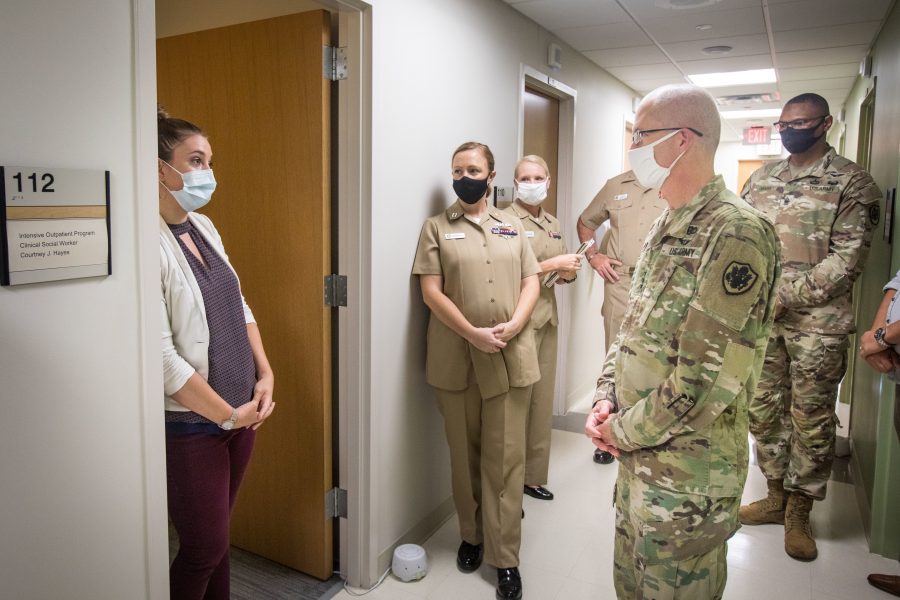 A top military health official on Oct. 8 defended the precautions taken by the Pentagon as two senior military officials tested positive for the coronavirus, saying Americans should heed the cautionary tale that anyone can contract the disease.

Most of the Joint Chiefs are quarantining at home to prevent the spread of COVID-19 after the vice commandant of the Coast Guard fell ill. The Marine Corps assistant commandant has contracted the coronavirus as well, though other top brass have not shown symptoms and continue to routinely test for the virus while sequestered.

Defense Health Agency boss Army Lt. Gen. Ronald J. Place told reporters during a discussion hosted by the Defense Writers Group that the Joint Chiefs are “very good” about keeping distance between themselves and others, covering their faces, washing hands and avoiding handshakes, and isolating if anyone in their orbit becomes sick.

“Absent almost total isolation, there’s not a great way for us to totally prevent spread,” Place said. “Despite all those best practices that we think that we know about how to try to contain this particular virus, it isn’t 100 percent effective. … Our senior leaders are following the rules and are role models for those rules.”

Americans need to remain vigilant despite frustration with social and business restrictions and emotional fatigue during the pandemic, he added.

The spate of sickness in America’s top military echelon has spurred concerns that the U.S. could be vulnerable to attack. Chairman of the Joint Chiefs of Staff Army Gen. Mark A. Milley and other Pentagon officials have refuted that idea.

“America is capable and ready to defend the homeland and support our allies and partners,” Milley said in an Oct. 8 release. “The Joint Chiefs and I remain in constant communication while in quarantine and the chain of command remains the same. There has been no impact on our ability to effectively plan, coordinate, and synchronize efforts to defend our nation.”

Place noted that the Pentagon has adjusted workplace protocols as the world learns more about the virus. Defense Department leadership shifted from teleworking almost exclusively in the early months to resuming in-person meetings over time, while taking additional precautions inside the building.

It’s possible that Coast Guard Vice Commandant Adm. Charles W. Ray was able to spread the coronavirus during an Oct. 2 meeting inside the high-level conference room known as “The Tank.” The DHA director said deciding to convene in person is just one of many risks DOD officials decide on each day.

“All of those senior leaders understand that there was some risk about being in the same room with each other or other people,” Place said. “But they evaluated the risk in such a way that it was worth the potential risk to make the mission, or whatever was happening inside that meeting room.”

This is the second coronavirus scare among the Joint Chiefs so far this year, as the pandemic continues to spread in the military ranks.

As of the morning of Oct. 7, DOD recorded more than 69,000 cases of COVID-19 across military and civilian employees and their dependents and defense contractors. More than 47,000 of those people have recovered, nearly 1,400 were hospitalized, and 98 died.

While no outbreaks in the military have surpassed the number of people sickened on the USS Theodore Roosevelt, where COVID-19 infected more than 1,200 sailors and killed one, the virus has spread in units that need to gather in person to remain mission-ready and at training bases.

DOD is now planning for the eventual rollout of a coronavirus vaccine for its troops, using its annual influenza immunization process as the blueprint. Getting a COVID-19 shot into the arms of service members poses different challenges than the tried-and-true flu shot, Place said.

For example, all vaccine manufacturers make the same version of the single-jab flu shot, but several companies are in the race to create an effective coronavirus vaccine. Some are developed as single doses, while others require two doses.

“We have to be able to figure out not just how we transport, how do we hold it, how we inject it, but how does it fit in the system with six different makers?” Place said. “If you get one, how do we make sure that the second dose that you get is from the same maker?”

DOD is participating in two Phase III vaccine trials, one with AstraZeneca and another that Place declined to name. The Pentagon may consider making the COVID-19 shot mandatory for service members if the vaccine is fully licensed by the Food and Drug Administration, though the calculus changes if it is authorized only for emergency use, he said.

The pandemic has forced DHA to rethink how it looks at the staff, bed space, and equipment needed to respond to an outbreak. It has also refined its model for projecting how infectious diseases will spread, which helps it plan for outpatient and inpatient care and the supplies that are required.

DHA is also considering new apps that can evaluate the effectiveness of various responses to an infectious disease outbreak, and assessing how the pandemic’s disruptions to normal military life could play out in the future.

“Musculoskeletal injuries from overuse or from non-use, because we weren’t doing PT for a while … and then get back into it—what happened from that?” Place said.