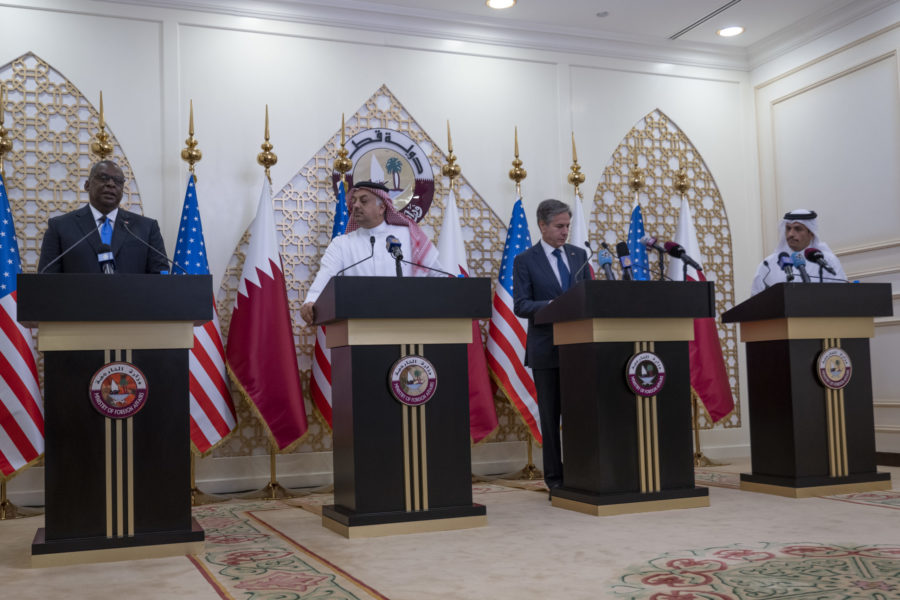 Defense Secretary Lloyd J. Austin III and Secretary of State Antony J. Blinken joined their counterparts in Qatar on Sept. 7 to acknowledge the transit and care of 58,000 evacuees from Afghanistan and to give a nod to the country’s strategic role in countering Iran as the American presence in the Mideast draws down.

In Pentagon remarks about the end of the Afghanistan War on Sept. 1, Austin said many countries helped the 124,000 evacuees, including Americans, endangered Afghans, and third-country citizens, to depart amid the danger and turmoil following the fall of Kabul, but he singled out Qatar for a visit.

Austin and Blinken both thanked the Gulf partner and described Qatar’s role in America’s desire for a continued over-the-horizon counterterrorism capability. Drone strikes in Afghanistan following the American withdrawal are believed to have originated from Al Udeid Air Base in Qatar.

“No operation is ever perfect,” Austin acknowledged, promising an after-action report about the precipitous drawdown and evacuation effort.

He confirmed a reporter’s question that ground intelligence operations had been withdrawn from Afghanistan, but that regional intelligence, surveillance, and reconnaissance, including that housed at Al Udeid, would be instrumental in America’s regional security efforts moving forward.

“There’s no question that it will be more difficult to identify and engage threats that emanate from the region, but we’re committed to making sure that threats are not allowed to develop and create significant challenges for us in the homeland,” he said. “We already have robust capabilities in the region … We’ve come a long way in the last 20 years in terms of the development of our capabilities.”

Austin added: “There isn’t a scrap of Earth that we can’t reach out and touch when we need to. We’ve demonstrated that time and time again.”

Austin thanked Qatar for serving 10,000 meals to evacuees three times per day during their transit through the country. Some 4,000 evacuees were still in the country when the two American cabinet members spoke.

Blinken said some 100 American citizens, mostly dual nationals, are believed to still be in Afghanistan and that the State Department is working to help them depart on charter flights, should they desire to leave. Several thousand Afghan special immigrant visa applicants are also believed to be in the country, although Blinken said an accurate tally had not been made.

Hamid Karzai International Airport remains closed to commercial flights, with charters and overland routes used to evacuate those now in danger. Blinken said Qatar and Turkey have been in touch with the Taliban to provide the assistance necessary to reopen the airport to commercial flights and that the Taliban is not blocking egress or holding hostages, contrary to reports.

Austin said he discussed a range of issues with Qatari officials, including malign behavior by Iran.

“Iran’s support for terrorism and its willingness to supply increasingly lethal weapons to non-state groups undermines the regional stability that we all seek,” he said. “We’re committed to working together to enhance regional defenses against destabilizing actions, including Iran’s nuclear aspirations.

Austin also acknowledged Qatar’s role as a regional mediator, citing several other areas where the two nations can work together.

“Our relationship goes deeper than just defense concerns,” he said. “We’re working with our regional partners toward some important shared objectives: to wind down conflicts, to provide humanitarian aid to civilians in need, to de-escalate tensions, and to encourage dialogue. We think that’s the right way to ensure regional security and stability, and we know that Qatar stands with us.”