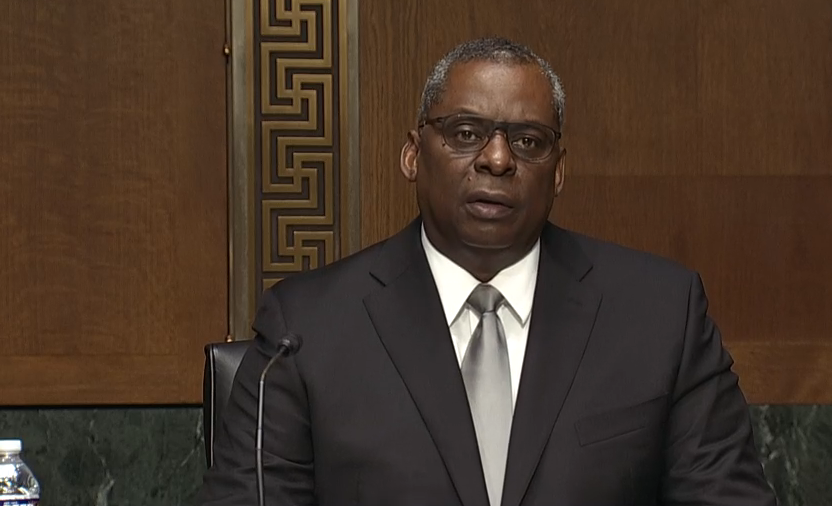 Lloyd Austin, President-elect Joe Biden’s pick to lead the Pentagon, spent his Senate confirmation hearing on Jan. 19 pressing his civilian bona fides to lawmakers, with some pledging opposition to the waiver Austin would need to become the nation’s first Black Defense Secretary.

Austin spent 40 years in the military before retiring in 2016 as a four-star general, which means he is still within the seven-year cooling off period required for former military officers to serve in the top Defense Department job, requiring a waiver from both the House and Senate for confirmation.

“If confirmed, I will carry out the mission of the Department of Defense, always with the goal to deter war and ensure our nation’s security,” Austin told the Senate Armed Services Committee. “And I would not be here asking for your support if I felt that I was unable or unwilling to question people with whom I once served, in operations I once led, or [if I was] too afraid to speak my mind to you or the President. I was a general and a Soldier, and I’m proud of that. But today I appear before you as a citizen, the son of a postal worker and a homemaker from Thomasville, Ga., and I’m proud of that too.”

In early 2017, the committee approved a waiver for retired Gen. James N. Mattis to lead the Pentagon, but some of the lawmakers who supported say they do not support granting a second waiver for Austin.

Sen. Tom Cotton (R-Ark.) said his vote to support a waiver for Mattis was a mistake, and he would not do so for Austin because approving two in four years sets a precedent that the exception will become the rule. Additionally, it would create the idea that getting four stars isn’t a capstone for a military officer, but “if they play their cards right, they too can become a Secretary.”

Opposition is bipartisan, with Sens. Richard Blumenthal (D-Conn.) and Tammy Duckworth (D-Ill.) also saying they are against the waiver. All three senators are military veterans.

The bulk of the lawmakers in the hearing, however, expressed support for Austin’s nomination. Sen. Dan Sullivan (R-Alaska) introduced “Mr. Austin” at the hearing, saying he “represents the best of America, [and is] a man of integrity, humility, and character with a wealth of relevant experience.” Former Defense Secretary Leon Panetta also praised Austin, saying “there is no doubt in my mind that he will uphold the principle of civilian control.”

Austin said, if confirmed, he will appoint other senior leaders who “have the right experiences and are not afraid to provide input.” He pointed to the nomination of Kathleen H. Hicks to be the first female deputy secretary of defense and Colin Kahl to be the under secretary of defense for policy. He also pledged to avoid the recent trend of having multiple senior leaders serving in acting roles.

“I think it’s imperative that the OSD staff maintain primacy in terms of crafting strategy and policy, and I think that we’ll need the right civilians in key positions to help us do that,” he said.

In a wide-ranging hearing, Austin faced several questions on Pentagon acquisition, nuclear policy, personnel issues, the problem of extremism in the ranks, and the COVID-19 pandemic.

Austin said the Pentagon’s 2018 National Defense Strategy is largely “on track,” but if confirmed he would want to review the strategy and update it. He also said there would likely be a new Nuclear Posture Review, noting he is “personally” supportive of the nuclear triad and does not support removing one leg, as has been suggested by several lawmakers and experts. In extended questioning by Sen. Deb Fischer (R-Neb.) on how he would change nuclear modernization, Austin avoided specifics, saying he looks forward to “getting under the hood” and going over specifics of nuclear modernization.

Several lawmakers pressed Austin on personnel issues, especially sexual assault. Austin would not commit to changes to the Uniform Code of Military Justice related to the crimes, or moving sexual assault cases out of the military chain of command, but expressed anger about the lack of progress within the Defense Department to address the scourge of sexual assault, which he said is a leadership and a readiness issue. “I take the issue of sexual assault seriously and personally.”

To that end, Austin also said he supports Biden’s plan to overturn the Trump administration’s ban on transgender individuals serving in the military.

When asked about the pandemic, Austin called it the greatest threat to the U.S., saying he will look at ways to scale and speed up DOD support. “It’s killed over 400,000 of our American citizens. That’s just an incredible loss of life.”

The more than three-hour hearing was light on specifics related to the Air Force. In response to questioning from Sen. Jeanne Shaheen (D-N.H.) related to delays in the KC-46 program and problems with the aircraft’s remote vision system, Austin said he would “stay on this issue.”

“I think it’s critical,” he said of the KC-46. “It’s a critical component of our overall force.”

In response to questions from Sen. Kevin Cramer (R-N.D.) on prospective cuts to legacy programs, especially MQ-9 Reapers in U.S. Central Command, Austin said he wants to look at requirements and the global force posture to ensure that combatant commands, especially U.S. Indo-Pacific Command, have what they need. That said, there will be a lingering need for legacy ISR aircraft in the Middle East and “the Air Force has a strong voice in this, in what they can afford to keep on in light of the investments they are making in modernization.”

Austin, who served as a member of the board of directors for Raytheon Technologies, pledged to recuse himself from decisions related to that company for four years—four times the one year requirement. He also told Sen. Elizabeth Warren (D-Mass.) that he has no plans to become a lobbyist after serving in the Pentagon.

A committee vote on the waiver for Austin has not been set. The House Armed Services Committee on Jan. 19 canceled its planned hearing on the topic, with leaders in the committee such as chairman Rep. Adam Smith (D-Wash.) urging approval. In the meantime, Under Secretary of Defense David Norquist will lead the Biden Pentagon in an acting role.