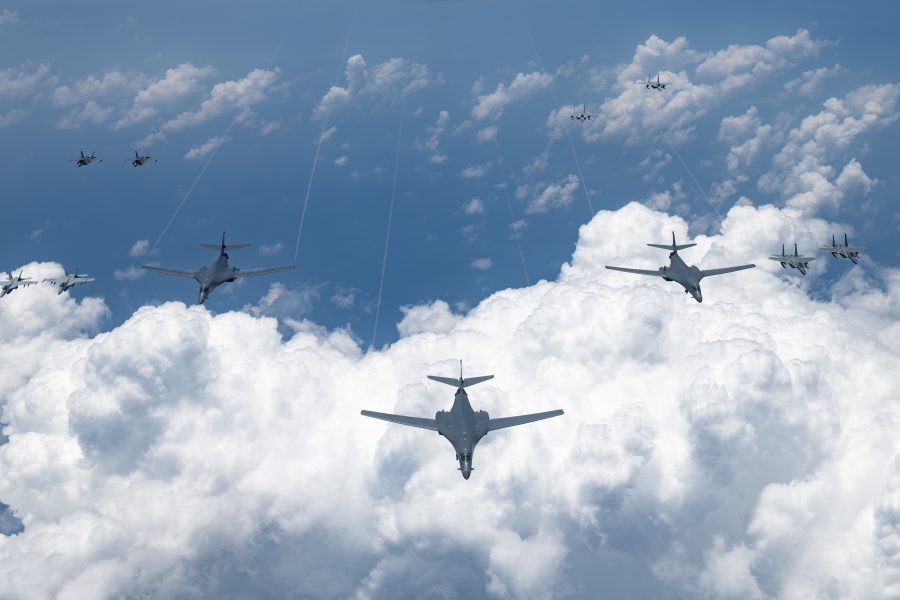 B-1, B-2 Bomber Task Forces Simultaneously Operate in the Indo-Pacific

Two of the Air Force’s three bombers flew simultaneous long-range missions across the Indo-Pacific on Aug. 17, with two different sets of B-1s training alongside Japanese fighters and Navy ships, while stealth B-2s flew their own training mission in the Indian Ocean.

Two bomber task forces are deployed to U.S. Indo-Pacific Command, with B-1s at Andersen Air Force Base, Guam, and B-2s at Navy Support Facility Diego Garcia. On Aug. 17, two B-1s took off from Ellsworth Air Force Base, S.D., and flew to the East Sea, where they linked up with two B-1s from Andersen and four F-15Cs from Kadena Air Base, Japan, as well as Japan Air Self-Defense Force F-15Js, Marine Corps F-35Bs from Marine Corps Air Station Iwakuni, Japan, and the USS Ronald Reagan Carrier Strike Group for a large force exercise, according to a Pacific Air Forces release.

“Our unique strength as an Air Force is our ability to generate integrated actions with our joint teammates and allies and partners to challenge competitors in a time and place of our choosing,” PACAF boss Gen. Kenneth S. Wilsbach said in the release. “These simultaneous airpower missions demonstrated our capacity and readiness to deliver a wide range of proactive, scalable options to quickly deploy our forces to support our mission of ensuring a free and open Indo-Pacific theater.”

At Diego Garcia, two B-2s deployed to the Indian Ocean base from Whiteman Air Force Base, Mo., flew “joint interoperability tactics training” and returned to the base, according to PACAF. The simultaneous bomber task force deployments is the largest USAF bomber presence in the Indo-Pacific since the service ended the 16-year-old continuous bomber presence mission at Andersen in April and shifted toward a “dynamic force employment” model in the region.