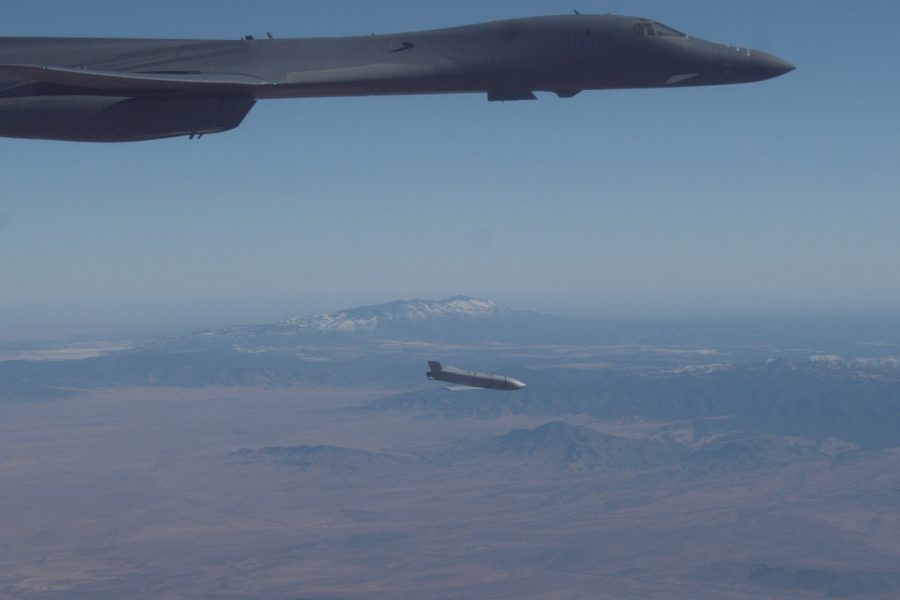 A B-1B bomber dropped an inert AGM-158 missile from an external pylon on Dec. 4, marking the first time the bomber has demonstrated such a capability. The test paves the way for the B-1 to carry many such weapons on external hardpoints, potentially expanding its capacity and ability to launch new munitions like hypersonic missiles.

The test was carried out by a B-1B with the 412th Test Wing at Edwards Air Force Base, Calif., and the pylon used is usually occupied by a Sniper targeting pod. The B-1B was designed for external carriage of weapons, but this capability was deleted under the START arms control agreements with Russia. The last B-1 had its external hardpoints disabled in 2011.

“Planned implementation, if any, of the B-1’s expanded carriage demonstration would … not alter plans for the 17 Lancers already requested for retirement,” according to a press statement from Edwards.

The pylon in question was modified with different connectors and its internal wiring was replaced with harnesses that would support its new role. The modification required reassigning “one of the internal weapon stations to the external location,” special instrumentation flight chief N. Keith Maynard of the 812th Airborne Instrumentation Test Squadron said.

The test concludes a series of expanded carriage demonstrations begun in 2019 with an internal bomb bay modification. The external-release capability was tested on the ground in October, and a captive-carry test was conducted in November.

The Air Force’s Seek Eagle office modeled the separation characteristics, and concluded that the JASSM would fall and open its wings in a manner similar to how it performs when released from a B-52H’s left pylon, the Edwards release said. The captive carry test verified that the B-1 was passing information correctly to the missile, as well as that it would pitch nose-down after release.

The aircraft previously tested the Long-Range Anti-Ship Missile, or LRASM, which is a variant of JASSM intended to find and destroy maritime targets.