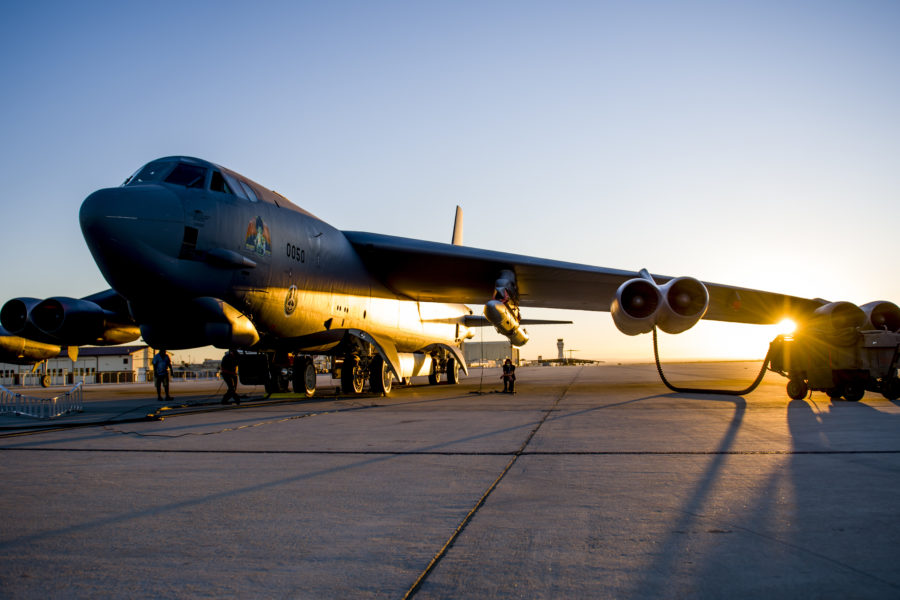 A B-52H bomber demonstrated the steps necessary to fire a hypersonic AGM-183 missile at a target 600 nautical miles away during the ongoing Northern Edge exercise in Alaska, the Air Force reported.

The bomber, on a 13-hour flight from Barksdale Air Force Base, Louisiana, received targeting data from the All-Domain Operations Capability experiment being run as part of the exercise, which in turn was being supplied with targeting data by sensors the USAF did not identify. The B-52 crew then simulated feeding the targeting data to an AGM-183 Air-launched Rapid Response missile. The service said the bomber was not actually carrying an AGM-183. It did not characterize the type of target being attacked.

“We were really exercising the data links that we needed in order to complete that kill chain loop,” 53rd Test Management Group Deputy Commander Lt. Col. Joe Little said. Feedback was then provided “to the players in the airspace that the simulated hypersonic missile was fired and effective,” he said. The event was a demonstration of beyond-line-of-sight kill chain employment, the Air Force said, and it succeeded in the “highly contested and realistic threat environment that Northern Edge provides.”

The ADOC experiment is meant to demonstrate synchronizing joint functions in forward locations “when traditional [command and control] … is degraded or denied,” the service explained. ADOC personnel help facilitate joint long-range fires through an “Advanced Battle Management System approach.” The experiments are designed to accelerate the employment of tactics, techniques, and procedures as well as technologies that can support a major combat operation.

Northern Edge is a high-end wargame taking place in and around Alaska training ranges. It’s experimenting and exercising with multi-domain operations while providing tactical training for individual land, sea, air, and space units. The exercise is trying out “adaptive basing” joint tactics, training, and procedures with live, virtual, and constructive means in support of Indo-Pacific Command.

The exercise also marks the operational debut of the F-15EX, the two brand-new examples of which flew to Alaska from Eglin Air Force Base, Florida, for the wargame last week. They and other F-15s in the wargame are trying out the Eagle Passive Active Warning Survivability System (EPAWSS) electronic warfare suite.

The Air Force has not yet succeeded in launching an ARRW. The missile was not released in a flight test planned for last month. The service said further attempts will be made soon.