Skip to content
Airmen participate in a group physical training session at Eglin Air Force Base, Florida. The Air Force Materiel Command will offer diagnostic fitness assessments to Airmen starting Jan. 20. The assessments aim to provide Airmen with an idea of their current fitness level and where they may need to improve prior to their test due date. This is part of an overall effort to continue to encourage a culture of fitness that includes year-round physical conditioning and healthy eating habits. Air Force Photo by Samuel King, Jr.
Expand Photo 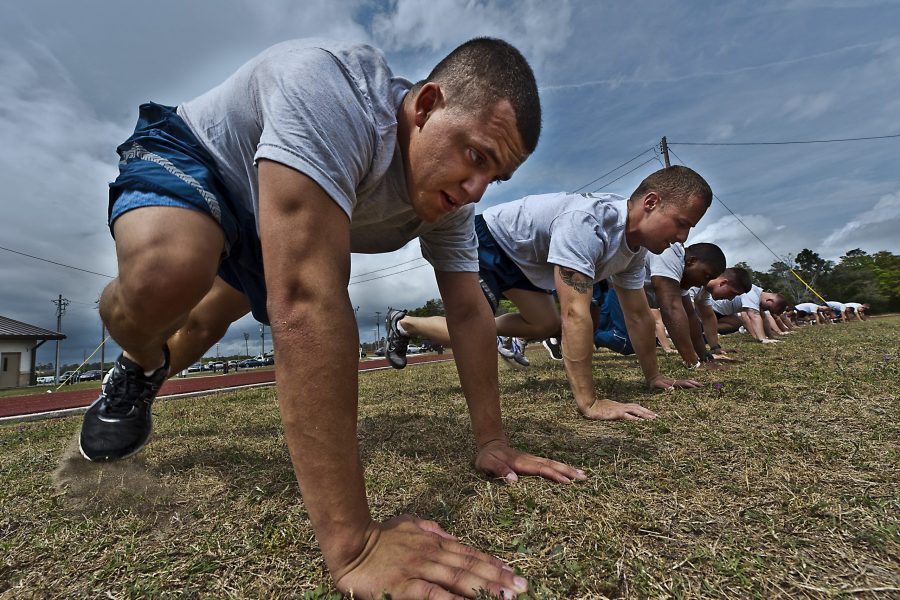 The Air Force plans to implement diagnostic fitness testing across the force as early as February, with at least one command rolling out a beta version of the no-fail trial tests on Jan. 20.

“Physical fitness is crucial to our ability to meet mission requirements,” Air Force Materiel Command boss Gen. Arnold Bunch said in a USAF release. “The diagnostic assessments will give airmen an idea of their current fitness level and where they may need to improve prior to their test due date. This is part of an overall effort to continue to encourage a culture of fitness among all of our airmen that includes year-round physical conditioning and healthy eating habits.”

The Air Force considers three components when assessing the overall health of an airman: body composition, which is primarily evaluated through waist measurements, and aerobic and muscular fitness. The aerobic portion of the test is comprised of a 1.5-mile run that must be completed in a certain time determined by age and gender, while muscular fitness is tested by doing as many pushups and sit-ups as possible in one minute each.

Airmen must receive a composite score greater than 90 for an excellent score, while meeting the minimum requirements in all three categories. A satisfactory rating is a composite score of 75 to 89.99 with all minimums met, according to the Air Force Instruction.

Currently, airmen are tested once or twice a year, depending on their fitness scores. Those who receive an excellent score only take the test once a year, while airmen who pass the test but fall short of the excellent rating are required to take the test every six months, said TSgt. Hung Thai, a physical training leader and the noncommissioned officer in charge of Air Force A1 executive services.

Failing the test completely could negatively impact an airman’s career, and it might even lead to an administrative separation from the service if the airman fails too many times.

“One of the things we noticed is that regardless of fitness level, you can get anxiety,” Larry Anderson, chief of Air Force physical fitness policy, told Air Force Magazine. The diagnostic tests are intended to help ease some of those pressures because an airmen can decide when they want to take a PT test. If they are having a good day, the test will count. If they decide half way through, they aren’t feeling it that day, they can stop and it won’t count against them, Anderson added.

Under AFMC’s beta program, airmen can take up to three “mock tests” as long as they are current on their fitness assessments. The diagnostic tests can be taken as far out as 45 days before their official assessment month up to 15 days before their PT test is due. Airmen also can take a mock test for just one component or all three, but the score will only be counted if the entire test is completed during the mock assessment.

“Once an assessment is recorded, the airman may not take another diagnostic test until 45 days prior to the start of their next testing cycle,” according to AFMC.

Chief Master Sergeant of the Air Force Kaleth Wright first floated the idea of what he called a “bad day” policy for the PT test in August, saying there would be “no harm, no foul, no discipline” for not meeting the standards. Instead, airmen would have 45 days to “get yourself together” and retake the test.

A month later at AFA’s Air, Space & Cyber Conference, Wright also said the service was considering spacing out the waist measurement portion of the test from the aerobic and strength components. However, Anderson said the service has since “shelved” that idea, fearing airmen would go to extreme measures to lose weight and put their health at risk.

“We reached out to our major commands and got feedback. It was scattered all over the place, but we saw the writing on the wall and put it to the side,” Anderson said. “They are all tied together. The further out you separate the body circumference from the physical portion, how much are you accurately capturing someone’s health and fitness? … We know there are other bigger topics to tackle and we wanted to put our full efforts into other things.”