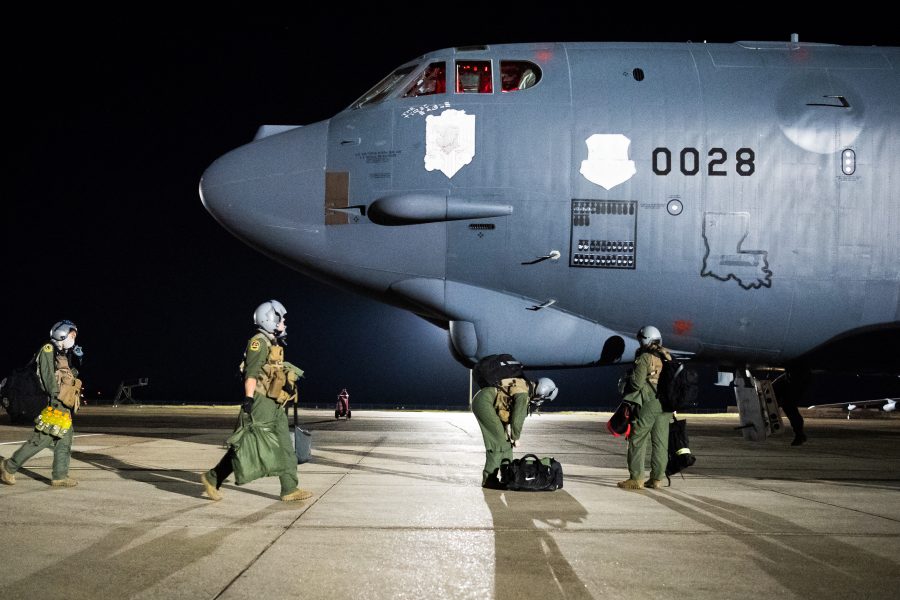 Two B-52H Stratofortresses from the 96th Bomb Squadron at Barksdale Air Force Base, La., left the installation on the evening of Oct. 13, flew nonstop to Europe to train with NATO over the North Sea, and returned the next night, 2nd Bomb Wing spokesperson Capt. Christopher Sullivan told Air Force Magazine.

The “crossover exercise” aimed to help USAF more effectively work together with its NATO partners, the 2nd Bomb Wing wrote.

The transatlantic trip was part of a larger defensive exercise slated to span two weeks, involving more than 50 multinational aircraft, and ensuring interoperability between different air forces from across the alliance, according to a U.S. Air Forces in Europe-Air Forces Africa release.

“Bomber crews coordinated with air- and ground-based participants demonstrating allied capability to bring distributed forces together within NATO’s operational area,” the release stated, adding that the B-52s were supporting a preexisting Bomber Task Force on the continent.


B-roll from the exercise shows Airmen preparing an aircraft for the transatlantic voyage and one of the Stratofortresses taking off from Barksdale Air Force Base, La., on Oct. 13, 2020. Video: Senior Airman Bria Hughes/2nd Bomb Wing

On their way there and back, the BUFFs received fuel from USAF, as well as the Dutch, German, and Italian air forces, according to the release.

“This multilateral support to the BTF is an example of the strength gained through interoperability and partnership with NATO allies and partners,” it stated.

Eight other BUFFs took part in an elephant walk on Oct. 14 back at the wing’s home base in the Bayou State, officials told Air Force Magazine.

The readiness exercise aimed to ensure the wing’s ability “to provide the nation with winning combat power,” it wrote in an Oct. 16 Facebook post.

“Our job is to provide winning combat power to the nation through conventional and nuclear global strike,” Sullivan said in a statement to Air Force Magazine. “These readiness exercises allow us to practice that capability in a realistic way that makes sense. No matter where or when, our bombers can get there quickly and in force.”