Skip to content
A B-52H bomber takes off from Barksdale Air Force Base, La. on Aug. 26, 2020, ahead of Hurricane Laura, which is expected to bring high winds and possible water damage to the base on Aug. 27, 2020. The destination of the bombers was not disclosed for reasons of operational security. USAF photo.
Expand Photo 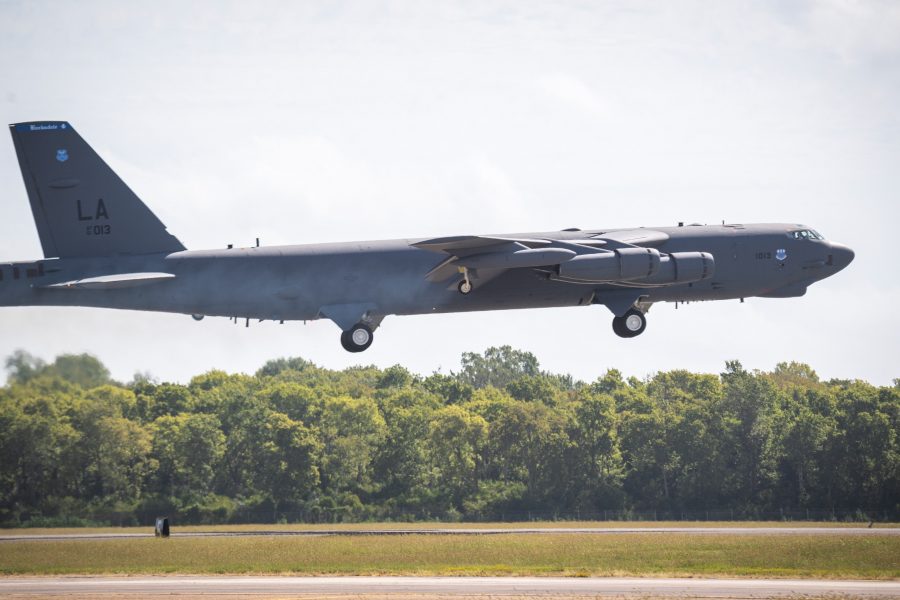 As Hurricane Laura strengthens to a Category 4 storm, Eighth Air Force is moving most of its 47 or so B-52 bombers at Barksdale Air Force Base, La., to other locations and putting base personnel at HURCON 2, the second-highest storm readiness level, rather than evacuating personnel, a 2nd Bomb Wing spokesman said.

Barksdale, which hosts 8th Air Force, Global Strike Command, and about half the Air Force’s B-52H force, is located in northwest Louisiana, almost directly in the path of Laura, which is predicted to skirt the Louisiana/Texas border after making landfall the night of Aug. 26. The National Hurricane Center predicted Laura will still be at about Category 1 strength, with winds up to 95 miles per hour, when it reaches the vicinity of Shreveport and Bossier City, where Barksdale is located, the morning of Aug. 27.

“I need the Airmen of Team Barksdale to take this seriously,” 2nd Bomb Wing Commander Col. Mark C. Dmytryszyn said in a message to base personnel. “Ensure you have adequate supplies and are prepared to weather this storm.”

Ellington Field Joint Reserve Base, near Houston, Texas, is expected to take a heavy but not direct hit from Laura. It has moved its MQ-9 Reapers and F-16s—which normally sit alert at the facility—into hangars to ride out the storm, a spokesman said. The base, which hosts Reserve units from all services and the Coast Guard, also “stands ready” to serve as a forward air relief and logistics site after the storm, “as we did after Hurricane Harry and Ike,” an Air Force Reserve spokesman said.

Global Strike Command does not confirm or deny the presence of nuclear weapons at any base, but Barksdale’s B-52Hs have a nuclear mission with the AGM-86B Air-Launched Cruise Missile. The spokesman declined to comment on the configuration of the bombers as they depart the base, and would not say where they were headed until they arrived, citing operational security.

In the runup to the arrival of now-Tropical Depression Marco and Hurricane Laura, the base remained at Hurricane Condition 4, but the base commander upgraded that to a HURCON 2, on a scale where the lower number indicates greater danger, as Laura gained strength. At HURCON 2, destructive winds are expected within 24 hours, and base personnel are expected to have secured outdoor objects, prepared their homes with protective measures and emergency supplies, and prepared go-kits for short-notice evacuation, although the plan remains for personnel to “shelter in place,” the spokesman said.

Low-lying areas on base are being protected with sandbags, the spokesman said, though he was not immediately able to say what measures would be taken to protect aircraft down for maintenance and unable to fly.

In 2005, Barksdale suffered moderate structural damage and downed trees as a result of Hurricane Rita, but Laura is expected to arrive with stronger force.

Laura is expected to push a storm surge of more than 20 feet along the western Louisiana coast, and surge as much as 30 miles inland in some places, according to the National Weather Service.