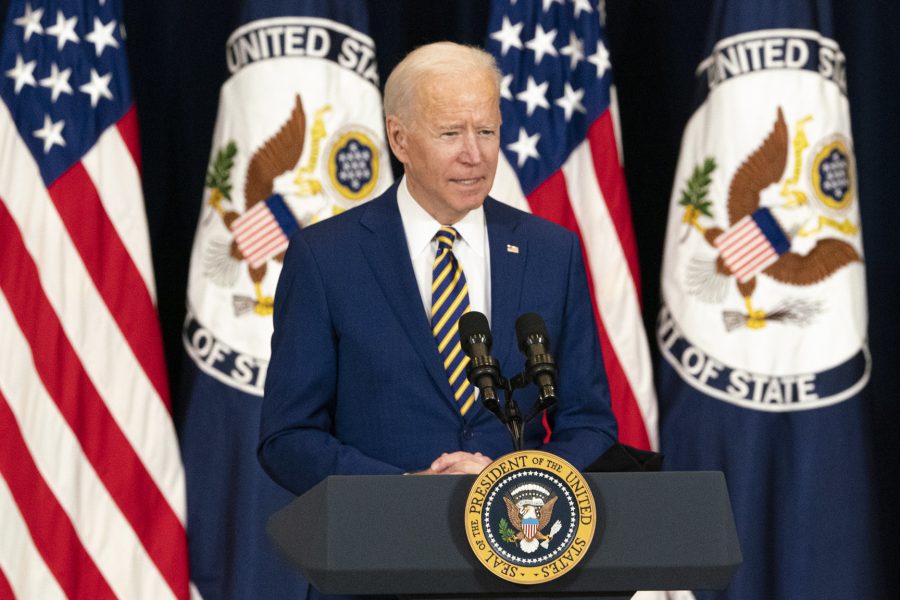 The U.S. will push back on Russian aggression, compete with China economically and militarily, and renew its alliances, promoting democracy and “re-earning” American moral authority, President Joe Biden said in his first major foreign policy speech Feb. 4, delivered at the State Department.

Biden also said he’s ending support for the Saudi Arabian-led war in Yemen, and curtailing “offensive” arms sales to that country. However, the U.S. will continue to sell Riyadh defensive weapons. Biden also officially halted any U.S. troop movements away from Germany.

“America is back,” Biden said, and will put diplomacy “back at the center stage of our foreign policy.” The U.S. will again champion “freedom, …opportunity, upholding universal rights, respecting the rule of law, and treating every person with dignity.”

Biden said he’s put Russian President Vladimir Putin on notice “in a manner very different from my predecessor, that the days of the United States rolling over in the face of Russia’s aggressive actions, interfering with our elections, cyber attacks, and poisoning its citizens are over.” He said the U.S. will “not hesitate to raise the cost on Russia,” and will do so in concert with American allies. However, he noted that the U.S. and Russia have agreed to extend the New START strategic arms treaty by five years, “to preserve the only remaining treaty between our two countries.” The U.S. will engage with adversaries “when it’s in our national interest,” he said.

China is “our most serious competitor,” Biden said, vowing to “confront [its] economy abuses, counter its aggressive courses of action,” and challenge its attacks on human rights, “intellectual property, and global governance.” The U.S. will compete with China “from a position of strength,” he said.

America “must meet a new moment of advancing authoritarianism, including the growing ambitions of China to rival the United States and the determination of Russia to damage and disrupt our democracy,” Biden asserted. But, “We are ready to work with Beijing when it’s in America’s interest to do so.”

Alliances are America’s “greatest asset,” Biden said, pledging to lead with diplomacy and reclaim “our credibility and moral authority, much of which has been lost” and “earn back our leadership position.”

Defense Secretary Lloyd J. Austin III will lead a “global posture review of our forces so our military footprint is appropriately aligned with our foreign policy and national security priorities,” Biden announced.  The review will be coordinated across “all elements of national security” and Austin will cooperate closely on the review with Secretary of State Antony J. Blinken.

“If we must fight, we must win. That requires a laser-focus on talent and training, innovation and leadership, forward presence, and readiness,” said Austin in a statement. “At the direction of the President, the department will therefore conduct a global force posture review of U.S. military footprint, resources, strategy, and missions. It will inform my advice to the Commander-in-Chief about how we best allocate military forces in pursuit of national interests.”

Amanda J. Dory, who is performing the duties of the under secretary of defense of policy, will perform the review, in “close consultation” with Chairman of the Joint Chiefs of Staff Gen. Mark A. Milley, Austin said.

Biden said he’s engaged with the leaders of “our closest friends” about “re-forming the habits of cooperation and rebuilding the muscle of democratic alliance that have atrophied over the past few years of neglect, and, I would argue, abuse.”

While the review is underway, “We’ll be stopping any planed troop withdrawal from Germany,” he said.

Biden said the U.S. will reinvigorate its diplomacy to end the war in Yemen, which he called a “humanitarian and strategic catastrophe.” The U.S. will provide humanitarian aid and “restore long dormant peace talks” regarding the conflict.

“This war has to end,” Biden insisted, and “to underscore our commitment” to that goal, the U.S. will end “all … support” for “offensive operations” including “relevant arms sales.”

At the same time, Saudi Arabia has legitimate security concerns, having come under “missile attacks, UAV strikes, and other threats” from “Iranian-supplied forces in multiple countries,” Biden said. The U.S. will, therefore, continue to support and “help Saudi Arabia defend its sovereignty, its territorial integrity, and its people.”

The Pentagon could not immediately comment on the level of aid it has provided to Saudi Arabia by way of aerial tanking and intelligence, surveillance, and reconnaissance support. Raytheon Technologies corporate officers said in late January they are taking some $519 million worth of “offensive munition” sales to a Middle East customer off its books. The change in administration signaled that the license will not be granted, they said. Raytheon had booked an order from Saudi Arabia for 7,500 Paveway smart bombs.

The new administration had already said, however, it will put a hold on the sale of 50 F-35 fighters to the United Arab Emirates pending a review of Middle East security.

Also on Feb. 4, Biden told members of the diplomatic corps his administration will re-elevate the importance of the State Department and diplomatic initiatives. “I’ve got your back,” he said. There will also be no doctrinaire conformity demanded of diplomats, he said.

“We want a rigorous debate that brings all perspectives and makes room for dissent. That’s how we’ll get the best possible policy outcomes.”

Biden decried the recent coup in Myanmar, and pledged a coalition of allies to pressure the Burmese military to restore democracy and the rule of law there. “The Burmese military should relinquish the power they have seized, release the advocates and activists and officials they had detained, lift the restrictions on telecommunications, and refrain from violence,” Biden said.

Referring to the coup—but also making an unsubtle reference to the Jan. 6 storming of the U.S. Capitol—Biden said, “In a democracy, force should never seek to overrule the will of the people or attempt to erase the outcome of a credible election.”

Addressing himself to the “America first” policies of the Trump administration, Biden said the U.S. “cannot afford to be absent any longer on the world stage.”