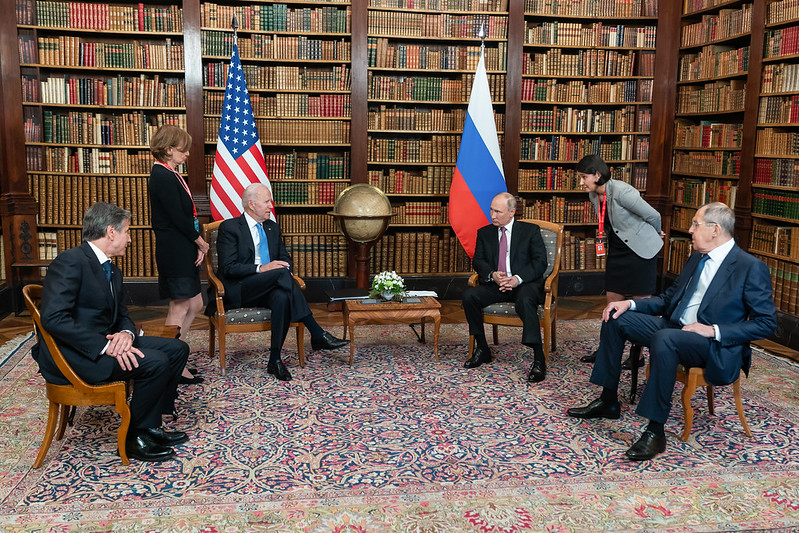 President Joe Biden said unequivocally Dec. 8 that no U.S. troops would be used to deter Russia from invading Ukraine, and administration and DOD officials said there are no plans for additional defense assistance after a final small arms delivery this week.

In the aftermath of a tense videoconference between Biden and Russian President Vladimir Putin Dec. 7, the White House has sought to de-escalate tensions with Russia and lend credence to a diplomatic solution to the crisis at the Ukrainian border, where Russia maintains more than 100,000 troops. In recent weeks, Russia has consolidated forces on multiple fronts to the north and east of Kyiv and wields a sizable Black Sea fleet to Ukraine’s south.

“That is not on the table,” Biden told reporters on the south lawn of the White House when asked if U.S. troops could be used in or around Ukraine to deter a Russian invasion. “The idea the United States is going to unilaterally use force to confront Russia from invading Ukraine is not in the cards right now.”

He said he told Putin, “We would probably also be required to reinforce our presence in NATO countries to reassure particularly those on the eastern front.” But for now, a diplomatic team will start working with Russia to address security concerns, Biden added.

His words. and the “if” condition, were echoed by national security advisor Jake Sullivan Dec. 8 in an interview with Defense One.

“What it means to be proactive is to set the table,” Sullivan said of preparing Ukraine for a defensive contingency. “We have gone above and beyond what any administration has done in terms of providing the kinds of defensive support to the Ukrainian military.”

Those articles include small munitions, such as machine guns and grenades, and medical assistance, not the new air and naval defenses the Ukrainian defense minister said during a visit to Washington in November were necessary to deter Russia.

Still, Sullivan said work has been done to deter Russia and shore up NATO’s eastern flank allies, some of whom formally were under direct control or influence of the Soviet Union.

“We have engaged in a substantial amount of effort, both in terms of the operations and exercises we’ve undertaken this year,” Sullivan said of U.S. operations in the NATO eastern flank countries, which include Poland, the Baltic nations, and Black Sea allies Romania and Bulgaria.

“From our perspective, we have allied unity, we are providing support to the Ukrainians, we have sent a clear message to the Russians, and we believe that this shows the kind of proactive, strong, clear, decisive policy that puts us in the best position to manage this crisis as we go forward,” Sullivan added.

“There are options to expand security assistance to assist in Ukraine’s self defense, but I don’t want to get ahead of the President’s decisions based on that,” Kahl said. “We’ve been in lockstep in terms of consultations with our allies sharing intelligence, we all see the same thing.”

Chairman of the Joint Chiefs Gen. Mark A. Milley held a call with NATO chiefs of defense earlier in the week and met personally with his Polish counterpart at the Pentagon Dec. 8. The meeting follows a call between Defense Secretary Lloyd J. Austin III and his Polish counterpart Nov. 30, which discussed how to enhance deterrence on the NATO border.

Nonetheless, Pentagon spokesman John F. Kirby said in a Dec. 8 Pentagon briefing that there were no plans for Austin to hold additional consultations with his NATO counterparts, and no new defense assistance to Ukraine to announce.

“If there is a further incursion and invasion into Ukraine, and if our NATO allies request additional capabilities to assist them with their own defensive needs or requirements, then we would positively look at those requests,” he said, referring to Sullivan’s remarks at the White House Dec. 7. “We’re just not there yet.”

Several administration officials qualified that if Russia were to “further invade” Ukraine, a response would be triggered.

Kirby clarified to Air Force Magazine that could mean Russia sending reinforcements into the breakaway republics of Donetsk and Luhansk in southeastern Ukraine. The sliver of Ukraine has been cut off from the rest of the country by a frontline and low-intensity conflict with Russian-backed separatists since the Minsk agreement was signed in 2014.

“It means additional incursions into Ukraine, violating their territorial integrity and their sovereignty with additional units inside Ukraine,” Kirby said.

As the crisis evolves, American Soldiers and special operators are currently on Ukrainian soil.

The Defense Department confirmed that approximately 150 trainers from the Florida National Guard’s 53rd Infantry Brigade Combat Team and an undisclosed number of U.S. special operations forces are working with the Ukrainian military.

The U.S. Air Force began basing MQ-9 Reapers at Romanian Air Force Base 71 at Campia Turzii earlier this year. U.S. Air Forces in Europe boss Gen. Jeffrey L. Harrigian said at the time, “The forward and ready positioning of our MQ-9s at this key strategic location reassures our allies and partners, while also sending a message to our adversaries that we can quickly respond to any emergent threat.” Theater security packages of USAF fighters rotate to the base regularly. USAF also has a detachment of contractor-owned and operated MQ-9s in Poland, as well as an aviation detachment in Poland, that supports rotations of USAF cargo and fighter jets to the country.

DOD declined to disclose timelines for additional training, operations, or deployments in the region.