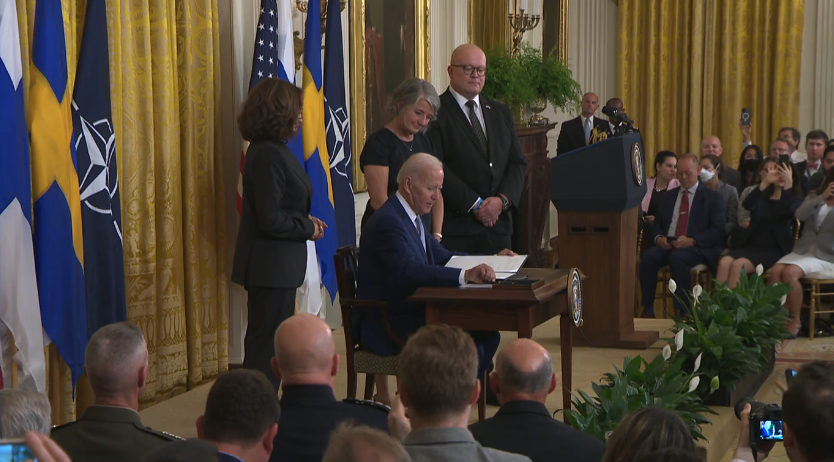 The mood was festive in the packed East Room of the White House on Aug. 9 as President Joe Biden signed the instruments of ratification for the entry of Finland and Sweden into NATO.

The two High North nations had up until months ago remained unaligned and fiercely independent, Biden said, until Russia’s aggression against Ukraine spurred public support for NATO entry.

“I think it’s a pretty big day,” Biden said with a wide smile as he welcomed the ambassadors of Finland and Sweden to the United States to his side to witness the signing.

The President’s signing came after the Senate voted 95-1 on Aug. 3 to approve a resolution ratifying the two countries’ entry into NATO.

Biden invited Swedish Prime Minister Magdalena Andersson and Finnish President Sauli Niinistö to visit the White House on May 19 to set the stage for an invitation by all 30 NATO countries at the Madrid NATO summit in June.

“Putin thought he could break us apart when this all started,” Biden said, referring to Russian President Vladimir Putin’s efforts to divide the alliance with hybrid warfare tactics including misinformation and cutting off vital gas access to parts of Europe.

Putin also warned that, should NATO assets be positioned in Finland and Sweden, he would respond in kind.

“He believed he could break us apart, in my view, weaken our resolve,” Biden said. “Instead, he’s getting exactly what he did not want. He wanted the Finland-ization of NATO. But he’s getting the NATO-ization of Finland, along with Sweden.”

The United States becomes the 23rd country to ratify Finland’s and Sweden’s entries into NATO. Remaining NATO partners required to finalize the process include the Czech Republic, Greece, Portugal, Slovakia, Spain, Russia-ally Hungary, and disruptor Turkey, which made demands to both ascending countries before allowing the process to continue.

Turkey sells arms to Ukraine, including the unmanned aerial system Bayraktar, which has proven vital to Ukraine’s efforts to destroy Russian tank columns and armored vehicles. Turkey purchased the S-400 missile system from Russia, resulting in its banishment from the F-35 program.

Before Turkey allowed Finland’s and Sweden’s invitations to proceed, Turkish President Recep Erdogan demanded that Finland and Sweden extradite alleged Kurdish terrorists to Turkey, and an agreement was signed between the three parties in Madrid on June 28 to explore the accusations.

None of the remaining hurdles or past contention were mentioned at the White House signing ceremony, only how the two new members would strengthen U.S. security.

“We’re going to be better able to meet the new challenges of a changed European security environment with two strong, reliable, highly capable new allies in the High North,” Biden said, noting how the U.S. and Allies have enhanced deterrence on NATO’s eastern flank.

Both Finland and Sweden participate in multilateral NATO exercises with longtime NATO member Norway, while all three Nordic countries have chosen to fly the F-35.

In a Senior Enlisted Leader International Summit outside Washington, D.C., this month, Sweden briefed 65 participating countries and NATO on how it conducts agile combat employment, or the use of remote bases, in the Arctic. A Finnish defense official similarly told Air Force Magazine that Finland works closely with the U.S. Air Force on developing the ACE concept for the Arctic.

Finland has a 900-mile border with Russia and brings much experience in the realm of defending against hybrid warfare and operating within Russia’s anti-access and area denial bubble.