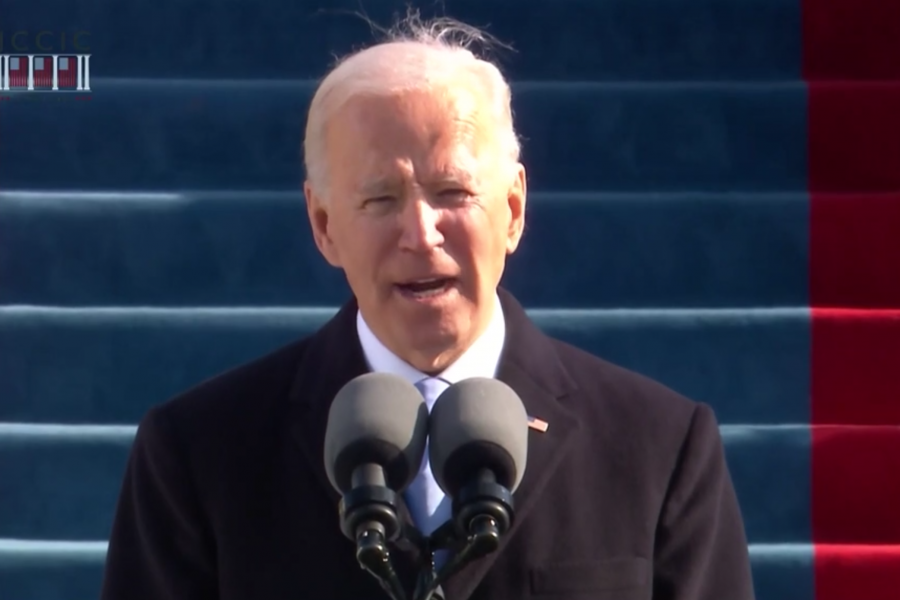 President Joe Biden took the oath of office to become the 46th Commander in Chief on Jan. 20, pledging to unite a country that faces deep internal division and to project strength abroad by repairing alliances.

“This is a great nation. We are good people,” Biden said in his inaugural address. “And over the centuries, through storm and strife, in peace and in war, we’ve come so far. But we still have far to go. We’ll press forward with speed and urgency, for we have much to do …, much to repair, much to restore, much to heal, much to build, and much to gain.”

Biden and Vice President Kamala Harris took their oaths at a Capitol building that two weeks ago was the site of a violent insurrection while Congress was certifying the election. In his speech, Biden sought to reach out to those who did not support him in the election, asking them to give him a chance so they can work together to overcome the nation’s deep divisions.

“Here we stand across the Potomac from Arlington Cemetery, where heroes who gave the last full measure of devotion rest in eternal peace,” Biden said. “And here we stand just days after a riotous mob thought they could use violence to silence the will of the people, to stop the work of our democracy, to drive us from this sacred ground. It did not happen. It will never happen. Not today, not tomorrow, not ever.”

Because of the violence at the Capitol, about 25,000 National Guard personnel were called up to help secure the surrounding area for the ceremony. The National Mall was blocked off and the crowd was much smaller than usual due to the enhanced security and restrictions related to the COVID-19 pandemic.

The continuing pandemic dominated Biden’s address, with the new President calling on the country to set aside politics and “finally face this pandemic as one nation.” Biden held a moment of silence for the more than 400,000 Americans who have died as a result of the pandemic.

“Folks, this is a time of testing,” Biden said. “We face an attack on our democracy and on truth, a raging virus, growing inequity, the sting of systemic racism, a climate in crisis, America’s role in the world. Any one of these will be enough to challenge us in profound ways.”

The speech, which lasted about 22 minutes, lightly touched on military and national security topics. Biden said the country under his administration will work to project strength through alliances, which have been under stress in recent years.

“Here’s my message to those beyond our borders: America has been tested, and we’ve come out stronger for it,” he said. “We will repair our alliances, and engage with the world once again, not to meet yesterday’s challenges, but today’s and tomorrow’s challenges, and will lead not merely by the example of our power, but by the power of our example.”

Following the ceremony, Biden participated in the ceremonial review of troops through military formations marching in front of the Capitol before heading across the Potomac River to lay a wreath at Arlington National Cemetery alongside former Presidents Barack Obama, George W. Bush, and Bill Clinton.

“With purpose and resolve, we turn to those tasks of our time, sustained by faith, driven by conviction, devoted to one another in the country we love with all our hearts,” Biden concluded. “May God bless America and may God protect our troops. Thank you, America.”