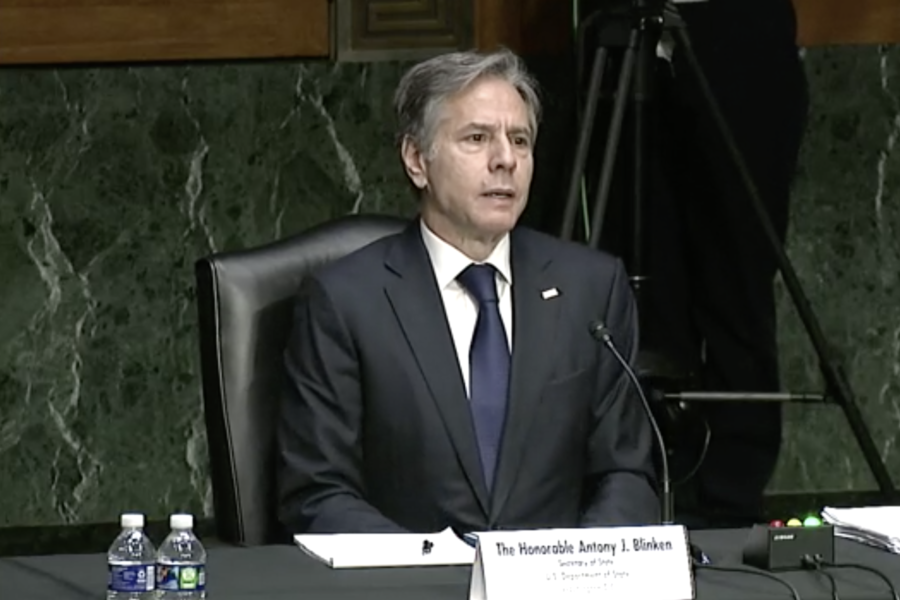 Secretary of State Antony J. Blinken appeared before the House Foreign Affairs Committee on Sept. 13 and the Senate Foreign Relations Committee on Sept. 14, testifying for nearly a combined nine hours about the U.S.’s withdrawal from Afghanistan that ended with scenes of chaos in Kabul and the deaths of 13 service members in a suicide bombing.

Over the course of two bruising sessions, Blinken was pressed hard on both the final weeks of the military withdrawal as well as future plans to rescue Americans and Afghans still in the country hoping to flee Taliban rule.

Blinken’s appearances are the first of several congressional hearings scheduled for top officials from President Joe Biden’s administration to address the withdrawal.

Defense Secretary Lloyd J. Austin III is set to answer questions from the House and Senate Armed Services committees in the next month, but scheduling conflicts prevented him from testifying Sept. 14. That led to criticism from several senators, including committee chair Sen. Robert Menendez (D-N.J.), who hinted he might subpoena Austin to make him testify.

Before both committees, Blinken repeatedly referenced intelligence assessments that led him and other top U.S. officials, such as Chairman of the Joint Chiefs of Staff Gen. Mark A. Milley, to believe the Afghan government and security forces would hold out for weeks or even months, instead of collapsing within days, as they did.

“What we did not anticipate was that 11-day collapse of the government security forces,” Blinken said Sept. 14. “That’s what changed everything.”

In the run-up to the Taliban takeover in Afghanistan, Blinken said, the worst-case scenario projected in the winter and spring of 2021 was that the Afghan government would fall in 18 to 24 months. By July, that timeline was moved up to the end of 2021.

Even as that happened, though, the U.S. military left Bagram Airfield, the hub of American operations during the Afghanistan War. That decision was criticized sharply by many Republican lawmakers during the recent hearings, citing the airfield’s expanded capacity and more strategic defensive location as superior to that of Hamid Karzai International Airport, where the evacuation eventually took place.

Blinken said the decision to leave Bagram when the military did was made by the Pentagon, not the State Department, but he defended the move as the right one in the context of the evacuation.

“Bagram is about 40 miles from Kabul. To the extent that the population that you’re seeking to evacuate is mostly in Kabul, the airport by far most convenient to them would be the airport in Kabul, HKIA,” Blinken said.

As the Taliban advanced from March to August, Blinken said, the State Department sent “19 specific messages” to American civilians in Afghanistan urging them to leave the country and offering assistance to do so. Many of those Americans, he added, are dual nationals who have lived in Afghanistan for years and for whom leaving the country is an “incredibly wrenching decision.”

But Rep. Peter Meijer (R-Mich.) pushed back on Blinken, pointing out a seeming disconnect between those messages for Americans to leave and the delay in processing Special Immigrant Visa applications for Afghans who had worked with the U.S. military—problems with the SIV program were noted for months before the withdrawal.

“If we were so concerned that we were sending these grim emails that Americans should have received and left the country immediately, how come we weren’t moving more quickly—why did it take 99 days before the first charter flight took Special Immigrant Visa applicants out?”

Blinken replied by saying he took over an SIV program that was “in a dead stall” with a large backlog. No interviews for the program had been conducted in Kabul for nine months, he claimed, and the State Department surged manpower and resources to the issue, raising the number of visas issued from 100 per week to 1,000.

In both hearings, Blinken estimated that there are roughly 100 Americans still in Afghanistan who have expressed a desire to leave. Other officials have used that same figure for more than a week now.

The exact number of Afghan SIV applicants, meanwhile, is unclear but likely numbers in the thousands—Rep. Ami Bari (D-Calif.) said his office alone has submitted 10,000 names of Americans and Afghans to the State Department. Blinken praised the work of State Department diplomats, veterans groups, and non-governmental organizations aiding in those evacuation efforts.

To get Americans out, Blinken said the U.S. is working to re-establish commercial operations at the airport in Kabul and is talking with the Taliban to ensure they are allowed to leave. At the same time, Blinken also acknowledged Sept. 13 that the Taliban is refusing to let several charter flights leave Mazar-i-Sharif International Airport in northern Afghanistan. There are reported to be a number of Americans included on those flights, and Blinken said the U.S. government needs “to see a process put in place to allow those flights to start to move.”

For Afghan visa seekers, the process could be more complicated. As the Taliban seized control, some applicants, fearing retribution for working with the Americans, destroyed documents critical to their applications. Blinken told senators that the State Department is working on a way to ensure those people get the documents they need, but he declined to speak more on the issue in a non-classified setting.

Blinken also declined to speak in a public setting on how the U.S. will maintain “over-the-horizon” intelligence, surveillance, and reconnaissance capabilities to ensure terrorist organizations do not flourish in Taliban-controlled Afghanistan.

That issue has been debated for months. Currently the closest U.S. air base is Al Udeid in Qatar, several hours from Afghanistan, and the U.S. has been negotiating with closer countries, such as Uzbekistan, for basing options.

Rep. Michael McCaul (R-Texas) pressed Blinken on whether Russian President Vladimir Putin had “threatened” U.S. President Joe Biden to not place American ISR capabilities in the region, but Blinken said the issue should be discussed in a classified setting.