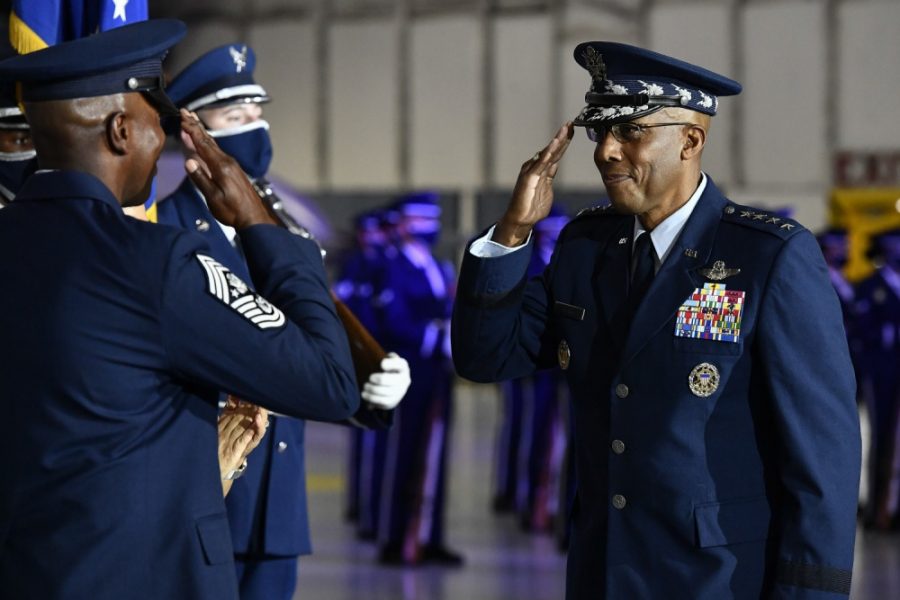 The Air Force, under the direction of its new top uniformed leader, risks losing its superiority and a future conflict if change does not begin immediately, from how the service buys and evaluates weapons to how it trains and deploys Airmen, Chief of Staff Gen. Charles Q. Brown Jr. writes in his first directive to the service.

In an eight-page “strategic approach” memorandum to the force, titled “Accelerate Change or Lose,” Brown issues stern warnings on the ramifications of not taking threats seriously, and the importance of the Air Force clearly making its case to the country at large, saying failure is a realistic consequence.

“Today we operate in a dynamic environment with factors that have us taking various actions to continue the mission and take care of Airmen and families,” Brown wrote. “As a result, we have a window of opportunity. Our Air Force must accelerate change to control and exploit the air domain to the standard the nation expects and requires from us. If we don’t change—if we fail to adapt—we risk losing the certainty with which we have defended our national interests for decades. We risk losing a high-end fight. We risk losing quality Airmen, our credibility, and our ability to secure our future.”

In the “months ahead,” beginning with action orders expected in the coming weeks, Brown said USAF will take steps that will begin to change its future, though he acknowledged some of the more broad measures will take time and collaboration within the Pentagon, with Capitol Hill, and with industry.

Air Force leaders have repeatedly said in recent years that air superiority, which the U.S. military has enjoyed uncontested for decades, is not guaranteed. Brown, however, issues an even more stern warning.

The loss of dominance is realistic, and closer on the horizon than most are willing to admit. China and other competitors “have made and continue aggressive efforts to negate long-enduring U.S. warfighting advantages,” he said. Beijing has resourced and introduced new systems that are “specifically designed to defeat the U.S. Air Force capabilities that have underpinned the American way of war for a generation,” warns Brown, who most recently ran Pacific Air Forces.

“While we and industry previously enjoyed the benefit of time, when U.S. Air Force dominance seemed unassailable, we are now seeing competitors outpace our current decision structures and fielding timelines,” Brown wrote.

In the future, Airmen will face advanced weapon systems, and have to fight for localized air superiority. By the nature of the service, Airmen will be the first to respond to an emerging crisis, while also providing deterrence.

“Tomorrow’s Airmen are more likely to fight in highly contested environments, and must be prepared to fight through combat attrition rates and risks to the nation that are more akin to the World War II era than the uncontested environments to which we have since become accustomed,” Brown writes. “The forces and operational concepts we need must be different.”

In the call with reporters, Brown said if the Air Force just ignores this possible reality “and [does] not talk about what’s at risk and the potential for high attrition rates, and we just kind of continue on the path we’re on, then shame on us. … I think I owe it to the Air Force, to our senior leadership, the discussion on what the potential is. And when you talk about a peer competitor and a high-end fight, that is one of the facts that we have to be thinking about. We can’t just wish that part away.”

The Air Force’s current requirements for its weapons systems and capabilities were designed decades ago, and “since then, much has changed.” In addition to the obvious advances in technology, the source of that technology has changed.

“Unlike the past, much of the emerging technologies that will determine our future are no longer created or funded by the Department of Defense,” Brown writes. “The processes with which we build capabilities for our Airmen have not adapted to these changes; the ways in which we test, evaluate, and train with them do not meet current or future demands.”

The Air Force must find new operational concepts and ways to bring on new systems more quickly, as opposed to the traditional, drawn-out process. This includes better ways of experimentation, rapid prototyping, and more collaboration with industry.

“We must also use this opportunity, given the stand-up of the U.S. Space Force, to evaluate and adjust internal U.S. Air Force structures and decision processes to include a renewed look at service-assigned roles and missions internal to the Department of the Air Force and even within the Joint Force,” Brown writes. “We must also consider how to achieve improved interoperability and data sharing with our closest allies and partners so that we can fly, fight, and win together.”

Collaborate ‘Within and Throughout’

The Air Force needs to successfully make its case before any changes can take root, especially with regards to how it can divest or take risk in legacy missions. Congress has historically opposed any Air Force move to get rid of older equipment, so “navigating the challenging times ahead requires effective collaboration among all stakeholders to acknowledge, balance, and share risk over time,” Brown wrote. Within the Air Force, the service must address its own impediments and acknowledge that future budget pressures “will require the most difficult force structure decisions in generations. We cannot shy away from these decisions,” he added.

Past force structure decisions and deferred modernization, which were made with the “best intentions, reflecting perceived needs at the time,” have put the Air Force behind potential adversaries such as Russia and China. To change this, there needs to be “ruthless prioritization” in modernization and changes to missions and capabilities, which is “informed by how they fare against our understanding of competitors’ theories of victory, ways of war, and force development strategies.”

In future acquisition, focus should be on the overall mission, rather than specific airframes and platforms—the basis of USAF’s decision to move away from Joint STARS recapitalization and toward the Airborne Battle Management System. Furthermore, Brown said the Air Force needs to be able to end programs when it chooses.

“Programs that once held promise, but are no longer affordable or will not deliver needed capabilities on competition-relevant timelines, must be diverted or terminated,” Brown writes. “Cost, schedule, and performance metrics alone are no longer sufficient metrics of acquisition success. We must be able to account for the interactive nature of competition and continuously assess ourselves relative to our adversaries’ adaptation.”

Changes also need to happen within the Air Force’s own personnel structure. The Air Force also needs to change the way it deploys its Airmen, including finding ways to “enable our Airmen to rest, recover, and train for the future,” writes Brown. “Innovative Airmen are diligently building better ways to generate and present Air Forces to the Joint Force. Garrison structures and processes must align to these new models, eliminating unnecessary bureaucracy and redundancies, and repurposing manpower to emergent and under-resourced requirements.”

The service has multiple deployment models, making it difficult to understand even within the Air Force, “much less [amongst] our joint partners …,” Brown said. The service is looking at streamlining these different models to better let Airmen train how they fight, and Brown said he wants to “dive in” to these discussions to find the “best model that provides a level of readiness, and ability to train forces, and how we are organized at home station.”

Operating in a contested environment means Airmen need “maximum delegation, trust, and empowerment” before a conflict starts, Brown said. This means Airmen at all levels need to be empowered to make decisions while also being held accountable, and leaders need to train to make the right decisions, while creating an environment that enables everyone to understand their contributions. In addition, the understanding of possible threats needs to start early.

“Starting with recruitment and accession, and through all of our Airmen and leader development programs, we must develop the Airmen we need for the high-end fight,” Brown writes. “The U.S. Air Force must develop and build deep institutional understanding of China and Russia.”

To keep the right Airmen, the Air Force needs to create an environment where all can reach their full potential by valuing diversity and enhancing the quality of service and quality of life for them and their families.

The Consequences of Failure

Wargames and modeling have repeatedly shown that if the Air Force fails to adapt, there will be mission failure, Brown warns. Rules-based international order may “disintegrate, and our national interests will be significantly challenged,” according to the memo. Without the changes he outlines, Brown warns the Air Force will not be prepared to do what the country asks of it.

“Urgent actions are required now to secure the U.S. Air Force’s continued ability to deliver global effects on strategically relevant timelines. … Our nation has come to expect much from its Air Force; we must rise to the challenges of tomorrow’s highly competitive environment to deliver.”