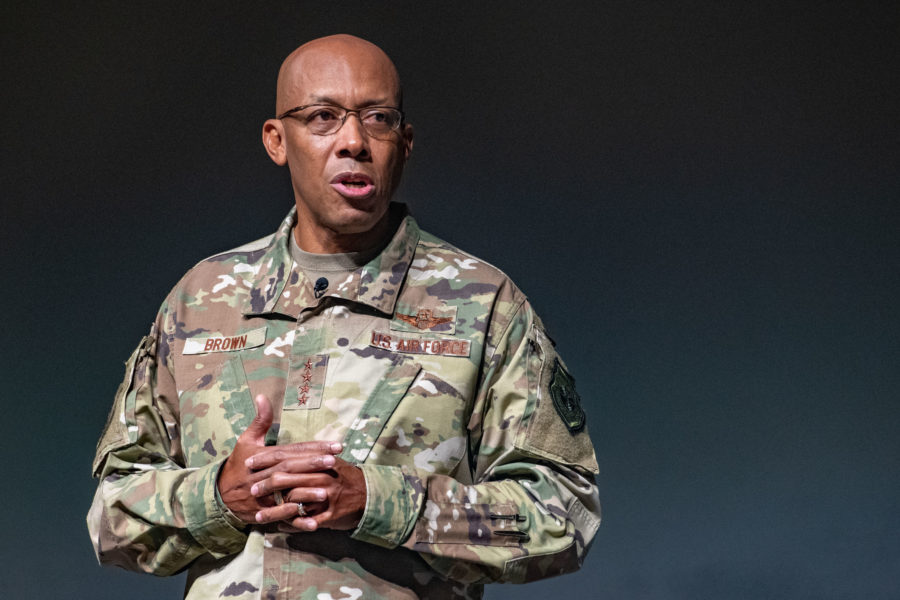 The Air Force doesn’t want its new “collaborative combat aircraft” to be exclusively part of the Next Generation Air Dominance system but is looking at other air- and ground-based platforms to direct such uncrewed airplanes, Air Force Chief of Staff Gen. Charles Q. Brown Jr. revealed, hinting that the CCAs will be ready for operations before NGAD is.

Brown also gave himself a letter grade of “C” for his first two years of service as the Chief, saying the grade reflects what rank-and-file Airmen have been telling him about conditions in the service. He also commented on developments in the Pacific and Ukraine, combat search and rescue, and the pilot shortage.

Speaking in a virtual interview with the American Enterprise Institute, Brown said the service is putting a “a lot of focus” on CCAs, which can be “a sensor … a shooter … a weapons carrier, and reduce the cost of operations.”

Asked if the CCAs will be ready to fly alongside NGAD when that system is slated to fly circa 2030, Brown said “we’re looking at … not to do it solely with NGAD.” He said the service is considering CCAs being directed from F-35s, “from a seat on the E-7 Wedgetail,” which is set to replace the E-3 AWACS, or from a KC-46 tanker, as well as “ground stations,” Brown said.

“We want to not constrain ourselves and say it’s tied to NGAD,” he said, but “how do we look at it from a broader perspective?” The F-35 and KC-46 are already in service, and the Wedgetail is planned to enter the inventory around 2027.

The Air Force has long planned to make the KC-46 a communications node, and service officials have recently hinted that it could play a role in air battle management as well.

Brown did not directly comment on when CCAs might be available for operational service, but they are among Air Force Secretary Frank Kendall’s “operational imperatives.” Kendall has said the technology is mature enough that CCAs can proceed into a program of record without further concept exploration work.

Asked if the U.S. will be ready to be a “stand-in force” within the next five years, though, Brown said, “we have some work to do.” But he said the Air Force will likely be a “hybrid” of stand-in and stand-off forces in the near future, “and that’s what we’re focused on.”

The allies and partners “are our stand-in force,” he said, and the Air Force “can’t build a strategy based on being a stand-off force … we have to stand with them.”

Although there is not yet a program office for the E-7, Brown insisted that “we’re moving fast” on the acquisition, and USAF has been “engaging on the Hill” about accelerating the buy, particularly with the Oklahoma congressional delegation, the constituency of which includes the Oklahoma Air Logistics Complex, where the E-3 and similar aircraft are overhauled.

Asked to grade his performance after two years as Chief, Brown said, “I’ll give it a solid ‘C.’ In some areas—I’m a C student, if you look at my GPA from college—but it’s not from a lack of trying.” As he engages with Airmen, he said, “they feel … the need to change,” and they agree with him that the service needs to be moving in the direction of agile combat employment and multi-capable Airmen—those who can do more than one specialized job.

“There’s a lot of energy there,” he said, and Airmen approve of doctrinal changes that push more authority to lower levels.

The push to simply state commander’s intent and leave the details to the troops “has really has resonated,” he said. “So there’s been some very positive things.”

Troops are concerned about inflation, despite several pay raises, and Brown said the Air Force is working through cost of living adjustments in various locations but doesn’t want to create a “rollercoaster” of changing compensation so that the service and the troops find it difficult to budget.

He also said he was warned at the outset of his tenure that “some of the things I want to do … will take four years.” He explained that initiatives such as his “accelerate change or lose” idea are “a cultural shift … And that takes time, so you’re not going to be able to flip a switch and make everything move forward.”

Brown said he and Kendall have a “similar mindset” about what path the Air Force needs to take and that they have a constructive partnership.

The Air Force would like to see a lower operating cost for the F-35, Brown said, but he acknowledged that early estimates of what it would cost to fly the jet were “overly optimistic.” The Air Force is shifting its calculation of operating cost from a per-flying-hour basis to “cost per tail per year” model, he said. This will give a better handle on true costs of ownership, he said.

Having recently returned from a tour of the Indo-Pacific, Brown reported that partners and allies are moving to strengthen their defenses and interoperability with the U.S.

China’s bluff charges of aircraft against Taiwan are that country’s way of “pushing the edge,” Brown said, in a “slow, insidious” way of setting a new status quo.

Agile combat employment is one of those cultural shifts Brown said he was referring to, “knowing that threat is a different threat than we’ve been used to for the last 30 years.” The ACE concept emphasizes dispersion of forces, base resiliency, and camouflage, he said.

Asked for the most recent lessons learned from the Ukraine war, Brown cited the “power of information” in getting a “lightning quick” unified NATO response as well as the ability of Ukrainian forces to deny Russia much value from its airpower.

“That’s something we need to think about collectively,” he said. He said Russia’s doctrine of tying airpower to ground forces clearly isn’t working well.

Brown also said the value of allies and partnerships has been proven by the conflict, especially in airpower terms. Exercises and doctrine allowed NATO to “move airpower around rapidly” to address the threat, and NATO has demonstrated its connectivity and interoperability in deterring Russia from moving beyond Ukraine, as well.

Brown said the Air Force is still trying to think through how it will perform combat search and rescue, given the large distances in the Pacific and the vulnerabilities of rotary-wing aircraft such as the HH-60 and CV-22.

“We’re doing combat search and rescue the same way since Vietnam,” he said, arguing that an overhaul of the concept of operations is needed and being worked on. He acknowledged that the Air Force has cut the buy of HH-60Ws and is trying to figure out what standing force of CSAR operators is required.

“The threat is much different today,” he said. “I’m afraid we’re going to lose a bunch of people on a helicopter or CV-22, so we really have to think differently about how we do” the mission. Much of the focus now is on autonomous vehicles to extract downed fliers, he said. If the Air Force loses an unmanned aircraft in an attempt to retrieve personnel, “it’s no big deal,” he said.

The Air Force is employing a variety of approaches to closing its pilot shortage, mainly in the areas of using technology to speed up pilot training and in the creation of “air academies” that offer young people an opportunity to earn a license. Those who do will be offered pilot slots in the Air Force, he said. Brown reported having regular meetings with the airlines to discuss national strategies to increase the number of pilots.

“We’re in this together,” he said.