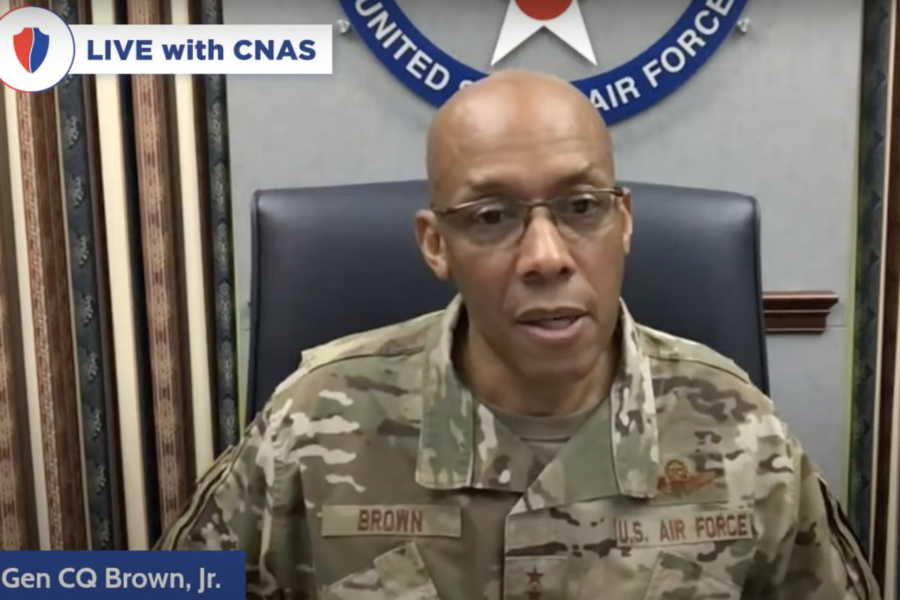 Brown on Future Combat: ‘I Can’t Predict the Future, But I Can Shape It’

The defense budget coming out May 28 will contain few big surprises. Plans to retire some older planes have already been reported, and the longer-range plans typically surfacing at budget time—known as the Future Years Defense Program, or FYDP—are still being debated. But inklings of the service’s direction will be sprinkled throughout, all of them designed to maximize options going forward.

“I can’t predict the future,” said Air Force Chief of Staff Gen. Charles Q. Brown Jr. in a virtual conversation hosted by the Center for New American Security on May 25. “But I can help shape it.”

Shaping the future means ensuring U.S. forces can’t be stymied in the face of opposition or by failed programs that don’t deliver. “I want to make sure we have options that we’ve actually taken a look at,” Brown said. Streamlining today’s fighter aircraft inventory and investing in future fighter and bomber capabilities now will help set up those options in the future.

Experimenting with and fielding capabilities as they become available is also part of that plan. The USAF announced days earlier that it will begin fielding the first fruits of the Advanced Battle Management System this year, creating a pod that will fly on the KC-46 that will leverage the aerial refueler to help F-22s and F-35s communicate.

This is the concept behind JADC2, connecting “the right sensor to the right shooter,” Brown said. “It’s really about the movement of information and data to help drive decision advantage” and will ultimately involve sharing data and situational awareness across every domain—air, land, sea, and space. “We don’t do any one of these in isolation,” Brown said. “We’ve got to be able to work together,” so data must be shareable. “I don’t need to use every piece of data from every other service,” he added. “I want to make sure it’s available in case I need it, and vice versa. I want my data available and usable [by joint partners]. That’s where JADC2 comes together: when we have a shared understanding to sense, make sense, and then act and execute.”

The resulting “sensing grid” will provide multiple pathways for channeling information from platform to platform across the battle space, forming and reforming connections in the face of jamming and interference.

Training Airmen to operate under those conditions will be as critical to enabling JADC2 as developing new technology, Brown said.

“The Air Force just released our newest doctrine document, where we talk about, you know, centralized command, distributed control, and decentralization execution,” he said. “For our Airmen … to employ that new doctrine in mission-type orders, [they need] to understand that communication will be contested. And you will not have perfect information, and you’re going to have to be able to make decisions at a lower level. We’re not going all the way back up to the highest level of command to make those decisions.”

That’s a theme Brown has pounded on for his entire nine months as Chief, a theme that is closely tied to his bumper-sticker objective to “accelerate change or lose.” He applies it not just to warfare and new technology development, but also to the way systems are developed and acquired. The Air Force is going through a “cultural shift,” moving away from fully integrated hardware and software solutions in favor of acquiring hardware that might be able to do different things in the future as new software solutions emerge. Such an open architecture would be more flexible and allow for new capabilities to roll out over time, much as new apps and operating system enhancements are rolled out on phones and other devices.

New programs and innovations can help fuel that, from the Air Force’s software factories to collaborations with non-traditional and even traditional contractors. Airmen need to be willing to take chances, he said.

“You can’t be innovative and risk averse at the same time,” Brown added. “We’ve got to be able to take a little bit of risk, and some things are not going to work. But as long as we’re failing forward, that’s [what] we need to be, so we can accelerate change. So we don’t lose.”