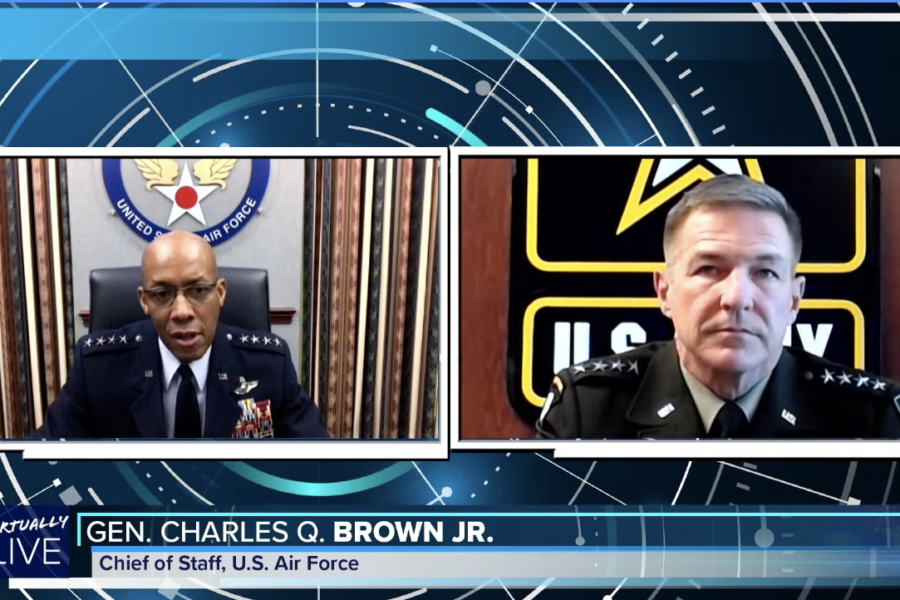 The new “revolution in military affairs” is the recognition that information and speed of decision-making will be the keys to victory in a future conflict, Air Force Chief of Staff Gen. Charles Q. Brown Jr. said in a March 29 panel discussion with Army Chief of Staff Gen. James C. McConville.

“It’s all about … decision advantage,” Brown said in a virtual summit presented by The Hill, which also featured former defense officials and members of Congress. “It is a revolution in military affairs, and not just from a technical standpoint, but it’s a mindset, as well.”

Brown said he’s convinced that doing things “the way we’re doing them today, I don’t think we’ll be successful tomorrow.” He’s pushing his “accelerate change or lose” message in part because reliable information has to be the top priority in future fights. His comments were echoed by former defense officials, who agreed that resilient connectivity should be the centerpiece of defense connectivity.

In the next big conflict, the “fog of warfare” will be far more acute, Brown said. “We’ll either have information overload or information that is not necessarily clear, … or we could be disconnected.” The services must work now to make their information and networks more reliable, as well as be able to function without connectivity if necessary.

“We’re really thinking differently about how we approach things,” he said, noting a renewed emphasis on “how we empower Airmen” and delegate authority to make decisions “down to the lowest capable and competent level.”

The Air Force also has to be “willing to take a little bit of risk,” which he said the service hasn’t done “in the last 20 to 30 years in our fight against violent extremism.”

The service’s calling card will have to be continued “range, speed, and agility,” with the ability to strike “any target on the face of the globe” as well as “responsiveness” to quickly evolving conditions.

McConville agreed the “next fight is going to be different, [with] different technology, different organizations, different doctrine so we can … win.”

He said the U.S. must seek “overmatch” with adversaries if possible, but may have to settle for simply being able to inflict sufficient damage on an enemy that it is able to deter a war in the first place. Peace will be preserved through “strength, strong allies, and partners,” McConville said. The U.S. needs to be at least strong enough that “no one wants to take us on.”

He did not mention his service’s efforts to take over key parts of the deep strike and defense suppression missions from the Air Force. When asked about differing service “visions,” of future warfare, Brown observed simply that all the branches “have a different perspective” of “how we look at the strategic environment, and how all of us come together” in a way that will bring success.

The Army Chief warned, though, that adversaries—China in particular—will pose big challenges to the U.S. in ways the military is not used to.

“We’ve seen what a pandemic can do to us,” McConville said. “So we should not assume that those who wish us harm would not be willing to use those things” in war.

He also said the Army is especially concerned about the proliferation of unmanned systems, which he likened to the “the IEDs of a few years back,” which were simple, low-cost ways to severely disrupt Army operations.

Both Chiefs urged a “whole of government” approach to meeting challenges from China, Russia, and other adversaries.

Former Obama administration Defense Secretary Leon E. Panetta said “there’s not much question in my mind that we’re behind” in the race to faster decision-making via 5G and artificial intelligence.

“We should have seen this coming a long time ago. We didn’t pay enough attention to it,” Panetta said, asserting the U.S. did not invest adequately in the technology. China, meanwhile, has invested a great deal in it, he said, while the U.S. “faltered in terms of this aggressive effort to always stay ahead of the curve. We’ve got to go back to that.”

He thinks the Biden administration “recognizes the need to invest in these new technologies for our own defense, but it’s going to take a while.” Panetta urged government financial incentives for the private sector to pursue these efforts because “mark my word, that is the future in terms of our ability to protect our national security and international interests.”

Former Undersecretary of Defense for Policy Michèle Flournoy warned that the Chinese “have convinced themselves that we are a nation in decline” and to “avoid miscalculation” on their part, the U.S. needs to demonstrate a robust investment in defense, particularly in connectivity, and its commitment to its allies.

“We need to show them that we’re recovering from COVID, that we’re back on our feet, addressing key domestic challenges,” she said. “The sooner they see us investing in key technology areas and really modernizing and transforming our military, optimized for deterrence in the Pacific, the more we’re going to counter that narrative” that the U.S. is ceding world leadership.

Flournoy said “all of the wargames that have been done recently, if accurately reported,” lead to the conclusion that “the currently programmed force is not going to keep our edge over the next decade. We will gradually lose our confidence in our ability to deter.”

The U.S. military is “overinvested in legacy systems and under-invested … in technologies” that ensure that Army units, fighter squadrons, and ships “are survivable and resilient and able to move, communicate, [and] strike … in a much more contested environment, under constant attack, and disruption, she said.

Chinese doctrine calls for ending a fight “before we even engage, by taking down our command and control system, and our ability to move, and target, and communicate,” Flournoy said. That demands the U.S. “build a resilient network of networks, which is what joint all-domain command and control is about. That needs to be one of the bets that the Pentagon places in the next four years if it’s going to have what it needs to deter in the next 40.”

Turning the ABMS Strategy into a Reality