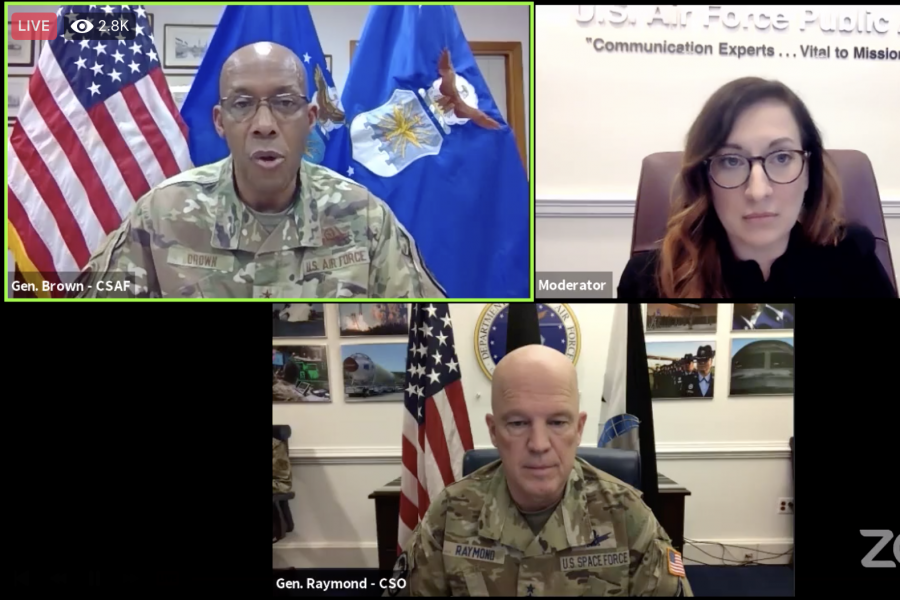 Brown: ‘Shame on Us’ if Military Diversity Efforts Falter

Change is coming to make the Department of the Air Force a more diverse, equitable place—but it won’t happen overnight, the four-star generals in charge of the Air Force and Space Force said in a Dec. 22 town hall on racism and discrimination.

“Shame on us if we miss this opportunity to make a change that’s required across our Air Force to make it better, whether it’s the Air Force or the Space Force,” Air Force Chief of Staff Charles Q. Brown Jr. said.

The discussion comes the day after the Department of the Air Force released the results of an Inspector General report on racial disparities across the force. A call for anecdotes on racism and inequality earlier this year prompted an avalanche of more than 123,000 responses across more than 27,000 single-spaced pages of feedback, alongside more than 100 in-person interviews.

The investigation confirmed earlier studies and reporting that found Black Airmen and Guardians are treated differently in the military discipline system and when pursuing career development opportunities.

“Varying degrees of disparity were identified in apprehensions, criminal investigations, military justice, administrative separations, placement into occupational career fields, certain promotion rates, officer and civilian professional military educational development, and some leadership opportunities,” the Department of the Air Force said Dec. 21. “The data does not address why racial disparities exist in these areas, and that while the data shows race is a correlating factor, it does not necessarily indicate causality.”

Over the past decade, white Airmen were promoted up the ranks more often than Airmen who are Black or members of other minority groups, according to an Air Force Magazine analysis. Average promotion rates for majors and colonels are more than 5 percentage points higher for white Airmen than Black officers, and the gap widens to around 10 percentage points for lieutenant colonels. Trends are similar in the enlisted force.

Brown said he’s read the 150-page report cover-to-cover five or six times. The document reflects his own experiences as a Black man coming up through the ranks and are “things I’ve actually felt,” he said. The first Black person to serve as the top officer of a U.S. armed force, Brown released his own viral video over the summer detailing his experiences with discrimination and feeling like an outsider.

It’s far from the first time the Air Force has looked into the issue: The IG team reconsidered 23 past studies and reports on race and demographics in the military as part of the investigation.

“Think about what happened. … Look at all the protests over the course of the summer,” he said of the national unrest sparked by Floyd’s death in May after a white police officer knelt on the Black man’s neck for nearly 9 minutes.

“When those other studies were done, there probably weren’t as many protests,” Brown said. “Think about it: It was 1973 and beyond. So you didn’t have a major national event that focused us on this particular topic, until this summer.”

Floyd’s death has opened the door for difficult conversations about persistent systemic racism across the military and American society at large. Over the summer, Air Force Magazine spoke to several Black service members about their experiences with discrimination during their time in uniform, and their hopes for improvement.

The pilot field that dominates the Air Force’s considerations and leadership remains overwhelmingly white and male, and the service has recently announced changes to height requirements and aircraft design that will allow more women into the cockpit. But there’s also more to do to make aviators more racially diverse.

“When I was a captain, I did an interview for Air Force Times, and it talked about the percentage of African Americans that were pilots. It was 2 percent. That was 30 years ago,” Brown said. “You know what it is right now? It’s still 2 percent.”

While the Air Force can diversify its top leadership by pulling the best candidates from career fields other than pilots, Brown cautioned the solution needs to be more holistic.

“Will the shape of the Air Force change in the future as we look at cyber, information operations, and other areas? I think it will. But it won’t make a dramatic shift,” he said.

He and Chief of Space Operations Gen. John W. “Jay” Raymond pointed people to ideas that could spur lasting change. For example, the Air Force will reconsider whether its Officer Qualifying Test and Weighted Airman Promotion System tests offer the fairest way to assess proficiency. The Space Force wants to ditch tests for promotion and assignment boards that take the value of diverse backgrounds and ideas into consideration.

Air Force Materiel Command boss Gen. Arnold W. Bunch Jr. is taking a new approach to inclusion in the civilian workforce, which can spend much longer in the same job or field than military personnel. He started a “status of discipline” program like that is used by service members to track and discuss performance issues. That can raise red flags of barriers to progress within the command or biases in certain units or fields.

For Airmen and Guardians who work with a member of a white supremacist group, “We need to hear about it,” Brown said.

“We shouldn’t tolerate that type of leadership, particularly at the [non-commissioned officer] level in our Air Force, our Space Force,” he said when asked about a technical sergeant who led troops while participating in white supremacist activity, a practice regulated by the Defense Department.

Brown and Raymond encouraged troops to continue productive dialogue when they can, and to call in backup when needed. There should be a balance between mission readiness and ensuring people’s voices are heard on the issues that affect their quality of life, they said.

Another step in the right direction is the creation of a diversity and inclusion office at the department’s headquarters, which Brown said Black personnel have long wanted. That group, along with other initiatives and a broader culture shift, aim to shrink the number of incidents that warrant Inspector General or equal-opportunity program attention.

Building a Force Based on Inclusion

For the Space Force, the investigation is a chance to rectify racist practices and attitudes from the start. The Pentagon’s newest service is drawing up a human capital plan that looks to diversify the workforce and ingrain a culture of acceptance.

“Our forces are more ready when everybody that comes to work, regardless of race, color, sex, creed, or religion, feels welcome and has an environment [in] which they can flourish across all of our ranks,” Raymond said. “This is not affirmative action; this is equal opportunity and inclusion.”

The event raised some criticism that Chief Master Sergeant of the Air Force JoAnne S. Bass, the first woman and Asian American to serve as USAF’s top enlisted member, did not offer her perspective alongside the two four-star generals.

Brown noted that Bass and Chief Master Sergeant Roger A. Towberman, the Space Force’s Senior Enlisted Adviser, are considering doing their own town hall for enlisted Airmen and Guardians.

To those who asked why people believe racial disparities still exist now that the Air Force has a minority Chief of Staff, Brown said: “Just because I’m here doesn’t mean that’s the end of the story.”

“Is it a woman that comes behind me? Is it someone of a different sexual orientation? Is it another diverse group? It can’t be a one-and-done,” he said. “We can’t slap the table and pat ourselves on the back now that I’m sitting here as the Chief of Staff.”