Skip to content
A 99th Expeditionary Reconnaissance Squadron U-2 Dragon Lady pilot drives a high-performance chase car on the runway to catch a U-2 performing a low-flight touch and go at Al Dhafra Air Base, United Arab Emirates, Mar. 15, 2019. While driving the chase cars, U-2 pilots aid the pilot flying the U-2 by radioing altitude and runway alignments during take-offs and landings. Air Force photo by Senior Airman Gracie I. Lee.
Expand Photo 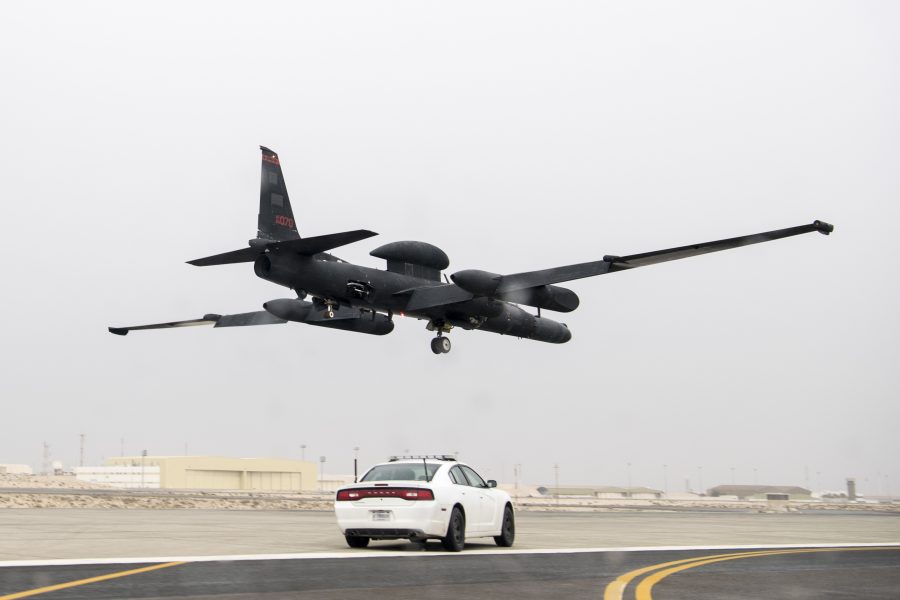 Budget Elicits Confusion Over Fate of U-2

The Air Force says it will not divest its fleet of U-2 Dragon Lady planes in fiscal 2025, despite language to the contrary in the service’s 2021 budget request.

Air Force Magazine first reported that the budget submission, unveiled Feb. 10, planned to start retiring the Cold War-era Dragon Ladies in five years. However, the Air Force also projected spending $77 million on developing updates for the fleet from 2021-2024, but zeroed out research and development spending in 2025.

“Currently, the Air Force plans to divest the U-2 in FY ‘25,” the service’s budget documents state. “Until that time, in order to meet [National Defense Authorization Act-] mandated capability and capacity, the Air Force continues to invest and modernize the U-2 program.”

But the service said that mentions of divestment in the budget proposal were incorrect.

“The Air Force FY ‘21 budget position is to fully fund the U-2 through FY ‘25,” service spokeswoman Laura McAndrews said Feb. 11.

U-2 manufacturer Lockheed Martin is looking into the confusion as well.

It’s possible the Air Force did forecast the U-2’s retirement, but walked back the plan without changing the official projection. An Air Force spokeswoman declined to say whether the jets were on the chopping block.

If that is the case, it would be the latest step in the Air Force’s waffling over whether to get rid of an old airframe in favor of other intelligence-collection systems like unmanned aircraft or satellites in orbit.

Amid this uncertainty, Congress told the Air Force in 2017 to keep both the U-2 and Northrop Grumman’s RQ-4 Global Hawk, a high-altitude ISR-collection drone that has threatened to replace the Dragon Lady, until a better option comes along.

“Both aircraft are considered high-demand/low-density ISR capabilities that are essential for contributing to combatant commanders’ high-altitude ISR requirements and should remain in the Air Force inventory until a suitable replacement can be developed that: meets or exceeds current high-altitude ISR capabilities; does not result in a reduction of current high-altitude ISR capacity; and would not result in increased operational and support costs unless the increased capability is justified by the Secretary of Defense’s analysis,” the conference report accompanying the Fiscal 2018 National Defense Authorization Act stated.

U-2s are iconic for their use in taking photographs that sparked the Cuban Missile Crisis, and for the astronaut-like flight suits their pilots must don as they fly up to the edge of space.

The Air Force has so far decided not to cut the U-2 in favor of the Global Hawk, arguing it needs to retain the aircraft because intelligence, surveillance, and reconnaissance needs are so pressing and the two platforms complement each other.

Cutting the U-2 would have meant a sweeping drawdown of USAF’s high-altitude ISR aircraft, as the service also plans to cut older versions of the RQ-4 in fiscal 2021.

The Air Force expects to own 31 U-2s in 2021, including four trainer aircraft. In the next few years, it will continue upgrading the Dragon Lady’s sensors, improve its avionics, modernize its communications and signals intelligence capabilities, and enable faster, “improved collection against emerging threats and capabilities,” according to budget documents.

Lawmakers have already started questioning that suggestion, while the Air Force claims that bolstering the Battlefield Airborne Communications Node mission with manned aircraft will help replace the oldest Global Hawks.

“To offset the Block 20 retirements, we’ll buy additional E-11s,” Maj. Gen. John Pletcher, the Air Force’s deputy assistant budget secretary, told reporters Feb. 10. “The signals and imagery intel mission will continue to be accomplished by the U-2 as well as space-based capabilities.”

Editor’s Note: This story was updated at 9 p.m. on Feb. 11 to include USAF’s clarification of its budget proposal.