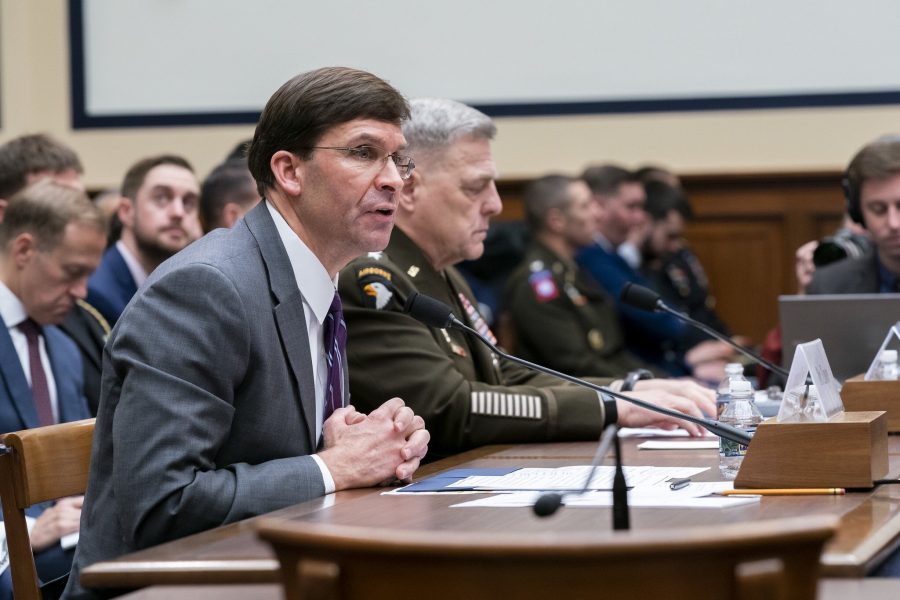 Lawmakers on Feb. 26 signaled a harsh fight ahead over the Pentagon’s plans to retire aging aircraft and shift spending from weapons systems to border wall protection.

The Defense Department’s total $705.4 billion fiscal 2021 request looks to retire dozens of USAF aircraft, including KC-10s, KC-135s, A-10s, F-15s, and B-1s. Defense Secretary Mark Esper and Chairman of the Joint Chiefs of Staff Gen. Mark Milley in their first testimony on the fiscal 2021 budget request attempted to persuade the House Armed Services Committee these decisions are necessary in order for the department to prepare for future conflict.

“There’s a fundamental issue at stake here, and it’s coming up in a lot of areas, whether it’s tankers, maritime, ships, whatever it is. It’s a question of divest to invest,” Milley said. “We are at a pivot point … relative to the changing character of war and the geopolitical landscape that’s occurring in the world today. We’ve got to make some fundamental choices and to lay down the markers for what the future military’s going to look like in five to 10 years, and if we don’t make those choices, we’re going to end up on the short end of the stick.”

Multiple committee members signaled their intention to block these retirements. On the A-10s, Rep. Austin Scott (R-Ga.) said the Congress has repeatedly blocked retirements of Warthogs until the Pentagon could convince Congress the F-35 is capable of handling close air support, and that has not yet happened.

Rep. Donald Norcross (D-N.J.) said the Air Force’s decision to retire legacy tankers before the KC-46 is operationally capable will lead to a capability gap. Even if Boeing and the Air Force agree on fixes to the deficiencies impacting the Pegasus, full integration will be years away, so “why would we be retiring more refuelers when we’re building up the capacity to need those?” Norcross asked.

U.S. Transportation Command has come forward with recommendations to retain some of the targeted tankers, even as the retirement plan moves forward, saying the command cannot afford to lose any tanker support. Esper acknowledged the need for refueling capacity is “not sexy,” though he emphasized its importance.

He said he hopes the “zero-based review,” which he has requested from all combatant commands, might free up some of the refueling capacity.

Esper and Milley also faced criticism from lawmakers on the administration’s reprogramming plan to shift $3.8 billion from weapons systems such as F-35s, C-130s, and MQ-9s to build barriers along the southern border with Mexico. Milley told the committee he conducted an analysis on the proposal, which found that taking the funding away does not create a “significant, immediate, strategic negative impact to the overall defense of the United States of America.”

The proposal, however, has met opposition from lawmakers, including some Republicans on the committee. Ranking member Rep. Mac Thornberry (R-Texas) said it substitutes the judgment of Congress for the judgment of the administration. Rep. John Garamendi (D-Calif.) forecasted a fight over the plan, saying the Pentagon had previously said the funding for the weapons program was necessary when it was appropriated by Congress.

“Obey the law, and recognize you’re in for a major brawl,” he said.