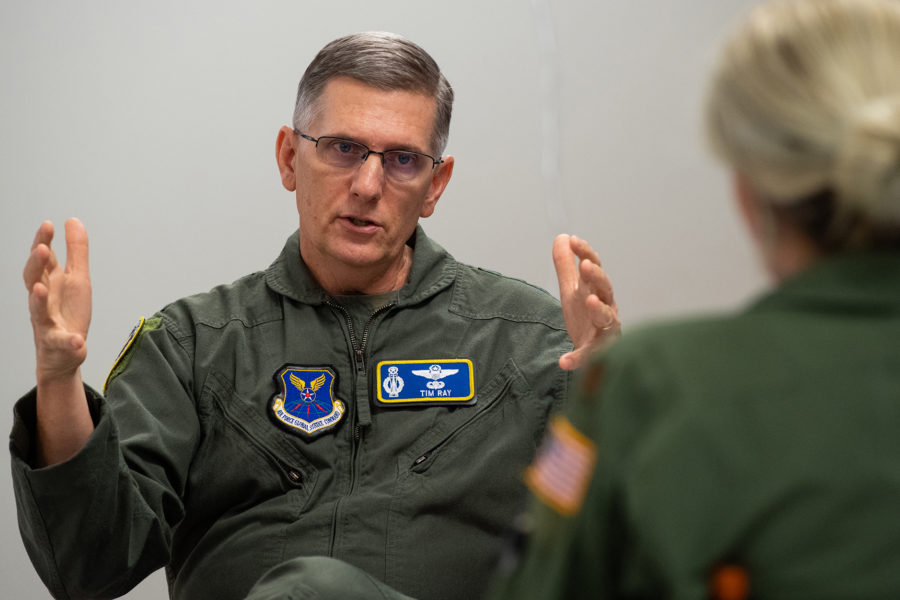 Ray: Pace of China’s Strategic Advancement is ‘Breathtaking,’ Cause for Alarm

China’s strategic portfolio is advancing even faster than the U.S. anticipated, and this should be cause for concern, said Air Force Global Strike Command boss Gen. Timothy M. Ray.

“The pace is breathtaking,” Ray said during an AFA Mitchell Institute for Aerospace Studies streaming event June 3. There have been frequent episodes over the last six months where China demonstrated a capability and the U.S. intelligence assessment fell “short of what they were accomplishing,” he added.

China is also clearly moving to secure its regional sphere of influence, and America’s allies and partners “need to know we’re there for them.”

“I think [China is] thinking very clearly about the regional and global problem set. I think they’re building the arsenal” to address it, Ray observed.

Ray has briefed members of Congress at the top secret level on the situation, but “even at the secret level, it’s pretty intimidating.”

“They’re working through the problem—warheads, delivery systems, command and control, warning, how fast, and how you field it—and they’re getting glowing grades in all those things,” Ray said. The pace of China’s progress and the “diversity of their approach … commands respect,” he asserted.

Ray said that going forward with the U.S. Ground-Based Strategic Deterrent missile program will be $38 billion cheaper than attempting to upgrade and extend the life of the Minuteman III missiles. However, he noted, “the price tag has gotten bigger” each time the decision has been postponed.

The Minuteman suffers from “old parts” and the inability to repair them, Ray said. The situation is “just going to get worse,” he added.

Deleting the GBSD from the nuclear triad of bombers, ICBMs, and sea-launched ballistic missiles would require other investments to achieve the necessary deterrence, Ray said.

“We’ll need more bombers, tankers, crews,” and they’ll need to be on alert, Ray said. It would be a “bill to pay that would come at the expense of other things.”

Ray said AFGSC has “tripled the number” of bomber task force deployments over the last year, but the pace will need to be reduced.

B-52s were simultaneously deployed in Europe, the Middle East, and the Indo-Pacific for short periods last month. AFGSC conducted 18 bomber task force deployments in fiscal 2020, and it’s “about 50 percent higher this year,” Ray reported. That’s “a fourfold increase from ’19-’21.”

The bombers “stepped in to meet the demand,” he said, for example, supplying bombers within 51 hours to Central Command after a “cold call.”

This is a pace “that we can keep up just a little bit longer, but then I think we need to slow down just a touch, and get a little bit better at what we do,” Ray said. The “sweet spot” for such deployments is somewhat lower than what AFGSC has been accomplishing.

While the rest of the force scaled back its operating tempo during the COVID-19 pandemic, “we got better,” he said. “We had the best bomber readiness in the history of the command in the middle of COVID-19. The B-1s slowed me down a little bit recently, [but] … nuclear readiness stayed high.”

The bombers are “covering the withdrawal in Afghanistan; we’re one of multiple over-the-horizon … joint fires covering that” and the command is doing “phenomenal work with just a handful of bombers.”

Overall, “I think the morale is high. The entire bomber force has really embraced this way of life … They see the strategic importance, see the importance to allies, and they’re getting the practice in the long-range kill chains, that we know we’re going to have to do under duress, and we know we can do them from anywhere on the planet, very quickly.”

Ray said he expects the recent grounding of the B-1—the third in recent years, this time because of a fuel system problem—will be lifted soon.

“We’ll be in a better place next month,” Ray said. “We need to do this safely and smoothly.”

Ray also said the Navy has not asked for help with its new sea-launched nuclear cruise missile, and that there are no plans to achieve any commonality between it and the Air Force’s Long-Range Stand Off missile, but USAF is willing to share knowledge if asked.