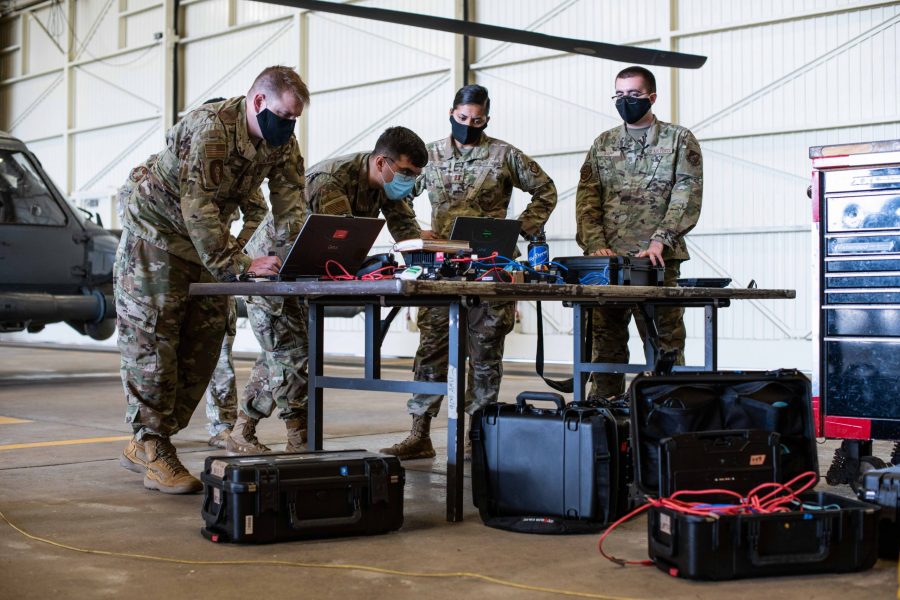 Communicating on the Fly

As the Air Force leans in to the Agile Combat Employment concept—in which smaller groups of Airmen can deploy rapidly to locations with varying degrees of austerity—communications and cyber Airmen must find ways to be lighter and leaner as well.

Enter “communication flyaway kits”: light packages that can “fit into a few transit cases” and be “called upon at a moment’s notice to provide DOD networks and voice services to environments ranging from something extremely expeditionary to something more modern and built up,” Lt. Col. Daniel Waid, commander of the 18th Communications Squadron, told Air Force Magazine in a phone interview.

The kits are a “scalable solution that allow you to go down from anywhere between two to upwards of 50 people, … providing them secure, cyber-secure communications,” Waid continued.

It’s not a new concept, but the 18th Wing is modifying it to meet their needs in the Pacific.

Maj. Tyler Studeman, director of ACE for the Kadena Air Base, Japan-based 18th Wing, explained that the “tyranny of distance in the Pacific theater,” coupled with the threats around the world, underscore the need for Agile Combat Employment. Projecting combat capability requires the ability to communicate, he said, “whether it’s to say, ‘Hey, we need help,’ or ‘Hey, we’re established and doing well,’ all the way to, as we go out and fly combat missions, we need to know who else is out there with us, in order to make sure that we’re coordinating our efforts… to get the most optimized airpower that we can possibly generate.”

Senior Master Sgt. Johnathan Butler, the 18th Wing’s superintendent for ACE, noted that any time Airmen go forward, “Priority No. 1” is to set up communications, “reach back to higher headquarters, wherever that may be, and establish a good line of communication so that we can receive orders on how to proceed.” The kits—150 pounds in two Pelican cases—allow Airmen to set up secure communications within 30 minutes, “which is pretty amazing,” Butler said.

Staff Sgt Patrick Tobias, client systems supervisor with the 18th Communications Squadron, said the unit also is experimenting with solar panels and “different ways to connect,” because “you never know what’s going to be on site” as far as infrastructure.

“I’m looking at things just to make our lives easier and then just to provide better support for the customers so that they have everything they need,” Butler said.

There is a “huge opportunity” in the Pacific to exploit newer technologies in order to get capability and support “to that austere edge,” Waid said. “What we’re looking at is … solar panels, everything from that to like self-healing networks to different types of newer satellite services,” as well as how to use the different types of bandwidth provided by those satellites.

The squadron has been practicing these concepts in local and regional training exercises throughout the year, including a December exercise in which Airmen operated from four different locations in and around Okinawa with different types of aircraft.

The eventual goal is to provide “operators the flexibility on where they operate from and how they communicate,” Waid said. “We need to be flexible, not just as Airmen, but as cyber professionals. So whatever the 18th Wing and the operations folks need, we can provide that on the fly.”

Butler said that gets to the heart of ACE “as a whole and a concept”: “to give our civilian leadership more response options [as] tensions rise and fall in the geopolitical climate”

It also makes it harder for adversaries to target them. “If you have one target, it’s pretty easy. If you suddenly have two dozen targets, it’s a lot more difficult … We’re trying to get inside their decision-making circle in that decision process, their OODA loop, so that they reconsider their actions,” he added.