Skip to content
In-flight testing is conducted to certify a Negatively Pressurized Conex prototype at Joint Base Charleston, S.C., on April 30, 2020. The NPC was rapidly developed and designed to fit inside both C-5 and C-17 aircraft to enable safe transport of up to 28 patients, as well as teams of medical professionals to medical facilities around the globe. Air Force photo by Staff Sgt. Chris Drzazgowski.
Expand Photo 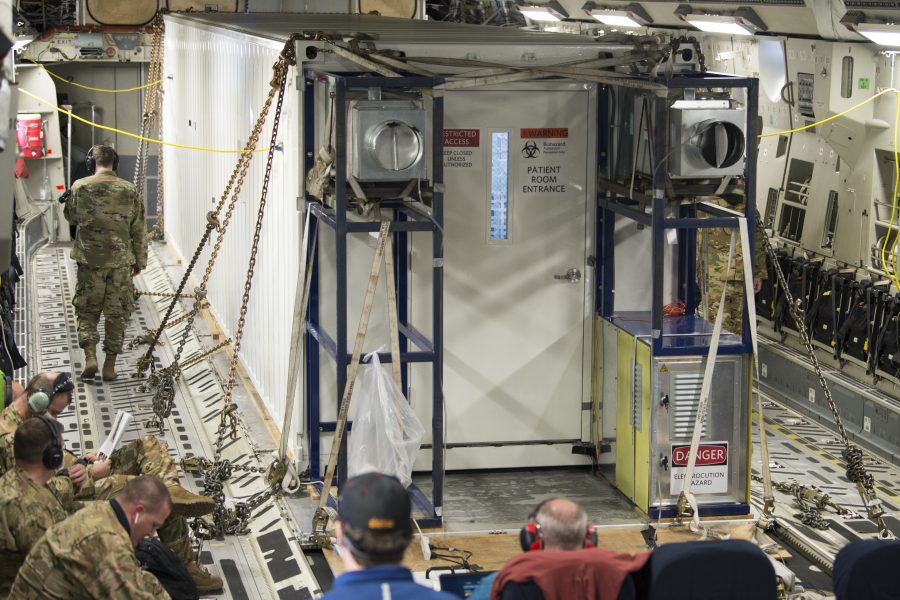 The first Negatively Pressurized Conex ready for service landed at Ramstein Air Base, Germany, on June 24.

The NPC is a steel shipping container adapted so air will always flow into the capsule. It can be loaded onto C-17 Globemaster IIIs and C-5M Super Galaxies, and it can transport up to 23 COVID-19 patients without risk of contaminating the crew, according to a USAF release.

When the COVID-19 pandemic began, the Air Force increased training on the Transport Isolation System—a chamber developed during the 2014 Ebola outbreak. However, the TIS can only carry two to four patients at a time. The NPC increases patient transportation capacity sixfold.

A smaller variation, the Negatively Pressurized Conex-Lite, can be used on C-130 Hercules aircraft.

“In less than 30 days, the NPC went from an idea on a napkin to a proven concept, … and only 88 days from that idea to the delivery of an operational system,” said Lt. Col. Paul Hendrickson, Air Force Life Cycle Management Center Chemical, Biological, Radiological, and Nuclear Defense material leader.

A prototype NPC went through initial testing from April 21-30 at Joint Base Charleston, S.C. The NPC-L began operational evaluation on June 1, followed by the larger NPC on June 7.

The Program Executive Office for Agile Combat Support led a group of teams from across the country to ensure the NPC met four primary requirements for a patient transportation method, said Hendrickson. The NPC had to show it could contain a virus from the aircraft and aircrew, be useable for aeromedical teams, have the potential to be certified airworthy, and be safe to fly, he said.

“The NPC has proven capable of satisfying all of those requirements,” said Hendrickson.

The NPC is a crucial addition to Air Force readiness, said Lt. Col. Timothy Mach, Air Mobility Command Requirements Division chief. It both protects Airmen from virus contamination as well as the readiness of where patients are moved from, he said.

“We need to take care of the individual infected by the virus and mitigate the chance of it spreading. The NPC allows us to perform those life-saving movements in only hours,” said Mach.