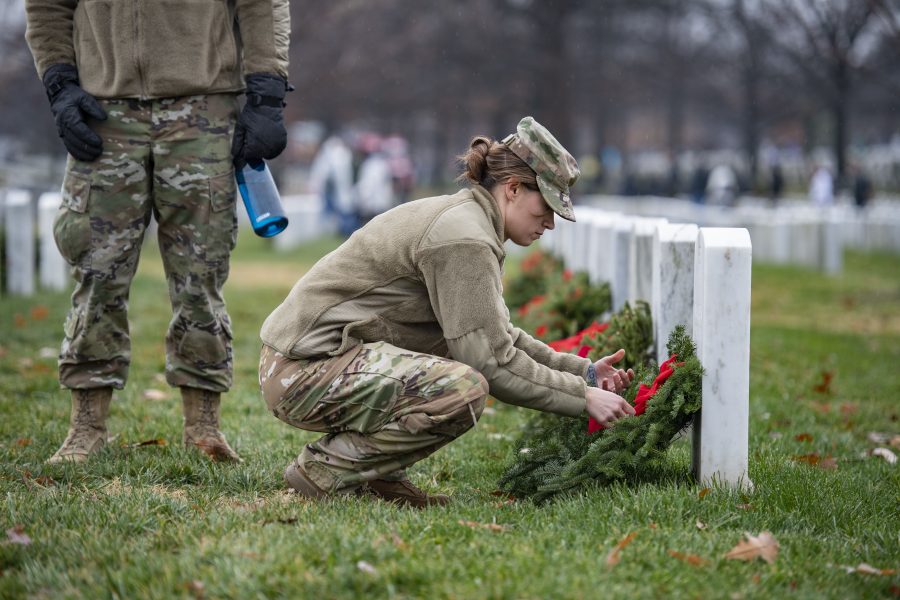 Arlington National Cemetery’s decision to forbid the nonprofit Wreaths Across America from placing holiday wreaths on the graves of the fallen veterans laid to rest on its hallowed grounds—as well as at the United States Soldiers’ and Airmen’s Home National Cemetery in Washington—this year due to the COVID-19 pandemic has been reversed.

“I am very pleased to report that today we were able to have these discussions with the cemetery’s leadership team, and they have informed us of their willingness to work with us to develop other options to allow the safe placement of veterans’ wreaths this December,” Wreaths Across America Executive Director Karen Worcester told reporters on a Nov. 17 press call.

But the question of where that decision came from has evolved into a political whodunnit of the do-gooder variety.

The change in course came less than 24 hours after the cancellation was initially announced. The cemetery initially deemed the move necessary due to both the regional and nationwide COVID-19 risk, it wrote in a Nov. 16 release.

“Following a thorough analysis of the annual Wreaths Across America Wreaths-In event this year, and in close collaboration with the Joint Task Force, National Capital Region, we determined that we could not implement sufficient controls to mitigate the risks associated with hosting an event of this size under current and forecasted infection and transmission rates, while still conducting a respectful and honorable public event,” the release stated.

Presenting such a large event threatened its ability to carry out its “core mission of laying veterans and their eligible family members to rest,” stated Karen Durham-Aguilera, executive director of the Office of Army National Cemeteries and Arlington National Cemetery, in the release.

Following the announcement and some Twitter backlash, the nonprofit says it “made some phone calls, emails, [and] pleas to the White House” before organizing the Nov. 17 press briefing.

But 13 minutes before the call kicked off, the organization explained, it received an email from Army public affairs informing it of Army Secretary Ryan McCarthy’s decision. The cemetery posted an identical news update to its website, and McCarthy took credit for the move on Twitter.

The cemetery promised to share details about “the final schedule soon.”

But following the conclusion of the press call, President Donald J. Trump separately claimed responsibility for the reversal in a tweet posted to his personal Twitter account.

The Army referred Air Force Magazine to the White House for comment.

Each December, Wreaths Across America coordinates wreath-laying ceremonies at more than 2,100 national cemeteries across all 50 U.S. states and overseas.

Worcester said that volunteers are getting creative in their strategies to keep the tradition alive while mitigating their COVID-19 risk. Planned strategies include drive-through wreath laying and stretching out the process over the course of multiple days so smaller numbers of people are on site at a given cemetery at the same time, she said. However, there’s no one-size-fits-all solution for participating cemeteries, she added.

“Every single location, every event that we have, is put together by volunteers, and what’s great about that is it’s very hyperlocal, so what might be working for someplace in Colorado may not work for some place in Maine,” she explained during the press call. “So everything is very governed by boots on the ground and listening to the regulations and rules of COVID[-19] as they pertain in that area.”

She also used the press call as an opportunity to encourage the public to consider covering the cost of a wreath for a fallen veteran.

“We’re down a little and we do hope that people will go to our website and continue to support this,” she said.