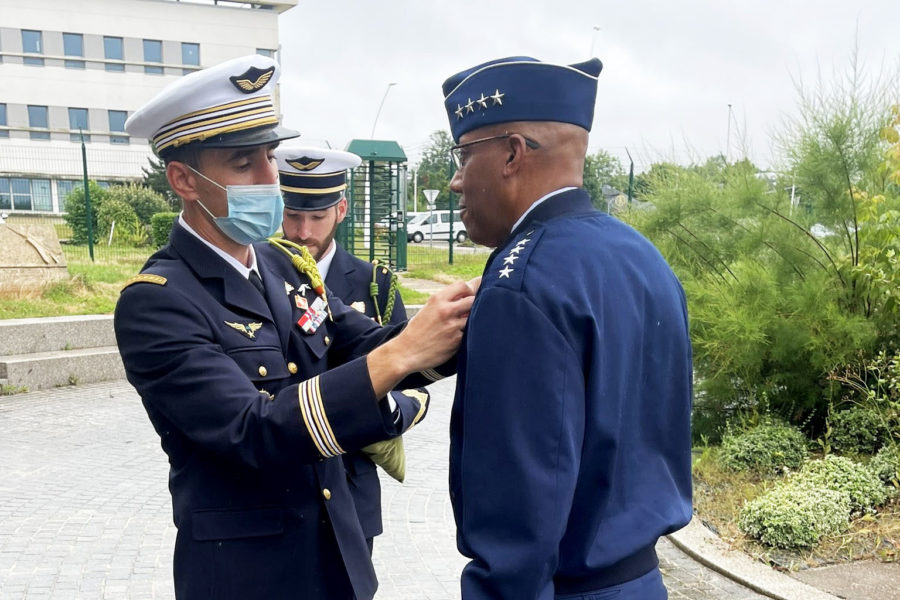 The award was announced by the Air Force on Aug. 30 after a July visit by Brown to the Saint-Dizier/Chaumont defense base in northeast France.

“The pin the escadrille presented to me is part of a 105-year, proud tradition, and this honor represents a strong bond between our two nations,” Brown said, according to an Air Force release.

The Lafayette fighter squadron’s history dates to World War I, when it was known as the American Escadrille N124. At the time, it was manned with 38 American volunteers, mostly aviators, fighting under French command.

A French press release noted the recent return of the French 4th Fighter Squadron, which had joined F-22 Raptors in commemoration of U.S. independence.

“This visit confirms the will of the two nations to strengthen bilateral cooperation,” the French release stated.

Brown was also presented with a painting by French artist Béatrice Roche Gardies of Eugene Bullard, who in August 1917 became the first African-American military pilot to fly in combat.

Bullard at the time was living in Paris and enlisted in the French Foreign Legion, earning the Croix de Guerre and reaching the rank of corporal. After retirement, Bullard fought again in World War II following the German invasion of France in May 1940.

“I’m humbled to receive these honors,” Brown said in a press release. “Heroes like Eugene Bullard made incredible advancements to aviation and paved the way for so many.”