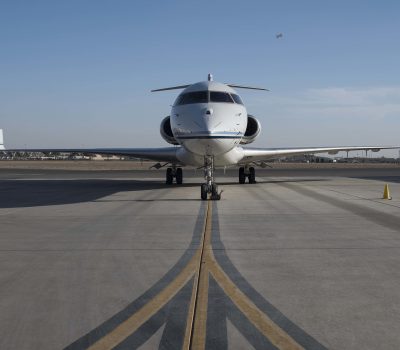 By Brian W. Everstine
Air Force Chief of Staff Gen. David Goldfein confirmed an E-11A Battlefield Airborne Communications Node crashed in Afghanistan on Jan. 27, but said it’s still unclear if there were any casualties. US Forces-Afghanistan spokesman Col. Sonny Leggett said in a statement it does not appear the appear the aircraft was brought down by enemy fire, saying "Taliban claims that additional aircraft have crashed are false." The Air Force maintains a small presence of the E-11 aircraft at Kandahar Airfield, which is used as a bridge between communication devices for forces on the ground. 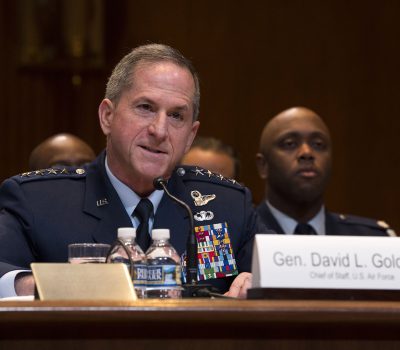 By John A. Tirpak
Combat platforms are taking a back seat to all-domain command and control in the fiscal 2021 defense budget, Air Force Chief of Staff Gen. David Goldfein said Jan. 27. Wargames have shown that connecting all platforms with all other platforms and sensors has a bigger impact than having more platforms in a notional 2030 fight, he said at a Center for New American Security program. Space will be a large area of investment, with counter-space capability included, he said. Other priorities will be logistics and a mix of standoff and stand-in capabilities. 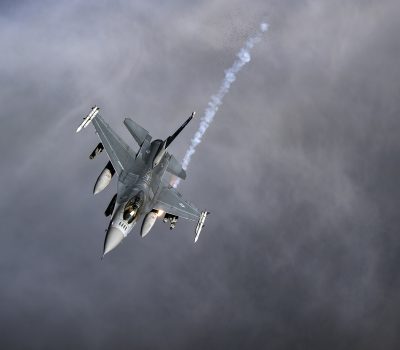 By Brian W. Everstine
US strike aircraft dropped more bombs in Afghanistan in 2019 than any other year since at least the surge in 2009. US aircraft flew 2,434 strike sorties, releasing 7,423 weapons, according to statistics released Jan. 27 by Air Forces Central Command. These totals are higher than any other annual tally released by AFCENT, whose online archives date back to 2009. The previous high was 7,362 weapons released in 2018. There also was a sharp increase in US intelligence, surveillance, and reconnaissance sorties in 2019. 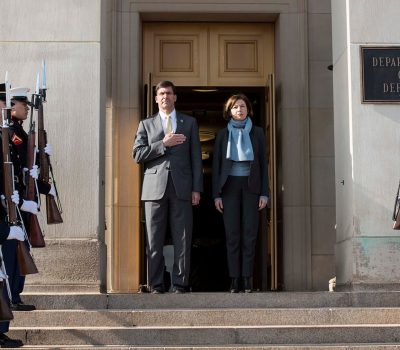 By Brian W. Everstine
The head of France’s military used her visit to Washington to press the Pentagon to maintain its operations in the Sahel region. “The US support is critical to our operation,” French Minister of Armed Forces Florence Parly said during a Jan. 27 press briefing alongside Defense Secretary Mark Esper. “Any reduction would limit our effectiveness against terrorists.” The visit comes as the Pentagon reviews the US military’s global force structure, with the overall goal of reducing personnel deployments in certain areas and realigning focus to the Indo-Pacific or bringing units home for training. The Africa review is ongoing, and a review of US Southern Command began last week. There’s “no decision made, and in due course we will make them,” Esper said Jan. 27.

Nighttime Rocket Attack on US Embassy in Baghdad Injured 1

A nighttime rocket attack on the US Embassy in Baghdad injured one person and caused some material damage, staffers there said Jan. 27. The two staff members, who spoke on condition of anonymity because they were not authorized to brief the media, did not specify the injured person’s nationality or the severity of their wounds.

Imagery Suggests Iran Is Preparing To Try To Launch A Satellite

The imagery, taken Sunday by the commercial firm Planet and shared via the Middlebury Institute of International Studies at Monterey, shows vehicles parked at a building used to assemble Iran's space rockets at the Imam Khomeini Space Center in northern Iran. A second group of vehicles is visible at a circular launch pad that was heavily damaged during failed launch preparations last year.

All five crew members from a Navy MH-60S Seahawk helicopter were rescued when the aircraft crashed in the Philippine Sea on Jan. 25, Navy officials said. The aircraft, assigned to the amphibious command ship Blue Ridge, went down around 5:15 p.m. local time during routine operations, officials said in a news release.

The US conducted a turnover and dedication ceremony of a new C-130 hangar to the Nigerien Air Force at Nigerien Air Base 201 on Jan. 22.

Lockheed Adds Dunford, Former Top US Military Officer, to Board

Lockheed Martin has added Marine Gen. Joseph Dunford, the former chairman of the Joint Chiefs of Staff, to its board of directors, the company announced Jan. 24.

OPINION: Why Does the US Spend So Much on Defense?

“It is well to remember that the real bill includes not just DOD spending but VA, intelligence, and more,” writes Patrick Collins, a former US European Command defence economist and a former Defense Intelligence Agency intelligence officer. “But those who would cut spending must also propose a new strategy.”

Tax season can be a dreaded time of year for many people, but the Defense Department's Military OneSource offers the MilTax program to ease filing stress for service members and their families. Active duty service members and their families, National Guard members and Reservists, survivors, and veterans who have left the service in the last 365 days all qualify to use the free MilTax program, which kicked off on Military OneSource on Jan. 22.

After a neighborhood was evacuated for nearly 24 hours when Stockton, Calif., police found apparent military explosives at a home, Travis Air Force Base officials said Jan. 24 the devices were replicas.