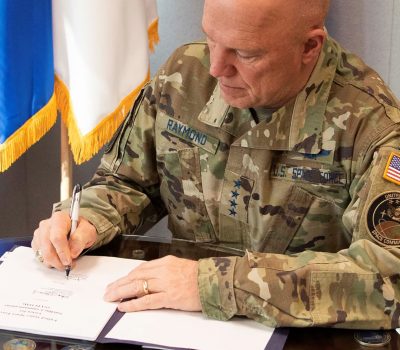 By Rachel S. Cohen
Chief of Space Operations Gen. Jay Raymond has signed into effect a new strategy for making satellite communications more resilient and effective as U.S. adversaries try to chip away at those capabilities. “Despite the global, instantaneous reach of our SATCOM capabilities, which includes both military and commercial capabilities, the enterprise needs to improve its resiliency, robustness, flexibility, and manageability,” according to the strategy paper released Feb. 19. “We must prepare now to fight SATCOM as a single enterprise through a contested, degraded, and operationally limited environment, prevent or withstand loss, and continue to deliver effects to warfighters.” 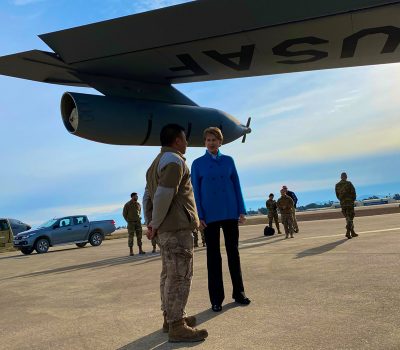 By Jennifer-Leigh Oprihory
Air Force Secretary Barbara Barrett visited Airmen at Incirlik Air Base, Turkey, Feb. 15 amid continuing tensions over Turkey's ouster from the F-35 program and a December threat by President Recep Tayyip Erdogan to shutter the base over political censure from Washington. While her visit was Airman-focused, and included meetings with members of the 39th Air Base Wing and resilience-related conversations with its Airmen, Barrett stressed the urgency of USAF’s continued operations in the country, calling the service's presence there "the bedrock of our ability to assure our partnership" and to "respond to threats as required." 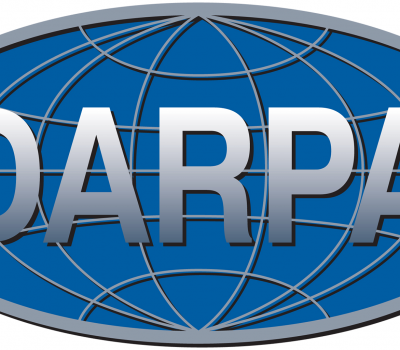 By Rachel S. Cohen
DARPA wants to bring a gun to a missile fight. The Defense Advanced Research Projects Agency is developing “Gunslinger,” a new air-launched missile equipped with a gun, for Air Force and Navy missions ranging from counterterrorism to dogfights with other aircraft, according to the fiscal 2021 budget request. The Air Force and Navy are also potential customers for DARPA’s LongShot program, which would use “multi-mode propulsion” to significantly boost its range and effectiveness against multiple airborne threats at once. 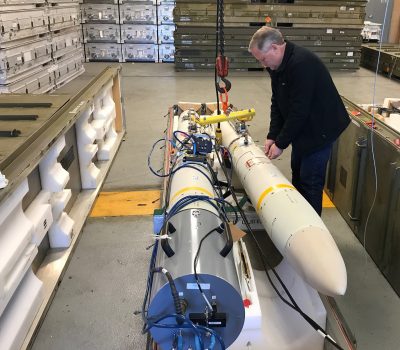 By Rachel S. Cohen
The Air Force is moving forward with its Stand-In Attack Weapon, preparing to check how it fits inside the F-35 Joint Strike Fighter this summer. Though the service previously said the missile would fly on the B-21 as well, Air Force spokeswoman Ilka Cole said the F-35 is now the only USAF aircraft under consideration. Fit checks will entail wind tunnel testing and ground tests. The weapon is based on the extended-range version of the Navy’s Advanced Anti-Radiation Guided Missile in development at Northrop Grumman. Cole said missile design specifications like its range are classified. 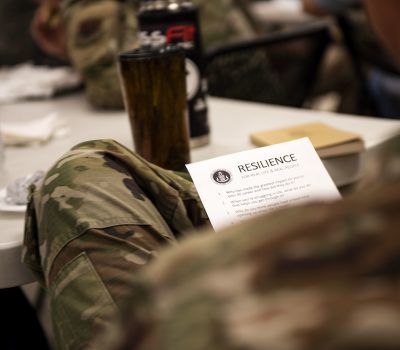 By Jennifer-Leigh Oprihory
Air Combat Command on Feb. 18 launched a new website that looks to connect ACC Airmen with resources related to resilience, suicide and violence prevention, and diversity. "The Bridge" was borne out of feedback from conversations that occurred during the service-wide resilience tactical pause that Chief of Staff Gen. David Goldfein ordered last summer in response to a rising suicide rate among USAF Airmen.

Defense Secretary Mark Esper used his first-ever visit to a nuclear missile field in frigid North Dakota to tout the Trump administration's multibillion-dollar plan for a top-to-bottom modernization of the nuclear arsenal. The costly project is necessary, he said, to keep up with Russia and outpace China.

The calamities were just two of 28 Class A aviation-related mishaps, or accidents that involve fatalities, severe damage totaling $2 million or more or a complete loss of the aircraft, that the Air Force sustained in fiscal 2019, according to data recently provided exclusively to Military.com.

Graduates from the U.S. Air Force Academy in Colorado are expected to cross-commission into the Space Force this spring, military officials said. About 60 cadets would be commissioned into the new armed service branch, which formed in December. “They’re doing Air Force Academy curriculum, and they’ll just be directly commissioned into the Space Force,” academy Vice Superintendent Col. Houston Cantwell said.

Sometimes, when lives are at stake, even Silicon Valley can’t innovate fast enough. That’s why the director of the Defense Digital Service, Brett Goldstein, has started forming rapid-response “SWAT teams” drawing on the Defense Department’s in-house talent. The first such team that Goldstein has created—pulling together both existing DDS personnel and a Defense Innovation Unit project called Rogue Squadron—is aimed at countering small drones.

After more than a year of deliberations, the U.S. Air Force is hoping to have a fix in hand for the KC-46 tanker’s most critical technical problem by the end of March, the service’s top general told Defense News in an exclusive interview. The hope is for the Air Force and Boeing to sign off next month on a finalized design for the KC-46’s Remote Vision System, or RVS—a series of cameras and sensors that allow its users to steer the aircraft’s boom into a plane for aerial refueling.

Reuters interviewed more than a dozen officials and soldiers and spoke with brain-injury specialists to assemble the most comprehensive account so far of the nature of the soldiers’ injuries and how they sustained them. The slowly rising casualty count underscores the difficulty in detecting and treating what has become one of the most common injuries in the U.S. military during two decades of war in Afghanistan and Iraq, where U.S. troops face roadside bombs, rockets and mortars.

The U.S. Navy Just Got Its Hands on a New Kind of Iranian Missile

Environmental groups, led by the nonprofit legal firm Earthjustice, allege the Defense Department violated the National Defense Authorization Act of 2019, which spelled out guidelines for safely incinerating firefighting foam containing perfluoroalkyl and polyfluoroalkyl substances, also known as PFAS. The groups allege DOD entered into three contracts between November 2018 and May 2019 to incinerate more than 2 million gallons of stockpiled waste despite having concerns about the disposal process.

The agency that secures the U.S. military’s information technology infrastructure across the globe says sensitive personal data, including Social Security numbers, hosted on its network may have been compromised in a breach between May and July 2019. The Defense Information Systems Agency notified potential victims of the breach in a letter this month, saying it had tightened protocols for protecting personally identifiable information because of the incident.

The Air Force is taking a servicewide approach to reskilling with its "Digital U" program. Air Force Deputy Chief Information Officer Bill Marion said that initiatives like Digital U were part of the service's push to train all personnel in cyber capabilities, unlike other government programs like the Federal Cyber Reskilling Academy that targeted reskilling individuals who displayed technical aptitude.