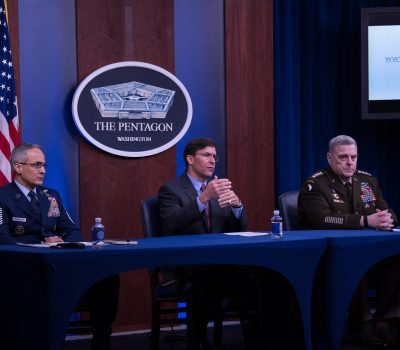 DOD on Coronavirus Pandemic: ‘We Will Get Through It’

By Brian W. Everstine
The crisis caused by the new coronavirus outbreak could take months and weaken military readiness, though that drop is expected to be small, the top military leaders told service members in an online town hall March 24. Chairman of the Joint Chiefs of Staff Gen. Mark Milley, Defense Secretary Mark Esper, and USAF Chief Master Sgt. Ramón Colón-López, the senior enlisted adviser to the Chairman, took submitted questions from the military community for a live-streamed town hall. When asked when the outbreak will end and operations will return to normal, Milley said, “Nobody knows that ... But we will get through it. It’s not a question of when, we will get through it. And we’ll pull together as a country and as a military.” 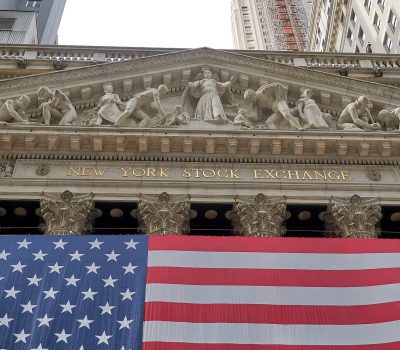 Analysis: Defense Stocks May Take Years to Recover from COVID-19

By John A. Tirpak
Massive spending to combat the coronavirus pandemic may suppress defense spending and therefore defense stock prices, which have tanked to the tune of more than 30 percent in the last month, according to defense and aerospace analyst Byron Callan of Capital Alpha. Congress may also move to spend more on the National Guard and refuse to retire old USAF aircraft, he noted. “It’s going to take a couple of years” for a recovery in defense stocks, said Callan, who specializes in the defense and aerospace industry. Unlike the attacks of 9/11, the COVID-19 crisis “touches every American,” he told Air Force Magazine. 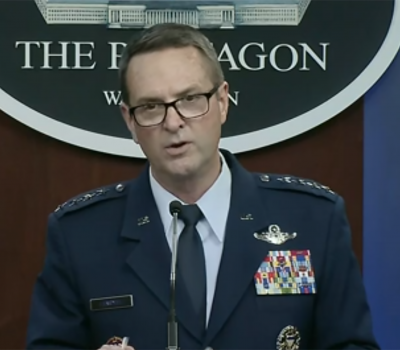 By Jennifer-Leigh Oprihory
As of the morning of March 24, the National Guard Bureau is tracking 26 positive cases of the COVID-19 virus among its personnel, including one in a headquarters staff member, NGB Chief Air Force Gen. Joseph Lengyel said. Also as of early March 24, more than 9,000 Guard personnel have been activated as part of their states' fights against the new coronavirus, some under Title 32 authority from the President. However, Lengyel said, “It wouldn’t surprise him” if that number topped 10,000 “by the afternoon.” Governors and state adjutants general have informed him of near-term plans to activate “hundreds and thousands” more personnel to support state-level pandemic response, he added. 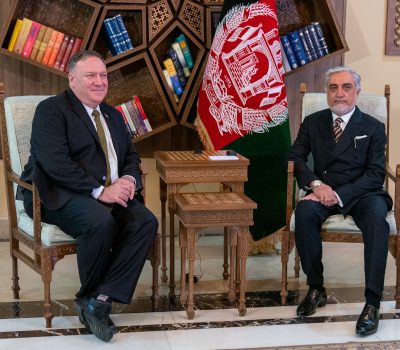 By Brian W. Everstine
The U.S. will immediately cut assistance to the government of Afghanistan by $1 billion because of leadership failures at the top ranks in Kabul, with plans to cut another $1 billion next year, Secretary of State Mike Pompeo announced March 23. Afghan President Ashraf Ghani and former Chief Executive Abdullah Abdullah each declared themselves victors of the country’s recent presidential election, with both men even holding their own inaugurations earlier this month. Pompeo made an unannounced visit to Kabul on March 23 and tried unsuccessfully to help the two reach a deal for a government to move forward. “The United States is disappointed in them and what their conduct means for Afghanistan and our shared interests,” Pompeo wrote in a statement. 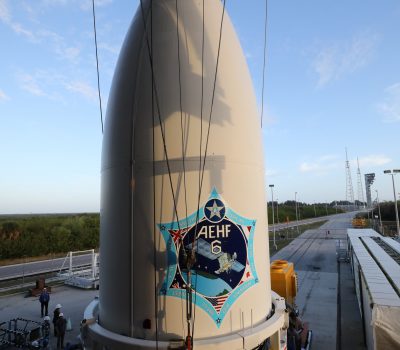 By Rachel S. Cohen
The Space Force’s first launch under the National Security Space Launch program is moving forward, despite the threat of coronavirus, to put the sixth and final Advanced Extremely High Frequency satellite on orbit March 26. By adding the sixth AEHF satellite, U.S. troops should expect to see more reliable transmission of data used for real-time video, battlefield maps, and targeting. It also allows for stronger, more jam-resistant communications between national leaders like the President and Joint Chiefs of Staff. It is also the second time a rocket will drop off a secondary payload that is hitching a ride ahead of the main mission. Brig. Gen. Douglas Schiess, 45th Space Wing commander at Patrick Air Force Base, Fla., said precautions taken to avoid spreading coronavirus aren’t expected to affect the mission.

Troops Say the U.S. Military is Not Taking COVID-19 Seriously

"This is a telling indicator of leadership failure," said one Army officer. "Unfortunately, the outcome has about a two week delay."

Coronavirus Threat Prompts VA Request for Doctors, Nurses to Come Out of Retirement

As the number of coronavirus cases within the Veterans Affairs medical system continues to climb, department officials are reaching out to retired health care workers for help.

The Trump administration unveiled a new initiative to help researchers worldwide harness a range of America’s most powerful high-performance supercomputing resources to deliberately accelerate new discoveries in the fight against COVID-19. Through the COVID-19 High Performance Computing Consortium, scientists can tap into 16 of America’s top computing systems.

President Donald Trump intends to nominate John Whitley to be director of the Defense Department’s cost assessment and program evaluation office, according to a White House announcement. Whitley currently serves as assistant secretary of the Army for financial management and comptroller.

Marines to Shut Down All Tank Units, Cut Infantry Battalions in Major Overhaul

In the next decade, the Marine Corps will no longer operate tanks or have law enforcement battalions. It will also have three fewer infantry units and will shed about 7 percent of its overall force as the service prepares for a potential face-off with China.

The Air Force attempted to answer questions from The Drive, but the Defense Department official in charge of UFO inquiries didn't share their findings or anything at all.